Federal court motions claiming misappropriation and trespass were filed on Thursday, May 15, 2014, against a Florida salvage company by the Ohio-based group that first discovered and recovered Gold Rush-era sunken treasure from the S.S. Central America, the fabled “Ship of Gold” that sank in 1857.

Columbus-America Discovery Group (CADG) claims that Odyssey Marine Exploration, Inc. is in violation of the law. CADG is asking that U.S. Marshals immediately seize all the treasure recently salvaged by Odyssey from the Central America. The recovered items currently are in Charleston, South Carolina, according to the court motions. 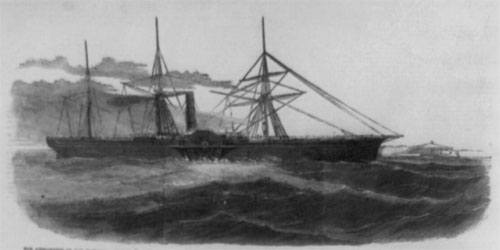 The S.S. Central America, a 278-foot long sidewheel steamer, was sailing from Panama to New York City with tons of California Gold Rush-era coins and ingots when it sank in a hurricane on September 15, 1857. There were 447 passengers and 101 crew members; 425 of them died when the ship sank.

In addition to the human tragedy, the loss of the expected gold in New York led to the financial “Panic of 1857” that resulted in the closings of some banks and factories. A 1992 Life Magazine cover story proclaimed the recovered gold, “The greatest treasure ever found.”

During a scientific expedition in 1987, CADG originally located the wreck site in the Atlantic Ocean about 160 nautical miles off the coast of South Carolina and subsequently recovered thousands of gold coins and hundreds of gold ingots. CADG claims it still has the exclusive rights to that site and any retrieved gold and artifacts. CADG wants the federal court to reassert the company’s protected rights to any additional treasure found at the site.

The motions filed Thursday with the United States District Court, Eastern District of Virginia in Norfolk, Virginia, ask that federal marshals seize the latest items and any future items recovered by Odyssey and turn them over to CADG. The items are believed to still be on board the vessel OSV Odyssey Explorer now docked in Charleston, South Carolina, according to CADG’s court filings.

“Columbus-America Discovery Group, which has done several previously impossible feats in the deep ocean and has been sued and challenged continuously for more than 20 years, is still fighting for its right to the deep ocean shipwreck site of the SS Central America,” said Milt Butterworth, CADG President.

“We are asking the court to uphold our permanent injunction, and allow CADG to fulfill its original purpose: to conduct multi-disciplinary research and develop sophisticated deep-ocean technology, and to locate, explore, and recover the remains of the S.S. Central America.,” Butterworth stated.

One of the court motions states: “On or about April 14th an expedition aboard the OSV ODYSSEY EXPLORER…intruded into the injuncted sea area

without the Court’s knowledge and permission….”

The motion also states: “In order to protect its Court awarded rights and its maritime lien interest in any gold or artifacts recovered from the wreck of the S.S. CENTRAL AMERICA, it is imperative that CADG be authorized by the Court to have the U.S. Marshal execute a warrant in rem against these same artifacts….”

CADG claims that Recovery Limited Partnership and its contract-salvor Odyssey Marine Exploration “and any person aiding, abetting and/or assisting the violation of the rights and protections of CADG are interlopers, have engaged in acts of conversion, misappropriation of tangible and intellectual property rights, trespass, violation of CADG’s injunctive, possessor, salvage and other rights, and have violated the permanent injunction.”