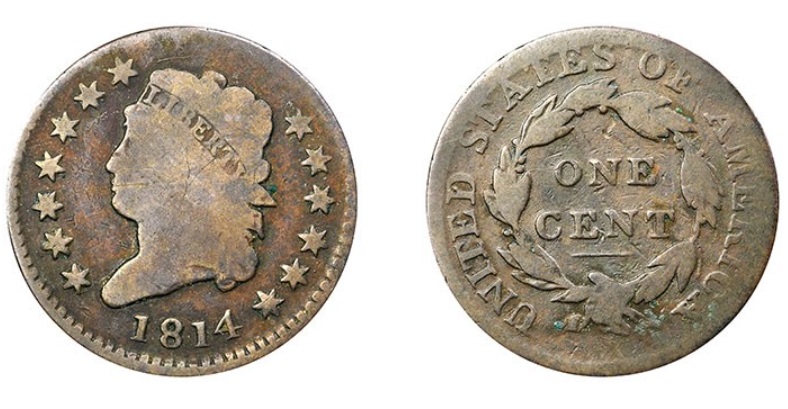 This coin’s identity crisis can be traced to some missing metal.

The Classic Head cent was a short-lived seven-year series from 1808 to 1814, with a few commonly recognized varieties in the Guide Book of United States Coins (the Red Book). The 1814 cents had a mintage of 357,380 and a diameter of 29 millimeters, bigger than today’s quarters.

The copper used for this series wasn’t the best quality, which is reflected in NGC’s Census data. Survivors tend to bunch up at the bottom of the grading scale due to extensive use and the poor alloys. Collectors who target the more-modest grades can complete a set for a few thousand dollars.

NGC recently received a coin that had been altered to appear to be an 1814 cent. But as you can see by the images below, while time has erased much of the details of the design, it is clear that the silhouette of Liberty on the front is from a later series. The shape of Liberty’s hair at the forehead and the base of the neck indicates that it is a Braided Hair (1839-1857) rather than a Coronet Head (1816-1839), which has a similar profile. It is clearly not a Classic Head. 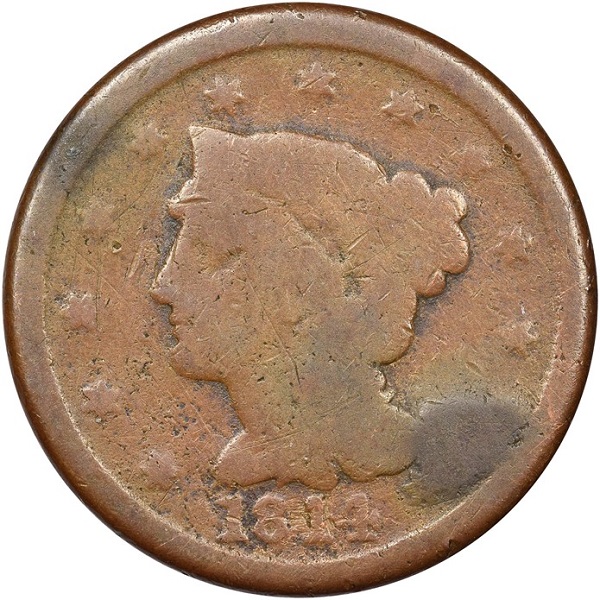 Given that the apparent date on the coin doesn’t correspond with its design, it is prudent to closely inspect the digits of the year at the bottom of the obverse. There is some obvious tooling around the second “1” in the date, where the color of the metal is noticeably different. This was caused by the counterfeiter scraping away excess metal from the original digit.

Closeup of date on altered coin.

After 1857, the size of cents shrunk considerably, and their obverse design changed to a flying eagle, then an Indian princess, and finally the familiar bust of Abraham Lincoln. Therefore, we can extrapolate that the original date on the altered coin was 1844, since the shape of other numbers would have required re-working the entire digit.

The 1844 cent had a diameter of 27.5 millimeters and a mintage of nearly 2.4 million, more than six times that of the 1814 cent before the alteration, this 1844 cent was likely purchased for just a few dollars.

NGC’s expert grading team is aware that the recent surge of interest in coin collecting from those who are not well-versed in numismatics may incentivize counterfeiting. Whether a coin is worth millions of dollars or far less, NGC backs its determinations of authenticity and grade with the NGC Guarantee.

Did you know? NGC has created a comprehensive Counterfeit Detection resource to help collectors and dealers identify counterfeit and altered coins. Click here for more information.