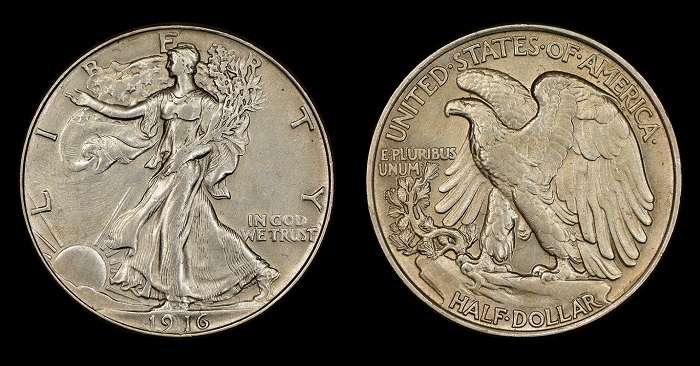 In 1946 the Philadelphia Mint struck more than 12.1 million Walking Liberty half dollars. Today, those coins are worth perhaps $20 each in About Uncirculated grade. The 1916 (P) Walking Liberty, however, had a mintage of only 608,000, and a specimen is worth at least 10 times more than a 1946 example in the same condition.

Obviously, with just a one-digit difference in date, the 1946 half dollar is a prime candidate for alteration. A case in point is the 1916-dated half recently submitted to Numismatic Guaranty Corporation (NGC). It is immediately apparent that the coin is a genuine mint product, with good detail overall. But perhaps the detail is a bit too good for a 1916 specimen.

Many collectors don’t realize that the mint made a subtle change in the design of the Walking Liberty half in 1918. In addition to strengthening the lines in the flag and dress, it also lengthened the thumb on Liberty’s outstretched hand. These slight design variations can be used to determine if a coin was struck pre-or-post-1918. In the photographs below, note the short thumb and lack of detail in the billowing flag on the genuine 1916 specimen. The altered piece shows the same long thumb and enhanced flag detail as the authentic 1946 example.

From left to right: Genuine 1916, altered, genuine 1946. The length of Liberty’s thumb is shorter and the flag details less distinct on the 1916 specimen. Hover to zoom.

The date on the altered piece also is problematic. In the photos on the following page, the spacing between the “9” and the second “1” in the dates of the two 1916 pieces are different. The second “1” on the altered piece almost certainly was once a “4,” as the space to the left is too wide. This spacing more closely matches that of the genuine 1946.

Additionally, the style of the second “1” doesn’t match the first, as it resembles a Roman numeral rather than the proper Arabic numeral. The strengthened dress lines from the 1918 hub change are very easy to see on the altered specimen and 1946 coin. 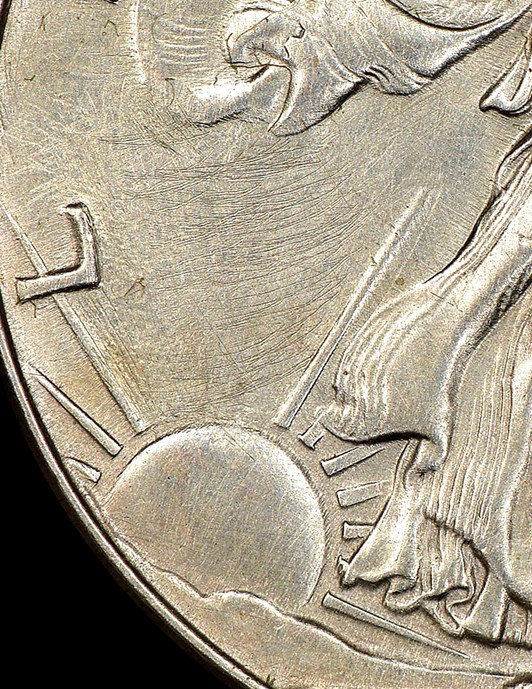 Three rays on the altered half dollar were inexplicably removed. Perhaps the forger was honing his technique.

Last, but not least, the obverse of this coin has been extensively tooled. Note how the middle three rays of the sun have been obliterated. It is unclear why this was done, as it makes no sense to call more attention to the coin by eliminating such major design elements. Perhaps this was a practice piece for a “coin doctor.”


This altered half dollar is not particularly deceptive. However, it shows that forgers always are honing their skills to make their products more convincing. Therefore, collectors must be vigilant and keep their eyes open for counterfeits and alterations. And remember, every coin graded and encapsulated by NGC is guaranteed to be authentic.

Reproduced with permission from the November 2017 edition of The Numismatist, official publication of the American Numismatic Association.