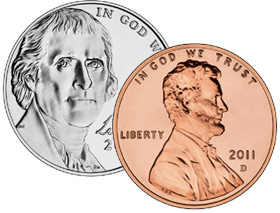 The cost for the United States Mint to produce and distribute the cent and nickel rose to their highest levels, and are now more than double the respective face values. For the fiscal year ending September 30, 2011, the unit cost for the cent was 2.41 cents and the cost for the nickel was 11.18 cents.

The cost for the two lowest circulating denominations increased compared to the prior year due to higher material costs and a change in the method of allocation for sales, general, and administrative expenses. In previous years, the Mint allocated SG&A expenses based on gross margins. For the 2011 fiscal year, costs were allocated based on the costs to manufacture, market, and distribute. The new approach conforms to accounting standards and leading commercial and public sector practices.

This represents the sixth year in a row that the cost to produce and distribute the cent and nickel have exceeded their face values. For the 2011 fiscal year, the two denominations were produced at a loss of $116.7 million. This amount is nearly triple than the loss of $42.6 million generated from the two denominations during the prior year.

Although the cent and nickel have generated significant losses in recent years, the positive seigniorage generated by higher denomination circulating coins has offset the losses. For the 2011 fiscal year, production of the dime, quarter dollar, and $1 coin for circulation generated seigniorage of $488.8 million.

In December 2010, Congress passed the Coin Modernization, Oversight, and Continuity Act of 2010, which authorizes the Treasury Department to conduct research and development activities with regards to circulating coin compositions. Any changes in composition would still need to be accomplished by an act of Congress. The US Mint has engaged a contractor to conduct the research and development, which will serve as the basis for the report to Congress due in December 2012.

On December 15, 2011, Rep. Steve Stivers introduced two bills which would require the the composition of the cent and nickel to be produced primarily of steel within 90 days of enactment. The bills have two cosponsors and both been referred to the House Committee on Financial Services.