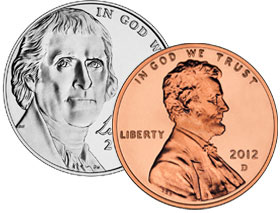 The cost for the United States Mint to produce and distribute the cent the the nickel fell for the 2012 fiscal year, mostly as the result of lower metal costs. Despite the decline, costs were still about double the respective face values of the two lowest circulating denominations.

In addition to the reduction in metals costs, plant expenses at the Philadelphia and Denver facilities decreased by about 3%, and Selling, General, and Administrative costs decreased by 2.8%.

For the 2012 fiscal year, the US Mint produced and shipped 5.835 billion cents and 1.006 billion nickels. The production and distribution of the penny generated a loss of $58.0 million, while the nickel generated a loss of $51.2 million, resulting in a total loss of $109.2 million across both denominations. These figures represented slightly smaller losses than the prior year, when the loss from the cent was $60.2 million and the loss from the nickel was $56.5 million, for a total loss of $116.70 across both denominations.

Although the cent and nickel have been produced at a loss in recent years, the positive seigniorage generated by higher denomination circulating coins has always more than offset the losses. For the 2012 fiscal year, seigniorage across all denominations remained at a positive $105.9 million. This is down by 69.6% from the prior fiscal year when seigniorage generation was $348.8 million. The decline is attributable to the suspension of production for the Presidential $1 Coins.

The US Mint is in the process of performing research and development activities with regards to alternative metallic materials for circulating coins. Under the Coin Modernization, Oversight, and Continuity Act of 2010, the Mint is due to provide a report of their findings and suggestions to Congress later this month.

During a recent House Subcommittee hearing, the Acting Director of the United States Mint Richard A. Peterson reported that a research and development laboratory at the Philadelphia Mint had conducted two sets of trial strikes on a variety of metallic compositions and evaluated them for attributes such as hardness, ductility, corrosion, wear resistance, electromagnetic signature, availability of raw materials, and cost.

While a compositional change might improve the situation for a nickel, it would not reduce the cost of producing and distributing the cent below its face value. In response to a question at the hearing Peterson said, “If the metal for the penny were free, we would still exceed one cent.”