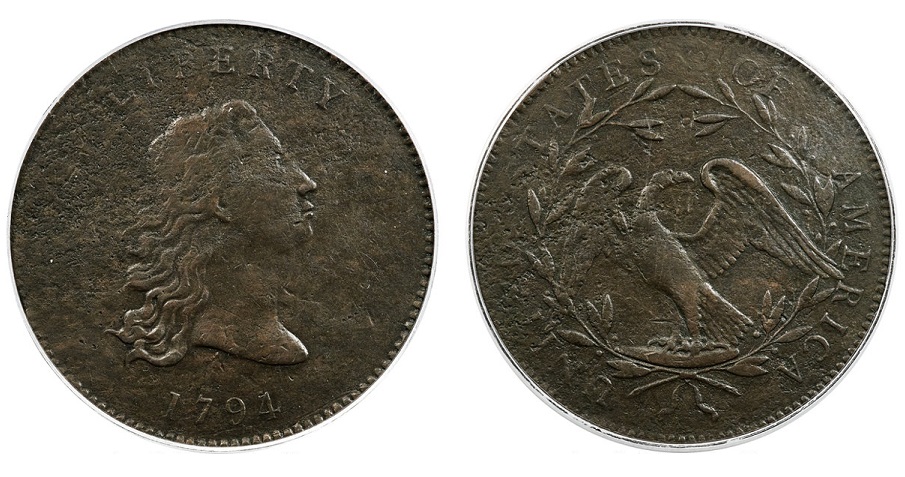 Dallas, Texas (April 23, 2021) — The first dollar coin struck at the fledgling U.S. Mint in 1794, an experiment in copper that would become the pattern for more valuable silver versions minted later, sold for $840,000 at Heritage Auctions Friday, April 23. Referred to as the “No Stars Flowing Hair dollar,” it opened at $312,000 when it was put up during a live auction Friday evening. In less than a minute, intense bidding quickly pushed the coin beyond expectations it would sell between $350,000 and $500,000.

The 230-year-old dollar has been off the market for 20 years, residing in the private collection of Bob R. Simpson, part-owner of the Texas Rangers baseball team and a lifelong Texas energy executive. Simpson purchased the coin in 2008. Simpson has been selling highlights from his collection through Heritage Auctions, which have so far totaled more than $54 million.

The unique rarity was excavated from the site of the first Philadelphia Mint before 1876, according to the coin’s first owner at its first auction appearance in 1890. “This coin has traded hands just eight times during the last 230 years,” said Jacob Lipson, a numismatist and cataloger at Heritage Auctions. “This is a coin of nearly unsurpassed historical significance.”

The front of the coin features the adopted Flowing Hair portrait of Liberty with LIBERTY above and the date, 1794, below. The reverse is the regular-issue silver dollar design with a Small Eagle standing on a rock within a wreath and UNITED STATES OF AMERICA around the border. The copper coin features a lettered edge that reads HUNDRED CENTS ONE DOLLAR OR UNIT with ornamentation between the words.

Experts have spent more than two centuries researching the prototype, which closely resembles later silver dollars minted in Philadelphia, which now command $4 million to $5 million each. The variations between this copper piece and its silver counterparts make it unique among dollars struck following the Mint Act of April 2, 1792, because it is missing telltale decorative stars on coins stamped later.

“It’s all in the stars,” Lipson said. “Similar ‘starless coins,’ such as a copper half dime, are held in the Smithsonian Institution’s National Numismatic Collection and this copper dollar is considered the companion piece to the half dime.”