The 1935 Connecticut Tercentenary Commemorative Half Dollar is a somewhat underrated issue that was quite popular at the time of issue, selling out of the entire authorized mintage. While this issue is not considered to be the scarcest, most beautiful, or most difficult to find early commemorative half dollar, it is an issue whose intricate design and historical interest make it a very worthwhile one to discuss.

Connecticut has been home to indigenous tribes for thousands of years before first explored by Europeans (the Dutch) in the early 17th century. Settlement (by the English) came in the mid 1630s, when numerous small towns arose along the Connecticut River and its tributaries, the main body of which drains into the Long Island Sound.  Initial settlement by the English was not the Connecticut Colony, which would be founded in 1636, but the Saybrook Colony settled a few months early in late 1635. Settled by John Winthrop (who was the son of the Governor of the Massachusetts Bay Colony) that particular colony never thrived and is more or less forgotten, and it joined the Connecticut Colony less than 10 years later, in 1644.

There also was the New Haven Colony, which was another separate colony founded in what is now the state of Connecticut, but not until 1637. It was somewhat successful in trading with both the Dutch as well as other English traders, thanks to its location on the Connecticut River. It was founded by a Puritan minister as an exile when it appeared to their leader, John Davenport, that other colonies were lacking in their religious observances. The colony existed for almost thirty years, until it merged with the Connecticut Colony as well in 1665.

As for the Connecticut Colony itself, it had originally been known as the River Colony, no doubt because of the sheer importance of the Connecticut River during early settlement and afterwards. In 1662 Connecticut received a Royal Charter from King Charles II of England. During this period, and in fact into the 19th century, Connecticut was somewhat unusual in that there was no separation of powers, and the legislative branch of government generally had it’s say over both the judiciary and executive branches of government. In addition to this, the Royal Charter gave unprecedented power to the Governor of the colony, and overall the situation was among the more confusing in the new world. 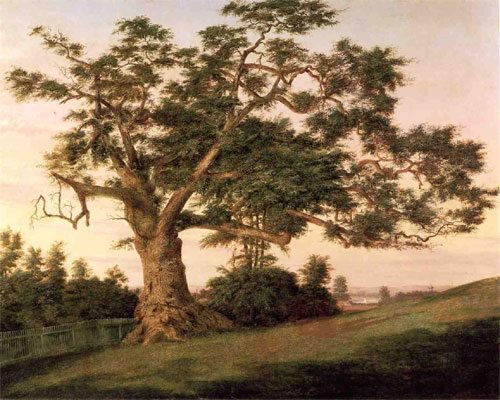 Because of its importance to Connecticut history (and folk legend) the Charter Oak was prominently featured on the obverse of the 1935 Connecticut Tercentenary, designed by Henry G. Kreiss. The Oak itself, which stood outside of Hartford, Connecticut and had been important to the Native Americans for hundreds of years, fell in a violent storm in 1856. A year later artist Charles De Wolff Brownell forever immortalized the tree in an oil painting, titled “The Charter Oak”, and his painting was the source for the design of the coin less than a century later. 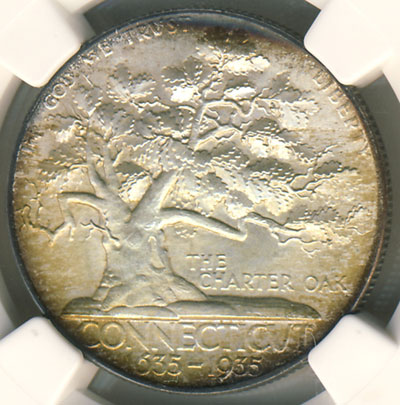 The tree, in full bloom with long branches extending to its right side, takes up most of the obverse of the coin. Part of the ground is visible, but no other visual elements can be seen. Below the oak, in capital letters, is “CONNECTICUT”, and below that are the dual dates 1635-1935. In the upper left near the rim is “IN GOD WE TRUST” and on the right side is “LIBERTY”. The tree on the coin bears a striking resemblance to the painting of De Wolff Brownell, and the tree appears very naturalistic and lifelike. 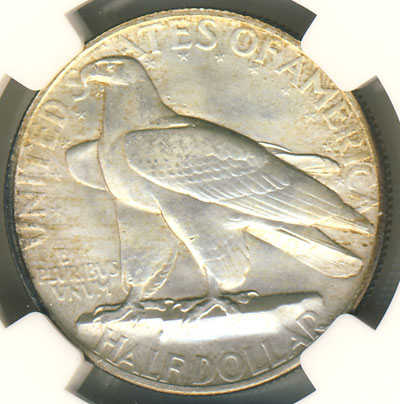 The reverse features an American Eagle, facing left. Perhaps it can be considered to be among the finest appearances of this bird on an American coin, as once again the scene is rather naturalistic. The eagle stands on what appears to be a branch, which has the denomination as “HALF DOLLAR” right below it. In the lower left field is the motto “E PLURIBUS UNUM” and from about 9 to 3 o’clock are the words UNITED STATES OF AMERICA. Right below this are thirteen stars, representing the original thirteen colonies of the United States (including Connecticut, of course).

As previously mentioned a total of 25,000 coins were struck at the Philadelphia Mint, plus a small number of assay coins and reportedly four proofs, which are very rarely seen. This issue sold well, and remains in demand, with many high grade examples surviving in MS-65 and MS-66 grades. The issue becomes very scarce in MS-67, and in MS-68 both PCGS and NGC have each graded a single coin, making it a condition rarity in those top grades.