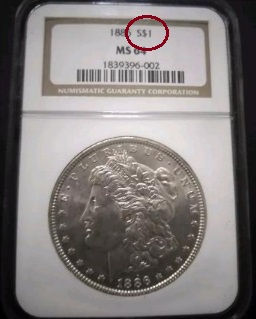 In my browsing of online auctions, I have seen the “S$1” designation, which means “Silver, $1.” This is sometimes confused in NGC labels as an “S” mintmark. In fact, the 1886 Morgan dollar above was listed on eBay as 1886-S. 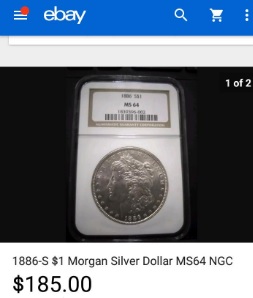 The seller also misidentified the “S” in his description. 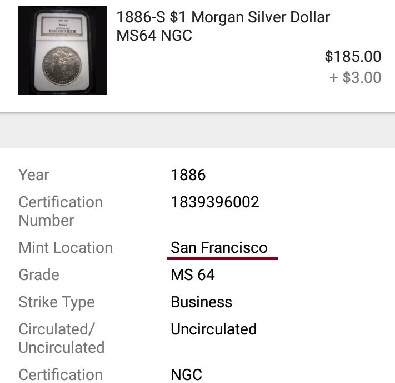 This has been a relatively rare but occasional issue with NGC labels. You can read about it in coin threads, such as this one, in which a person asks:

I have been watching few graded silver dollars, NGC and PCGS. Noticed that some slabs (PCGS mostly) say “$1,” and others say S$1 (mostly NGC). Have you noticed that? To me and many other beginners in those coins, that “S” could be confusing. What’s that S mean, silver? For a second I thought it may stand for S mint, and so did the seller in the description, almost got burned. Do we need TPG’s to tell us that the Morgans are silver? What’s the point of that annoying S?

Those answering the inquiry provided accurate answers, such as:

In the case of the Morgan dollar, the “S$1” distinguishes it from the 1878-S trade dollar whose designation is “T$1,” as in the example below. 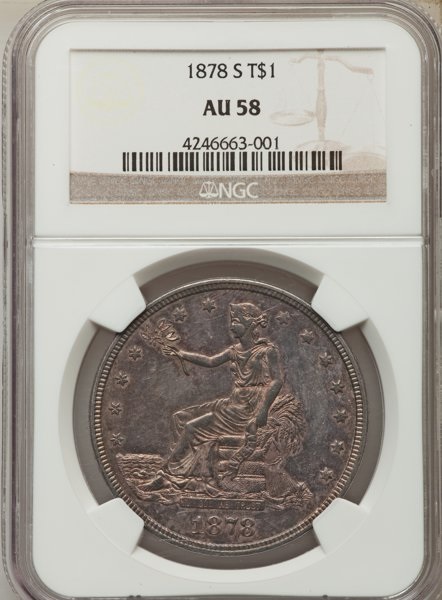 Trade circulation strikes were minted from 1873 to 1878. True, PCGS also had listed “S$1” but later removed that designation. According to Don Willis, PCGS president:

We made this change in mid–late 2005. We eliminated series and coin numbers to provide more space for pedigrees. 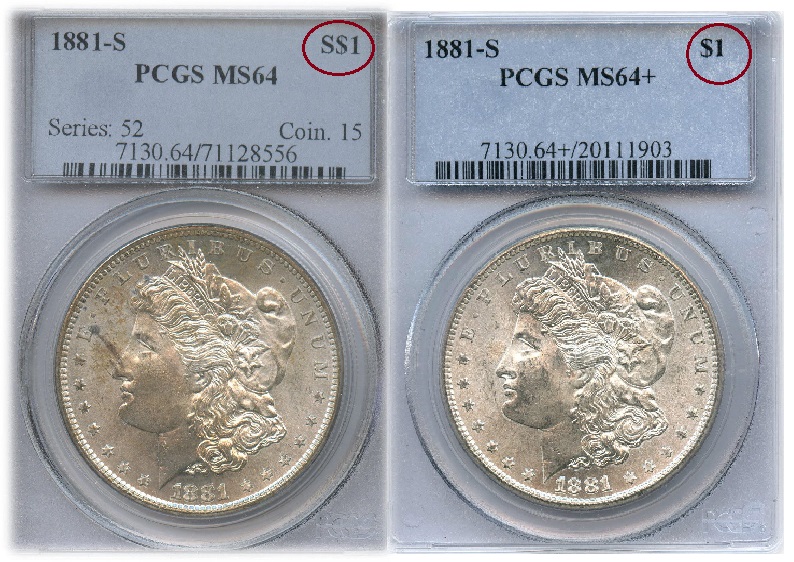 However, PCGS did not run into the same “S” confusion problem as NGC because the date is flush left on the label and the designation, flush right.

The recently revamped NGC label was praised by Coin Update for its design, especially its right field, which provides more room for stickers, variety, and other designations, and still uses the “S$1” near the date, as in this example: 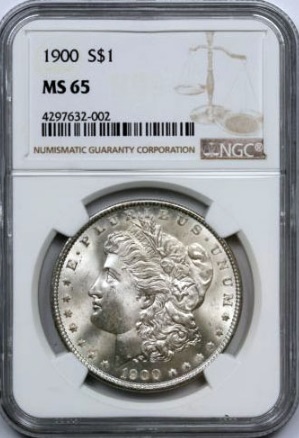 The confusion is more than just a quibble. For those who mistake the “S$1” designation as an “S” mintmark, it can mean negative reviews on eBay and reimbursement demands. If the description is cited improperly on Hibid.com or Proxibid, where all sales are final, then the buyer is left with legitimate remorse. When the eBay seller was contacted to see if he experienced any repercussions, he replied with this message:

In pulling the listing, he wasted seller funds. He also told Coin Update:

People were angry and thought I was trying to deceive them. It really was an honest mistake.

Another eBay seller who works full-time in the numismatic industry included the “S$1” designation for an 1886 NGC-labeled Morgan dollar:

When contacted by Coin Update, the seller acknowledged problems with mistaking the “S” for the San Francisco mintmark. “PCGS & NGC have used that terminology since 1986 so most coin enthusiasts are familiar with that,” he wrote. “But I am still going to change the [S$1] title just to avoid any confusion or misrepresentation.”


In my view, there is no need whatsoever to use the S$1 designation. You may disagree, but I think the “S$1” should be removed from all Morgan label designations, except, perhaps, from the 1878-S Morgan, to distinguish it from the 1878-S trade dollar.

In the end, the point of this post is to inform those unfamiliar with the terminology to be aware that the “S$1” does not stand for “San Francisco” in NGC labels.

It might be wise in the next label redesign for NGC to remove that “S$1” designation or distance it in the field from the date to avoid any confusion as illustrated above.

To be honest, in the past, I once made the same mistake in an online bid, trusting the seller who had confused the designation for the mintmark. It happened on Proxibid, so I could not return the coin.

Have you ever encountered this phenomenon with the NGC label? What are your thoughts? Share them in the comment section below.