The first-ever complete set of certified proof U.S. $3 gold coins will be publicly displayed during the American Numismatic Association’s National Money Show in Sacramento, California, March 17 – 19, 2011. The set will be at the Professional Coin Grading Service (PCGS) booth #1101.

“This unprecedented 36-coin set was assembled over the past six years by collector Tom Bender of Philadelphia, Pennsylvania and Palm Coast, Florida.  Just a few weeks ago he obtained the final coins he needed, and this will be the first time an entire set of certified proof $3 gold has ever been publicly exhibited,” said Don Willis, President of PCGS, a division of Collectors Universe, Inc.

“This is an extraordinary collection and an amazing achievement,” said Laura Sperber, President of Legend Numismatics in Lincroft, New Jersey who encouraged Bender to begin the collection in January 2005 and helped him obtain most of the coins.  “This is the first $3 proof gold set certified by PCGS in 25 years of operations.  Even compared to famous, early collections, this set would still rank as the finest known.” 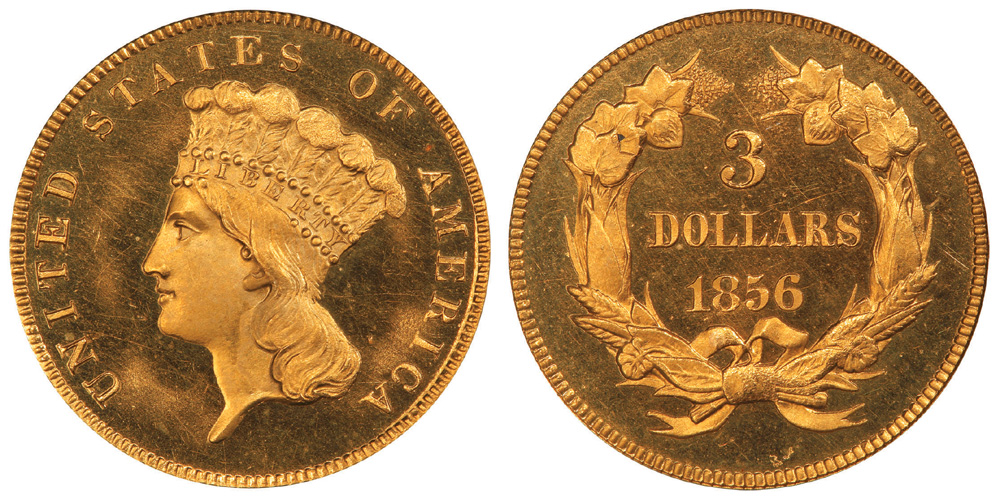 Bender’s personal favorite is the 1856, graded PCGS PR65+ Deep Cameo, formerly in the famous Garrett Collection.  It is a Population 1 with none graded higher.  Other notable coins in the set and their PCGS grades include: 1873 Open 3 PR65 Deep Cameo; 1875 PR65 Deep Cameo; and 1876 PR66 Deep Cameo.

Bender, who considers himself a coin collector, not an investor, began collecting coins as a youngster in Kentucky. He recalls riding his bicycle to a coin shop where he would purchase Indian Head cents for 20 cents each.

“The proof $3 gold is an undervalued series.  This is in part due to the extreme rarity of the coins.  Many collectors are not attracted to a series where the coins are so difficult to find.  For example, many of the dates only have populations of nine or ten.  The 1855 and 1856 have a mintage of five each,” said Bender.

The PCGS Set Registry has more than 54,000 registered sets of U.S. and world coins.  For additional information, visit online at www.PCGS.com/setregistry or call PCGS Customer Service at (800) 447-8848.