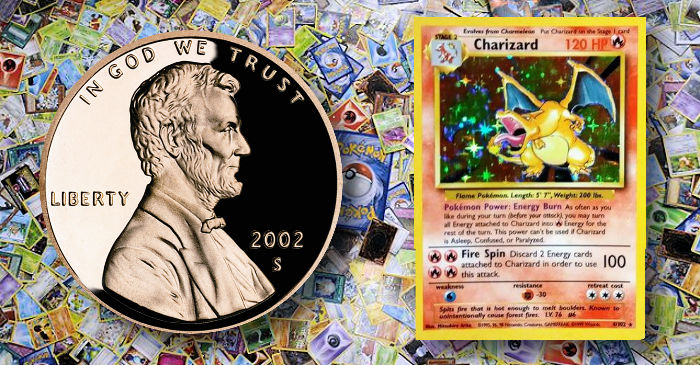 A comparison between a Proof 2002 Lincoln cent with a holographic Charizard Pokémon card. Holographic Pokémon cards can sometimes be considered the card collecting equivalents of Proof coins in numismatics. Background image by Jarek Tuszyński.

After hearing time and time again that my old Pokémon cards from the ’90s might be worth some money these days, I decided to go through my collection. Despite holding several first-edition cards, I was immediately presented with a problem that is wholly absent from the hobby of coin collecting. There is no central tome to consult for determining the worth of my Pokémon cards. In other words, there is no Red Book of Pokémon card collecting. While there are professional card-grading services comparable to the ones in the hobby of coin collecting, Pokémon card collecting is still in its Wild West phase in terms of building up a sizeable base of educated individuals in the matter. Nevertheless, let’s continue! 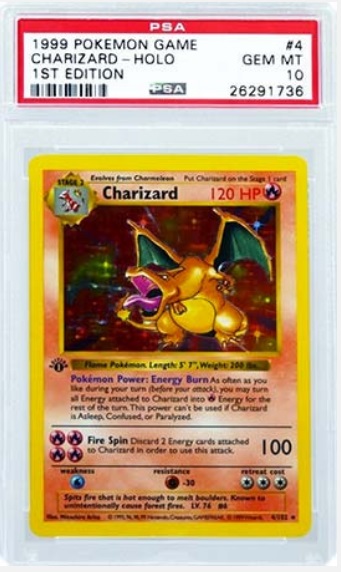 What separates worthless Pokémon cards from the cards that make it rain like Meowth’s Pay Day attack? Six particular attributes come to mind: Condition, holographic foil, first-edition mark, a shadowless image, collector number, and errors. The first attribute, condition, has grading standards not unlike the grading standards applied to coins, and an excellent article on Heritage Auctions goes into detail on these standards. The primary professional service that grades Pokémon cards is the Professional Sports Authenticator (PSA), which specializes in grading sports trading cards but also grades Pokémon cards as well, with grades ranging from 1 (worst) to 10 (best). In coin collecting, by contrast, grades range from 0 to 70 and are determined by professional services like the Numismatic Guaranty Corporation of America (NGC) and the Professional Coin Grading Service (PCGS). 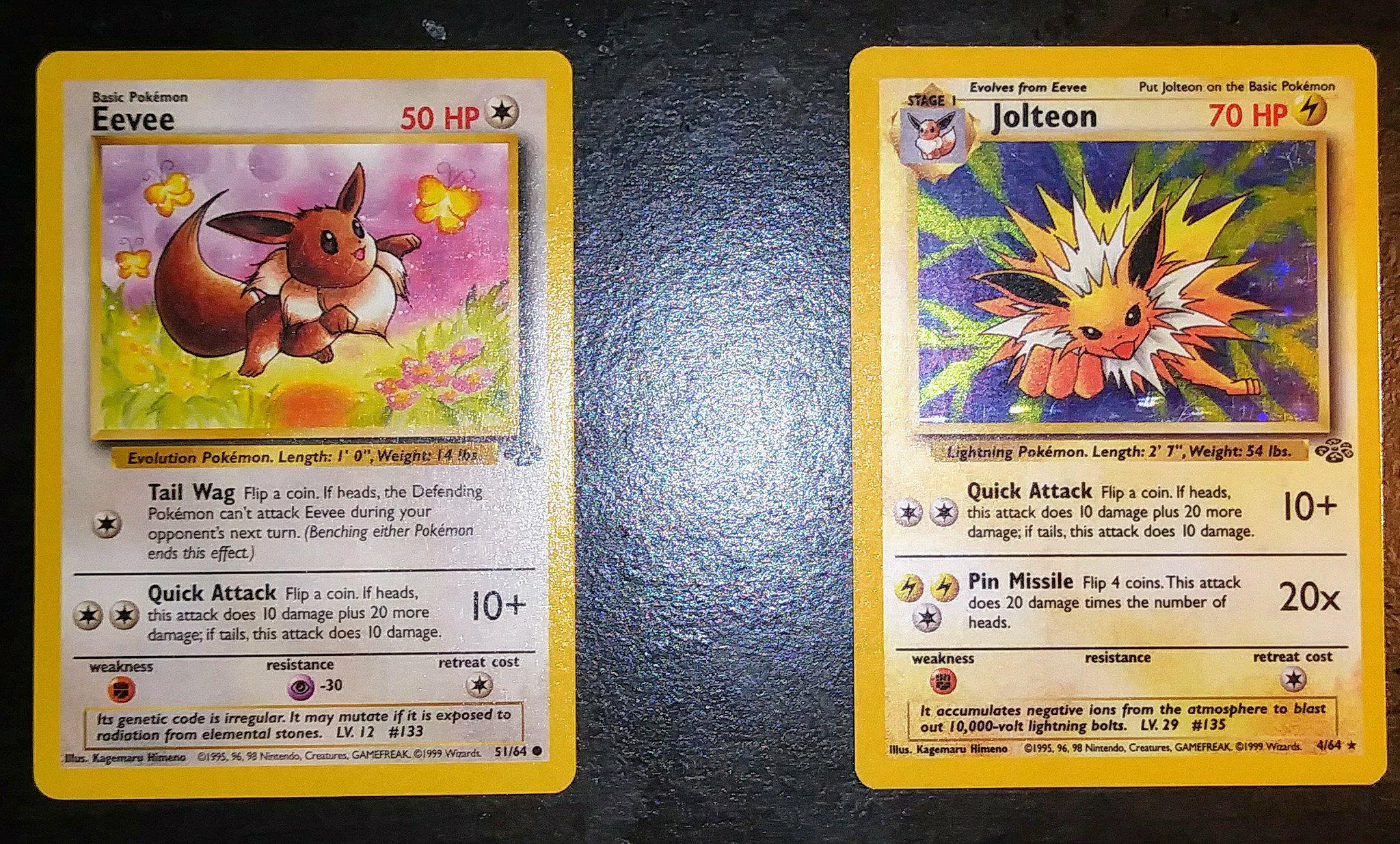 The next attribute is whether or not a Pokémon card is holographic. Simply put, holographic cards tend to hold more value, and they are extremely easy to distinguish from non-holographic cards given their shiny and attractive appearance. This quality would be the equivalent of what separates a Proof coin from an Uncirculated coin, given the shiny, mirror-like appearance of Proof coins. 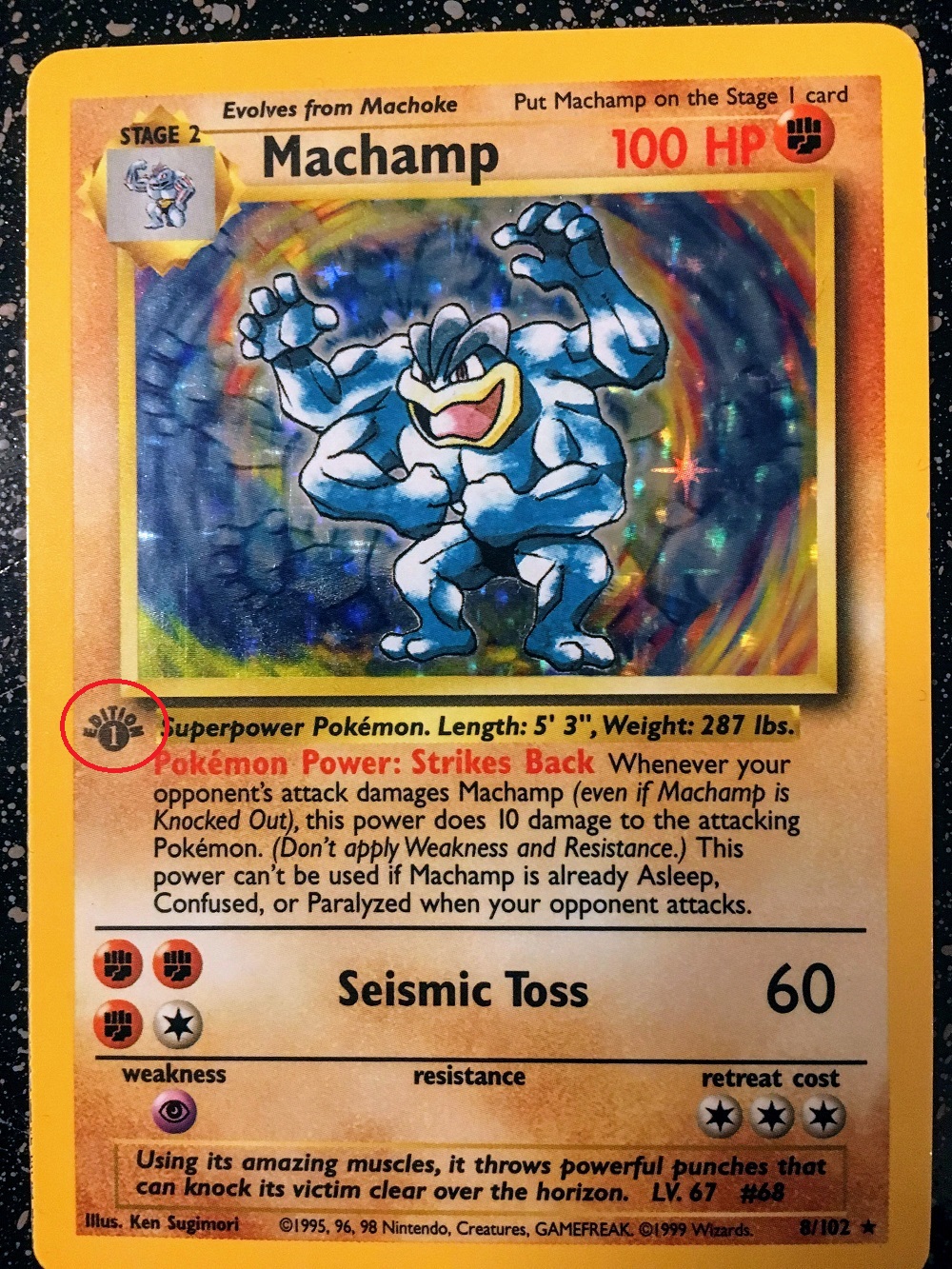 My Machamp card with its first-edition mark circled in red.

Perhaps the most important attribute out of them all is whether or not a card has the first-edition mark, which can be seen toward the bottom-left of the Pokémon’s picture. 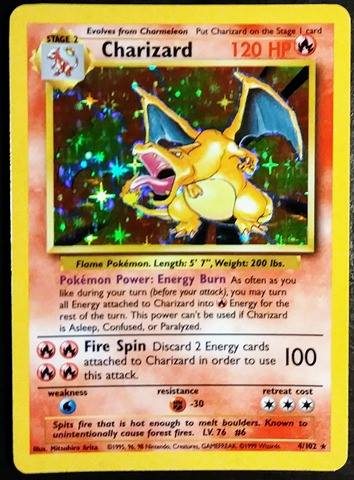 My Charizard, while stunningly holographic, does not possess the first-edition mark to make it truly valuable (around $3,000). 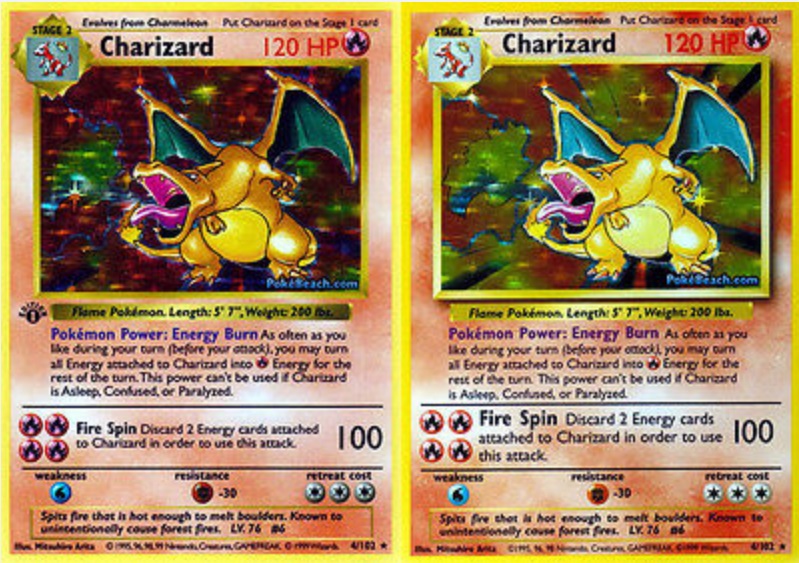 Next comes the shadow, or rather, whether or not the Pokémon card picture possesses one. Shadowless cards are worth more than ones with a shadow on the outer right-hand side of the yellow border surrounding the Pokémon’s central image. See the example with the two Charizards above. A shadowless Pokémon card would be comparable to a coin with remarkable toning qualities. 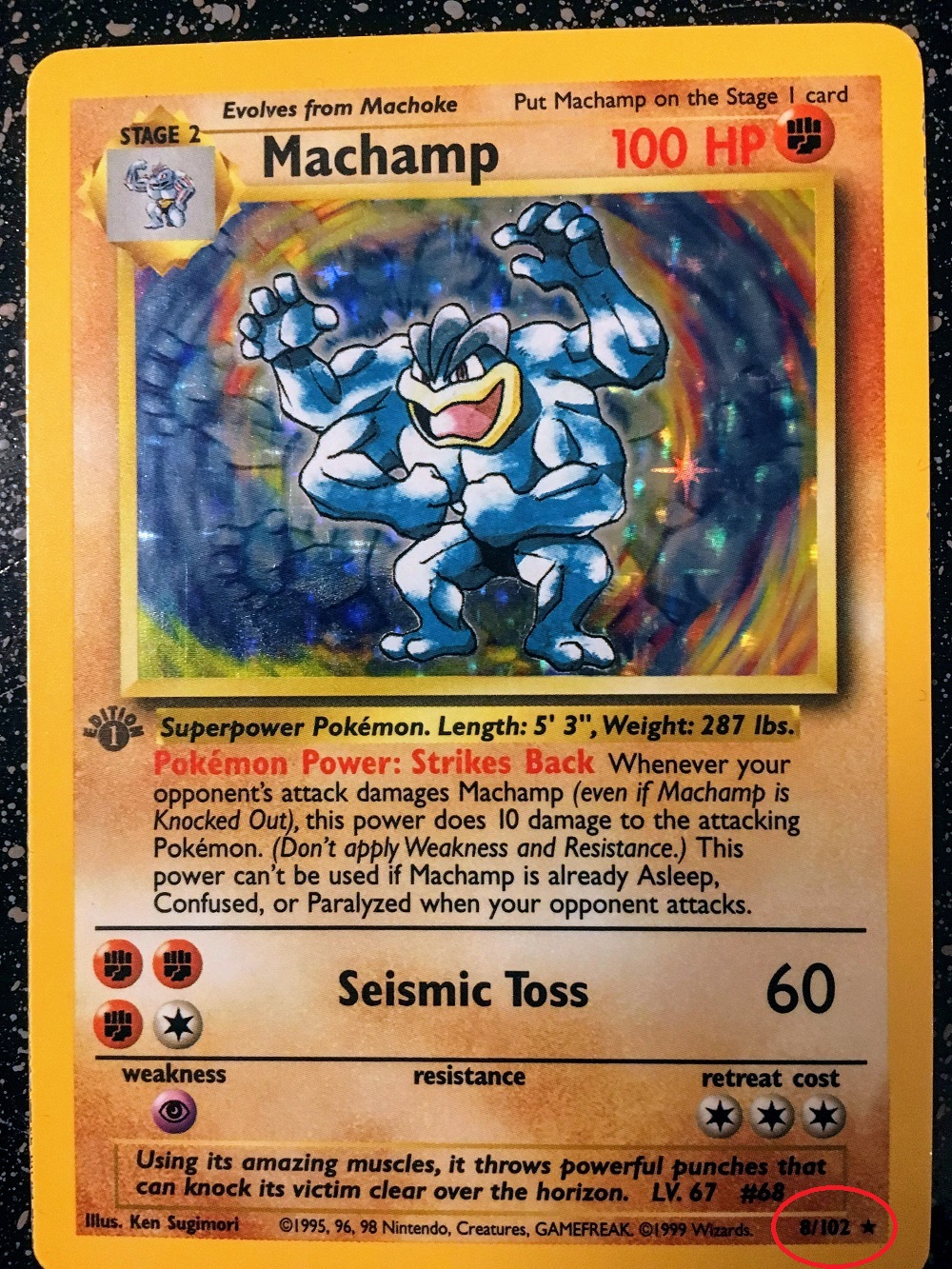 My Machamp card with collector number circled in red.

The collector number can be rather tricky and needs to be looked up for each individual Pokémon if you already suspect it is a valuable card. For example, if you possess a first-edition Machamp, the number to look for in the lower-right hand corner is 8/102. The collector number is probably second in importance to the first-edition mark in determining a card’s worth, so take note! This attribute is most closely associated with a coin’s series in numismatics. 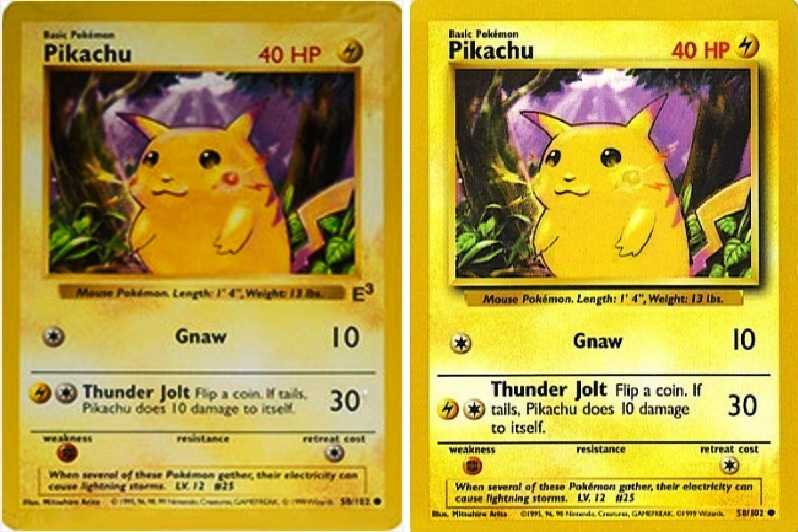 Rare error Pikachu with misprinted red cheeks (left) and regular Pikachu with cheeks turning yellow from generating an electrical current (right). The error card fetches up to $250 on eBay while the regular version would get you nothing. Image courtesy of Heritage Auctions.

Finally, we come to the error cards, which are pretty self-explanatory. In the example above, Pikachu’s cheeks are misprinted red rather than the yellow that they normally appear on the same card. Errors in Pokémon cards are directly equivalent to errors in coin collecting and do not require much explanation, just a general knowledge of the most common errors to look for. 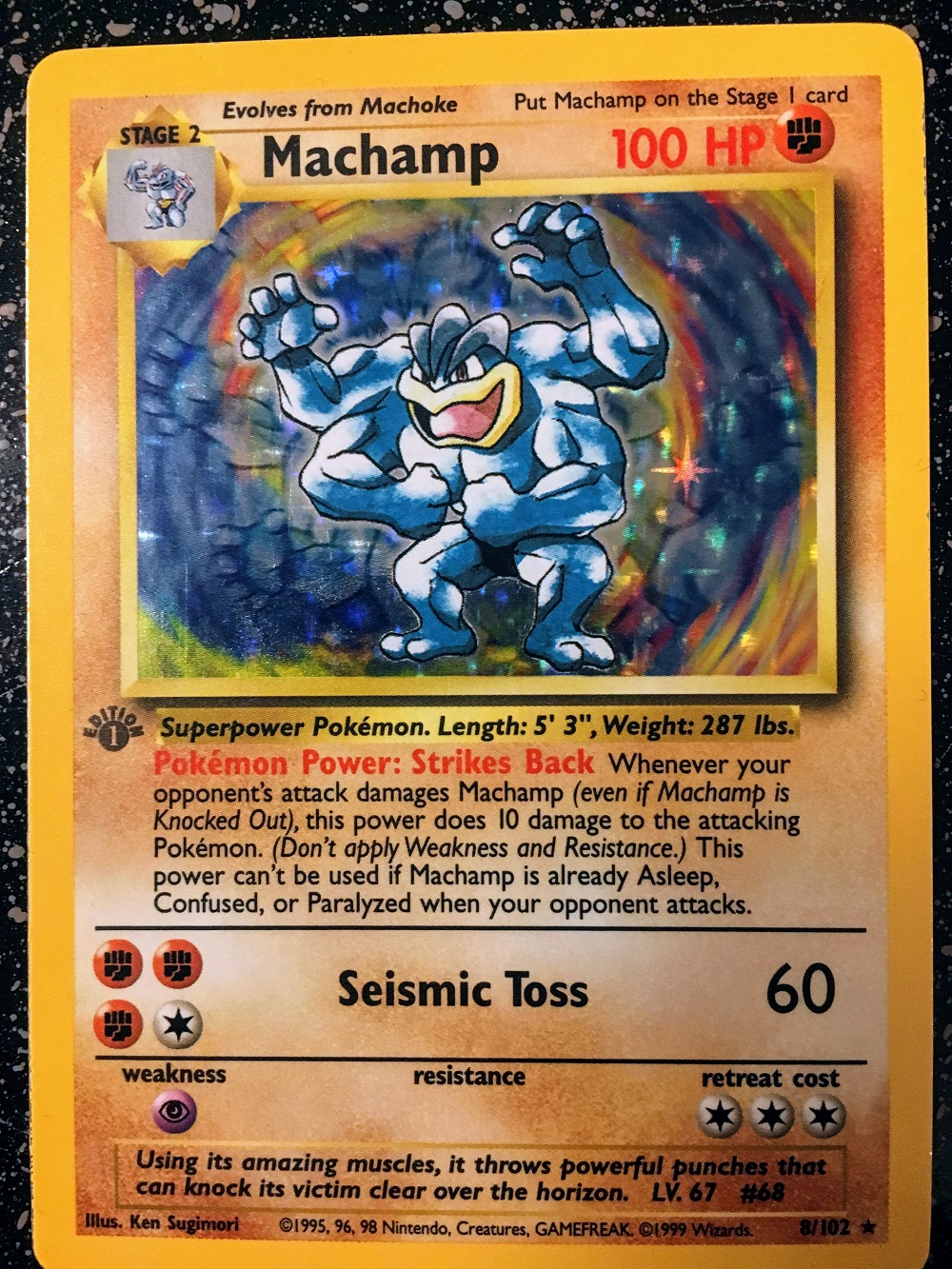 Now let’s get to my two cards of possible noteworthy value, starting with Machamp. What initially looks like some sort of steroidal abomination turns out to be one of the most highly sought after collector cards in Pokémon. According to an article by Jonathan Sawyer, who compiled research from sources like the International Business Times and various eBay listings, my first-edition Machamp with collector number 8/102 should be worth around $1,000 if it achieves a PSA grade of 9! “What a steal!” I thought. To my chagrin, however, I found that my supposedly $1,000 first-edition Machamp was selling for sometimes as low as $3.74 on eBay! What was going on here? Why are people selling such a valuable card for so little on eBay? 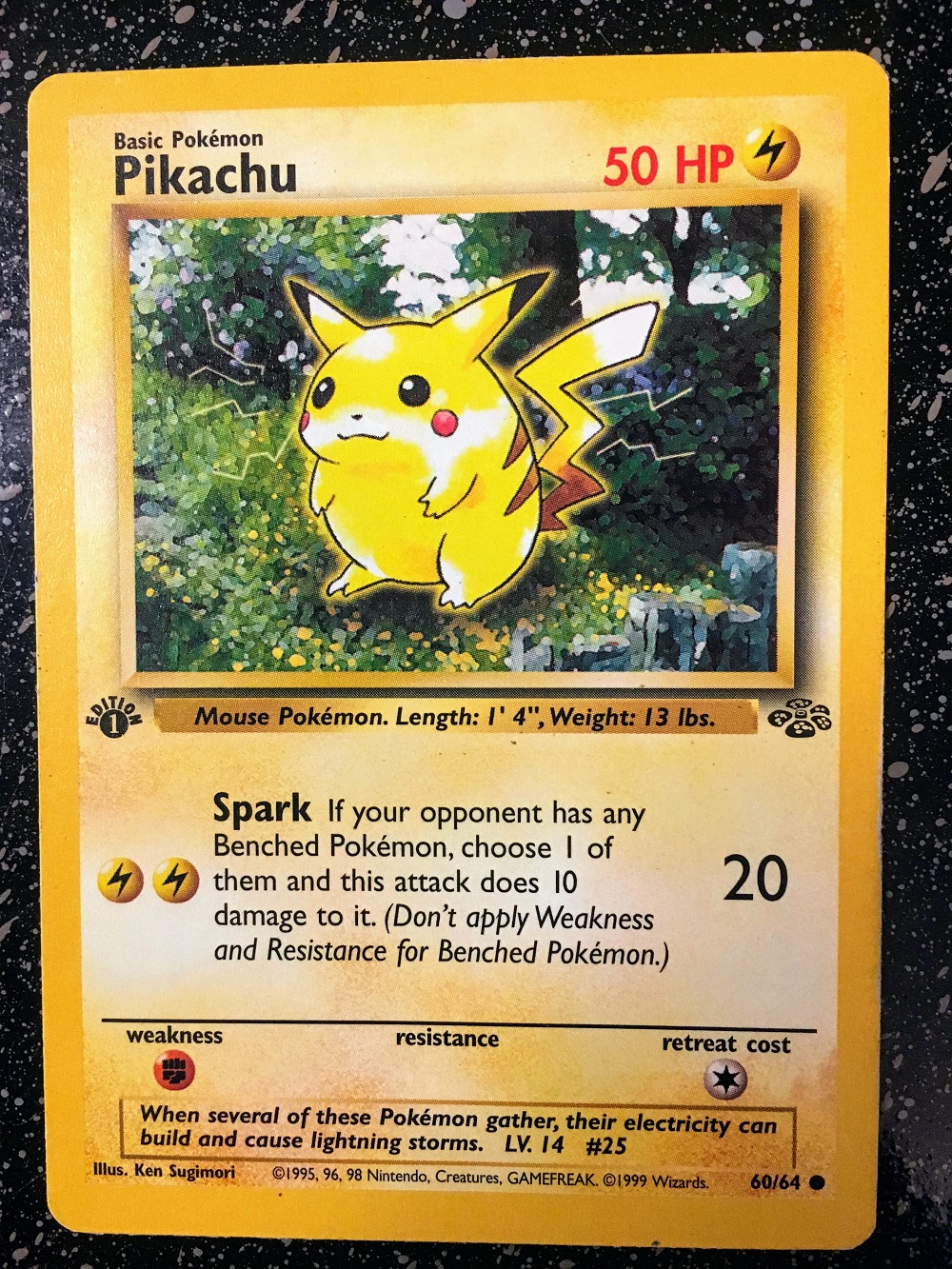 Let’s try my Pikachu. First-edition, check. Collector number 60/64, check. Again, it turns out to be a winner for around $500 if it were to achieve a PSA grade of 9. My cards both still look like they just came out of their original pack, so I feel like that’s achievable. I went to eBay once more and was horrified by listings showing first-edition Pikachus selling for a whopping three dollars. It then occurred to me what the problem was — there is no central, widely read tome like the Red Book for Pokémon card collecting to help educate the populace just how much their Pokémon cards are worth. This also means that buyers are generally not aware of how much these cards are truly worth either, and so they are often making out like bandits without even knowing it. Pokemon card sellers are drastically under-selling their cards while buyers are acquiring them for much less than their true value. Therefore, the sellers who do know how much their cards are worth will have a hard time selling because too many other sellers are under-selling. The Pokémon card-collecting community is in chaos and needs some sort of text not unlike the coin-collecting hobby’s Red Book to get things back on track.


In short, I’m deciding to wait a little longer before submitting my cards for PSA grading. While a Pokémon card collector might get lucky once or twice selling their old Pokémon cards, they are probably more likely to get burnt in a deal with the current state of things. Even though the PSA is a good starting point to grade your cards, once you put them out on the market, it’s quite probable that you will not get the price you were hoping to sell your cards for. Pokémon card collecting might be the hobby of my generation, but at the moment it is not the best way to make excellent finds and deals. What I took away from this lesson is that Pokémon card collecting is still in its infancy, but more importantly, it can be a useful educational tool to get millennials into more established hobbies like coin collecting. Try talking to your kids about their Pokémon cards if you are a coin collector because it might be the best way to pass on your passion for numismatics!