Trustees of the Ronald Reagan Presidential Library have authorized the commission of a commemorative medal which celebrates the 100th anniversary of the birth of the 40th president of the United States from 1981 to 1989. Ronald Reagan was born of the 6th February 1911 and died on the 4th June 2004 at the age of 93. 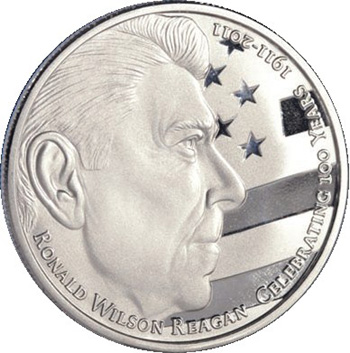 Designed by graphic artist Nick Seay of the Washington-based firm Beveridge Seay Inc, Nick was chosen due to his previous association with the Reagan administration as he had once designed Christmas cards, announcements, invitations and decorations. A total of 14,000 medals were authorised and distributed to High schools, colleges and professional football teams across the country who have been invited to use the coins this weekend (September 23 – 25) for the pre-game toss, and thousands have accepted. Football legends Lou Holtz, Doug Flutie, and Lynn Swann are all actively involved in the effort, whose intent is to raise awareness about Reagan, his presidency, and his love of the game.

The obverse design shows a profile of President Reagan facing to the right with a backdrop of an American flag, showing the lower portion of the stars and stripes adjacent to the field. The text under the portrait reads “RONALD WILSON REAGAN CELEBRATING 100 YEARS 1911 – 2011”. The reverse of the medal depicts the official insignia of the centennial celebrations. Struck by the Osborne Mint in Ohio, they are produced in nickel to proof quality with a diameter of 38 mm. The remaining quantity of the medals not distributed to schools and colleges will be sold through the Reagan Presidential Library.

For more information on this commemorative medal, please visit the website of the Reagan Presidential Library at: http://www.reagancentennial.com/#/Coin 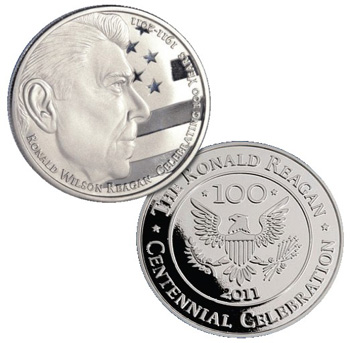