The Bank of Korea have announced that they will release a set of two commemorative coins to celebrate the upcoming visit of Pope Francis.

His Holiness the pope is scheduled to visit the Republic of Korea from the 14th to the 18th August during which he will conduct four Masses, including one for the beatification of 124 Korean Catholic martyrs and another for a gathering of Catholic youths in Asia. His Holiness is also expected to console families of those who died in the mid-April Sewol ferry disaster in which 293 passengers lost their lives, many of them young people. It is his first visit to Asia since his Papal inauguration last year. The Bank of Korea said it will issue a total of 90,000 silver and brass coins to “spread the message of reconciliation and peace, the key purpose of the Pope’s visit.” 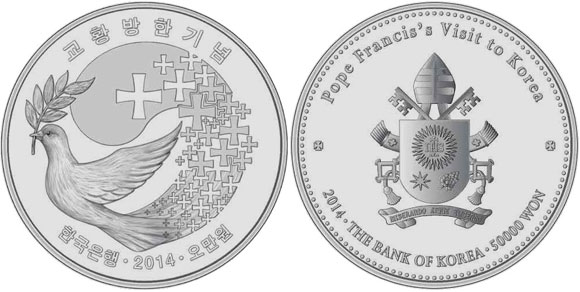 The two coin designs have incorporated both Catholic symbols of peace and Korea’s traditional symbols. The design of the silver coin (50,000 Won) will include the “taegeuk” symbol, a hallmark of South Korea’s national flag, with crosses and a dove bearing an olive branch on the obverse. The reverse will include the commemorative text “POPE FRANCIS’VISIT TO KOREA” above the center of the design that includes the papal coat of arms. Below the crest is the text “2014 BANK OF KOREA 50000 WON”. 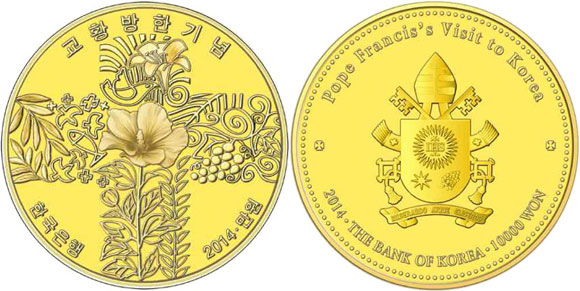 The brass coin’s design (10,000 Won) includes the shape of a cross adorned with symbols like lilies, olive branches, a stylized dove and the rose of Sharon, the country’s national flower. The reverse design is the same as the silver issue.

A total of 81,000 coins will be available for sale in Korea via reservations at Woori and Nonghyup commercial banks from the 11th August when the coins are officially issued. The remaining number of 9,000 coins – 4,500 pieces each for the brass and silver coins will be sold to overseas collectors, according to the central bank.

For more information on these and other coins issued by the Bank of Korea, please visit their website at: http://www.bok.or.kr/broadcast.action?menuNaviId=1634 Information available in both Korean and English. Interested collectors may inquire by e-mail at: