The United States Mint is scheduled to conclude sales of 2012 commemorative coins on December 17, 2012 at 5:00 PM ET. Under the authorizing legislation for each program, the coins are only permitted to be issued during the 2012 calendar year. To allow sufficient time for ordering processing and fulfillment, the US Mint has typically ended sales for commemorative programs at a pre-announced date prior to the end of the year.

The 2012 Infantry Soldier Silver Dollar is issued to commemorate the legacy of the U.S. Army Infantry and the establishment of the National Infantry Museum and Soldier Center in Columbus, Georgia. The obverse design of the coin features a modern infantry soldier on rocky ground, charging forward and beckoning the troops to follow. The reverse features the crossed rifles insignia, the branch insignia of the Infantry.

The maximum authorized mintage for the issue is 350,000 coins across proof and uncirculated versions. The US Mint offers individual proof or uncirculated coins, as well as a Defenders of Freedom Set with a product limit of 50,000 units.

The maximum authorized mintages for the program are 100,000 gold coins and 500,000 silver dollars. Product options include individual proof or uncirculated versions of each coin, a two coin proof set, and a special silver dollar set with a product limit of 50,000 units. 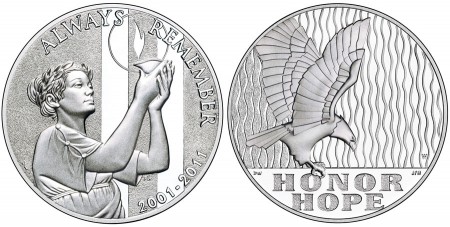 The United States Mint is also scheduled to conclude sales of the 2011 September 11 National Medals on December 17, 2012 at 5:00 PM ET. Available from either the West Point or Philadelphia Mint, these one ounce silver medals first went on sale June 20, 2011. The maximum mintage for the issue is 2 million units.

To place orders or for additional information, visit the US Mint’s website at http://usmint.gov/