Based on the last available sales figures, the United States Mint’s 2011 commemorative coin programs generated around $5.5 million in surcharges for the designated recipient organizations.

Commemorative coin programs are authorized by acts of Congress to celebrate and honor American peoples, places, events, or institutions. The authorizing legislation dictates the specific denominations to be issued, maximum mintage levels, design requirements, and period of issue. Legislation also typically requires that certain surcharges be added to the cost of each coin for later distribution to a recipient organization or project.

The United States Army Commemorative Coin Program included $5 gold coins, silver dollars, and clad composition half dollars. The surcharges included within the sales price s for the coins were $35 per gold coin, $10 per silver coin, and $5 per half dollar. Based on sales figures, the program generated estimated total surcharges of $3,055,735.00. The funds are directed to be paid to the Army Historical Foundation to help finance the National Museum of the United States Army. 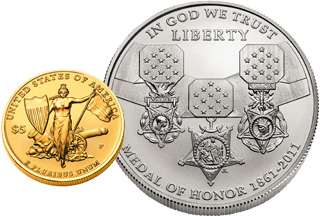 The Medal of Honor Commemorative Coin program included $5 gold coins and silver dollars. The surcharges included within the sales prices of the coins were $35 per gold coin and $10 per silver dollar. Based on the sales figures, the program generated estimated total surcharges of $2,495,395. The funds are directed to be paid to the Congressional Medal of Honor Foundation to help finance the educational, scholarship and outreach programs.

Under the requirements of United States Code Title 31, Section 5134(f), the surcharges may only be distributed provided that all numismatic program costs have been recovered. Additionally, the recipient organization must demonstrate that they have raised funds from private sources in an amount equal to or greater than the funds generated from commemorative coin surcharges. If the matching funds are not raised within two years of the conclusion of commemorative coin sales, then the surcharges are deposited in the Treasury as miscellaneous receipts.