The Treasury of the Government of Alderney have issued a commemorative coin to mark the engagement of H.R.H. Prince William of Wales and Miss Katherine Middleton, who announced on the 16th November their intention to marry in 2011. The pair met in 2001 while they were both university students at St. Andrew’s in Fife, Scotland. Prince William is the eldest son of H.R.H. Charles, Prince of Wales and the late Princess Diana. 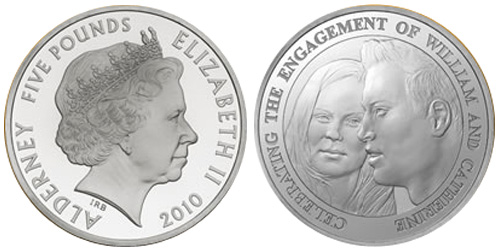 The obverse of the coin carries the present circulation type portrait of H.M. Queen Elizabeth II sculpted by Ian Rank-Broadley along with the coin’s denomination and issuing authority of ALDERNEY. The reverse depicts the Royal couple with a profile of Prince William facing left, positioned to the right of his fiancée, and Miss Katherine Middleton in full frontal face, positioned to the left of William’s profile.

The coin is struck in cupro-nickel, proof sterling silver with a weight of 28.2 grams and proof .916 gold weighing 39.94 grams. All coins have a diameter of 38.6 mm. A special sterling silver edition plated with 24 carat gold has also been issued.

The reverse design is the work of Sculptor Matthew Buonocorsi of the Royal Mint.

For more information on this and other coins of offer from the Government of Alderney, please visit the website of the Royal Mint at: http://www.royalmint.com/