The Monnaie de Paris have launched a latest coin which pays tribute to familiar and internationally known comic book characters. On the success of the 2010 issue featuring “XIII” and last year’s coin set featuring the “Blake and Mortimer” characters, this year’s subject is the one and only superhero Largo Winch.

Published in many countries around the world, the saga of the young and handsome orphan who is propelled to the head of a business empire, Group W, after his adoptive father Nerio is murdered, is translated into more than 10 languages from its original French dialogue with over 500,000 copies sold annually. The character is the work of Belgian authors Philippe Francq and Jean Van Hamme and was originally published in 1978. The comic book character has also been the subject of a television series, two movies released in 2008 and 2011 and even a video game. 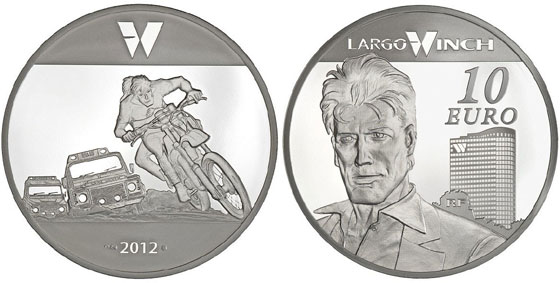 The two coins, one gold and one silver, depict the same design with an action scene right out of the comic book itself. The obverse shows our superhero on his motorcycle being chased by FBI – the scene is borrowed from the story “Black Sea” where Largo is involved in a case against arms trafficking and international terrorism. A portion of the logo appears above the primary design and the year “2012” appears below along with the MdP’s mintmarks. The reverse shows Largo as he appears in his role as a businessman. In the background is the skyscraper of the W Group, the largest conglomerate of multinational corporations. Above the primary design is the logo in its entirety along with the coin’s face value of either 50 €URO for the gold coin – 10 €URO for the silver coin just to the right of the image of Largo. 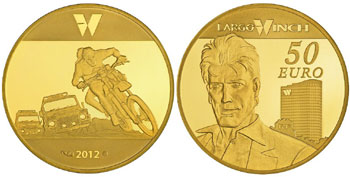 For more information on this series and others offered by the Monnaie de Paris, please visit their website at: http://www.monnaiedeparis.fr/Jeunesse/Largo-Winch-pcDa5dvKztz4AAAAEuSs8BfOwnsyWsE6zmvJ8AAAE6reoKsEV5.html?JumpTo=OfferList&JumpFrom=SearchResult&PageableID=rLKsE6zmto8AAAE61e8K3HgN&PageNumber=2  A small quantity of the 2010 and 2011 silver €10 coins are still available – international orders fulfilled, information if offered in French.