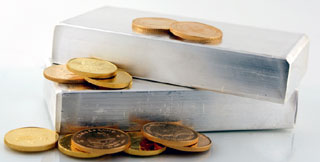 As I have previously discussed, the COMEX silver inventories in bonded warehouses at the close on June 16 totaled 119.5 million ounces. They have generally declined ever since. Instead of the declines being spread somewhat evenly among all the depositories, the withdrawals have focused on just two companies: HSBC and Scotia Mocatta. It happens that these are the two depositories that are strongly suspected of having insufficient physical inventories to cover their contractual obligations.

As of the COMEX close on August 17, total COMEX silver inventories were down to 109.93 million ounces, a decline of 9.57 million ounces (8.0%) over the past two months. On just August 17th, over 566,000 ounces were withdrawn, entirely from inventories held at HSBC.

Over the past two months, there have been several instances where silver has been added to COMEX inventories. These temporary increases looked suspiciously like desperate moves to cover immediate withdrawal requirements. I don’t know how long silver can be scrounged from alternate sources and moved into COMEX warehouses. If you still own COMEX silver contracts, you need to realize that they may not represent a silver investment at all. COMEX silver contracts can be settled by cash payment or by shares of stock in the SLV silver exchange traded fund (which also is suspected of owning too little physical silver to cover its contractual obligations).

Rebound in gold and silver prices. After precious metals dropped significantly in late July, prices have risen almost every day since. As I write this, gold has topped the $1,215 level and silver $18.50, which were both levels at which short sellers dumped on the market in late July. I suspect that the extreme price suppression tactics used at those thresholds have been finally overcome by continuing strong demand for physical gold and silver. As has been the pattern for much of the past decade, the US government and its trading partners are now probably planning to defend precious metals from breaching much higher levels. In gold, I don’t expect strong manipulation efforts until it nears $1,265. In silver, I don’t foresee much suppression tactics below $19.00 or maybe even $20.00. Don’t be surprised to see these higher levels in the next few weeks.