The very first commemorative coin struck in the United States was the Columbian Half Dollar, struck in both 1892 and 1893. While the 1848 Quarter Eagle struck at the Philadelphia Mint from gold out of California is often mentioned as the first commemorative, it does not necessarily fit into the grand scheme of commemoratives. These can best be defined as issued for commemorations (hence the name) and sold at a surcharge to the general public, not necessarily meant for circulation although valid at their face value.

Quite fittingly, the first commemorative struck with these characteristics commemorates the foundation of America as we know it: the (accidental) discovery of the Americas by Christopher Columbus (In this article I will use the traditional English spelling we have grown accustomed to. In Italian his name is Cristoforo Colombo and in Spanish his name is Cristóbal Colón.) Even though people from Europe and possibly other parts of the world had visited the continent in earlier centuries (most notably the Norse in the 11th century) that knowledge had been lost or forgotten, and it would be the discoveries of Columbus in a series of four voyages over a ten year period that sparked European interest in the American continent and would eventually lead to the settlement of both North and South-America by Europeans, largely replacing the native population. 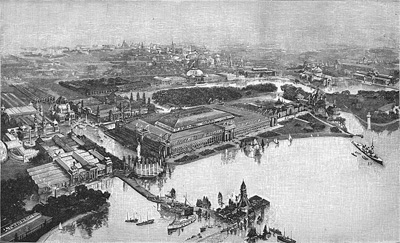 The 400th anniversary of Columbus’ first voyage was commemorated on a large scale in 1892 and on an even larger scale in 1893, with one of the highlights being the World’s Columbian Exposition in Chicago, Illinois. The commemorative coins were struck to promote and finance the exposition and were issued as the only official souvenir of the exposition, which officially opened in May of 1893 and closed at the end of October of the same year. Even though five million coins were authorized, total mintages were much lower, with 950,000 struck with the 1892 date (the logical date of commemoration) and an additional 1,550,000 struck dated 1893, the year of the exposition but a year too late to commemorate Columbus’ first voyage.

The design of the coin itself is very interesting. It was not designed by a single person but instead by both Charles Barber (who designed the obverse) and George Morgan (who designed the reverse). There are some interesting facts of the design which brings the coin to life and also makes us realize that the design on both sides is more of a fantasy than reality. First of all, there are no known portraits of Columbus that were made during his lifetime and can be confirmed as such; all we know are interpretations made at a later date, which might or might not be correct. Second of all, the exact type of ship that the Santa Maria, Columbus’ flagship on his first voyage and depicted on the reverse of the coin, is unknown and sometimes disputed. As such, the design has to be taken with a grain of salt and not considered to be completely factual. 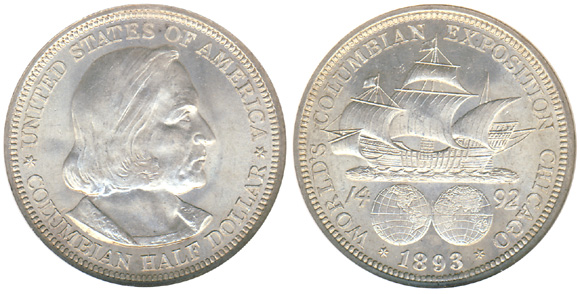 Olin Levi Warner designed plasters for both the obverse and reverse and both Barber and Morgan based their design on this. The origin of the portrait can be traced back to a portrait made by Charles Legrand, a Frenchman, in 1838 which now resides in a museum in Madrid. The true origins of this popular image of Columbus that is familiar to many go back much further. A great deal of valuable information on the subject can be found in the book “The Columbus Gallery”, which was written by Néstor Ponce de León and published in New York in 1893. Since then much research has been done on the subject and many papers have been written. The overall consensus remains that no genuine portrait of the explorer is known to exist, and if it did exist at some point, it has been lost in time. We have to remember that Columbus was not necessarily well regarded in his lifetime and he died a poor man; the importance of his discoveries would not become apparent until after subsequent discoveries by other explorers. As such, it is not very likely that an actual portrait was made during his lifetime. The best (verbal) description that we have comes to us from his (illegitimate) son, Ferdinand Columbus, who published a biography on his father. The explorer is described as a man of medium appearance, well-built with reddish/blond hair, which by the time he was thirty had turned white. Early portraits often do not match this description, indicating that they might have been more fantasy that reality.

The design of the ship on the reverse creates some confusion as well, although not as much as Columbus’ portrait does. One of three ships that accompanied Columbus on his first voyage; it was lost of the coast of present-day Haiti when it ran aground on Christmas Day, 1492. Part of the timber of the Santa Maria was used to make La Navidad, a small town on the coast of Haiti which can be considered to be the first settlement of Europeans in the new world after the settlement in Newfoundland made by the Norse many centuries before. The town lasted less than a year before it was destroyed, and only a few archeological discoveries have been made that can be traced back to the town.

The Santa Maria was built as the La Gallega in the early 1480s to be used in the Mediterranean trade. It has generally been accepted that the ship was a nao, a type of ship developed in the 15th century by Portuguese to use in maritime trade. Some sources say that the ship possibly was a Noa, developed at the same time but with a somewhat different appearance. What we do know is that it was a three-master and the slowest of the three ships, not built for long (transatlantic) voyages.  It is generally accepted that the two other ships, the Niña and Pinta were nao’s, while the Santa Maria was the Nao as depicted on the 1892 and 1893 commemoratives. Once again, however, there are only verbal descriptions of the ships, leading to some dispute as to the appearance of the three ships.

The globes on the reverse under the ship are both the old world and the new world and are often considered to be a hint to the old Mexican pillar dollars which continued circulating in the United States well into the 19th century. It can perhaps also be considered to be a hint of the Spanish history of Columbus, even though he was Italian, which is a fact that is often disregarded. His life is very interesting but somewhat mysterious and because of that the design of these first commemorative coins of the United States is all the more interesting.