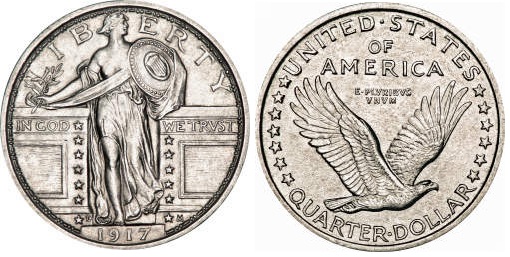 The Standing Liberty quarter, originally produced from 1916 to 1930, is in the news this year thanks to the 100th anniversary of its introduction and the release of the centennial gold version from the United States Mint. It was intended to replace the Barber design with something more beautiful, and few collectors would argue that the issues introduced in 1916 are not among the most attractive circulation coinage America has ever produced. But collectors also know that the series has a few rare key-dates (such as the 1916) that are notoriously difficult to find in well-struck, Uncirculated condition. We will take a look at some desirable yet affordable examples in this series that give the collector a lot of coin for $100 or less.

The Type I Standing Liberty quarter is one of the most infamous coins of the 20th century. Struck in 1916 and 1917, the coin utilized the original design by Hermon A. MacNeil that showed an exposed right breast. The design was altered in 1917 by covering up the breast, as well as by adding stars below the eagle on the reverse, creating two distinct types. While the 1916 issue was only struck at the Philadelphia Mint in extremely limited quantities, the 1917 issues (struck in Philadelphia, Denver, and San Francisco) are more readily available, and a nice XF of the Philadelphia product should be readily available for less than $100.

Spend a little more: Personally I believe the beauty of this design is best highlighted by an Uncirculated coin, but despite being relatively available, nice MS-63’s tend to cost $300 and up. With some searching, however, a collector should be able to find a virtually Uncirculated AU-58 with the slightest hint of rub on the high points for about $180, providing a nice alternative to a fully Uncirculated coin of this short-lived type.

The 1918-S Standing Liberty quarter is mostly known for the rare over-date of this year, the 1918/7-S. Still, the regular issue of the San Francisco Mint of this year is a scarce coin, especially in the higher grades. Despite a rather generous mintage of just over 11 million coins, most spent a considerable time in circulation, and survivors tend to grade VF at best. Perhaps, then, it is surprising to find out that with some dedicated searching a collector should be able to find a nice AU for right around $100, procuring a coin that in your author’s opinion provides excellent value for the money.

Spend a little more: This is an issue that often comes weakly struck, excluding even many Uncirculated examples from a “Full Head” designation, which is awarded by PCGS and NGC to coins that are exceptionally strongly struck, particularly when it comes to the head of Liberty on the obverse. While Gem Uncirculated examples combined with a Full Head designation are five-figure coins, the average collector might hope to purchase one of the very limited number of AU-58FH (Full Head) coins graded by the major grading services for around $300 or so…if you can find them.

The 1926-D Standing Liberty quarter is an interesting issue. Despite its relatively low mintage (1,716,000 — lower than the 1921 issue, one of the semi key-dates of the series), it is relatively available and it appears that this particular date was saved in larger quantities than some other dates in the series. Still, it has one of the lower mintages for the type, and collectors should be able to find a nice, original XF or AU for right around $100, which is great for a coin that seems like it should be scarcer when looking at just the mintage. The price of this particular date proves that when looking at the rarity of a coin you must look at the availability as well as the mintage, as those factors may tell two very different stories.

Spend a little more: This is a date that, in line with what we wrote above, is surprisingly affordable even at the Uncirculated level. As long as a coin is not designated Full Head on the holder, even MS-65’s can be purchased for less than $500, and prices fall about $100 with every 1-point drop for Uncirculated coins. Given the low mintage, I think a nice MS-64 with claims to a higher grade, or with a particularly strong strike, makes an excellent buy for your money. But you can’t really go wrong with this date, even in AU.

The 1927-S Standing Liberty quarter has the second-lowest mintage of the series with just 396,000 pieces struck for circulation; it also has the lowest mintage of the type II Standing Liberty quarters. While the coin is expensive and difficult to find in Uncirculated grades, well-circulated examples at the Fine level can be found for right about $100, making it more affordable than some of the other higher-mintage dates from the series. As always, make sure you seek a fully original, problem-free coin, and you will have added a scarce 20th century quarter to your collection.

Spend a little more: This is one of those issues that you can make as expensive as you like. For a collector on a budget, however, even a problem-free VF/XF might be a stretch, as those sell for over $500 whenever they come up for sale. A nice, certified VF-20 with claims to a higher grade might be a good option, as those can be found for right around $200 or so. No matter what grade you seek, don’t expect to find a fully struck “Full Head” example, as those are major rarities. The last PCGS MS-66FH sold for $258,500 back in 2014, about a 15x premium over a MS-66 without the Full Head designation.

The Standing Liberty quarter series was a short series, and it came to an end abruptly in 1930. No quarters were struck for circulation in 1931, and in 1932 the Washington quarter was introduced, initially to commemorate the 200th anniversary of George Washington’s birth. The final year of issue for the iconic Standing Liberty quarter series (except for the 2016 100th anniversary gold issue, of course) is the 1930 and 1930-S issues. Both can be found with relative ease, with the San Francisco issue being a bit scarcer than its Philadelphia counterpart. A nice certified AU-55 or AU-58 can be acquired for right around $100.

Spend a little more: The Philadelphia issue is another nice candidate for an Uncirculated type coin. At present latest sales show PCGS- and NGC-certified MS-63’s for just over $160 on average, providing good value if you are able to find a lustrous, lightly marked example with a good strike.