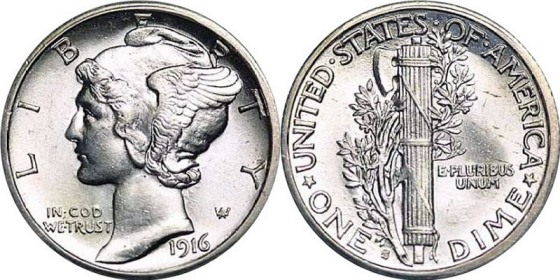 With the 2016 Mercury Dime Centennial Gold Coin having been much in the news lately, it’s a good time to look back at some of the original circulation issues. This installment in our series on affordable classic coins features Mercury dimes that can be purchased for less than $100.

Mercury dimes were minted from 1916 to 1945 and the set can be completed in circulated grades with relative ease. Just three dates are considered to be scarce, especially in Uncirculated condition: 1916-D, 1921, and 1921-D. Still, we will discover that there are other difficult-to-come-by coins in this iconic series, some of which could indeed be purchased with a $100 bill.

The first coin we will discuss came from the San Francisco Mint in the first year of issue. Introduced to replace the unpopular Barber Dime, the first Mercury dimes were produced at the Philadelphia, Denver, and San Francisco Mints. The Denver Mint issue is considered the key-date of the series, while the Philadelphia coin can be found without much difficulty in most grades, including Gem Uncirculated. The San Francisco issue falls somewhere in the middle and is a nice coin to purchase if you are looking for a first-year example.

The San Francisco mint produced just over 10 million Mercury dimes in 1916, compared to just 264,000 in Denver and over 22 million in Philadelphia. A nice MS-64 “S” example with original surfaces will set you back right around $100, and often will come with excellent eye-appeal and a lot of coin for your money.

Spend a Little More: On Mercury dimes the major grading services judge the sharpness of the strike by whether or not the horizontal bands on the fasces (the central part of the design) are complete. A coin designated as having “Full Bands” can often sell for a huge premium, especially if that particular issue rarely comes with Full Bands. In the case of the 1916-S, coins with full bands are scarce but not impossible to find, although one would expect to pay about 2.5 times as much for a MS-64FB over a MS-64 without the Full Bands designation. In my opinion a better option would be an originally toned MS-65, which gives you a very appealing Gem for about $175.

Even though the 1921-D had the second-lowest mintage in the series at 1,230,000 coins, this issue will still be in reach for many collectors, excluding high grades. Nice Uncirculated pieces will set you back at least $2,000, but it’s not impossible to find an original Good or Very Good example for less than $100. Often they will come with problems, such as cleaning or damage, but if you are insistent you will actually be able to add one of the scarcest dates in the series to your collection in a very collectible grade.

Spend a Little More: If you have been reading our series you know that for the scarcer coins it is very easy to spend a lot more than $100 on any of the dates we cover. This is also the case with the 1921-D, which slowly goes up in price from less than $100 in well-circulated grades to well over $10,000 for a MS-66FB example graded by PCGS.

While you can certainly spend as much as you want on this date, a collector could also look at adding the 1921 to his or her collection, which had a mintage of just over 1.2 million coins. It is actually a little more affordable in lower grades than the 1921-D, but with some searching and about $175 you should be able to add both dates to your collection in Very Good condition.

The 1930-S Mercury dime was struck in the middle of the Great Depression, and had the relatively low mintage of 1,843,000 coins. This makes it one of the scarcer dates in the series, even though it is still affordable. A nice AU example, with original surfaces and good eye-appeal, will cost less than $100. Compared to many coins from other series with similar mintages — which often sell for many multiples of this cost at the same grade level — the 1930-S can be considered one of the sleepers in 20th century American numismatics; if this were a Morgan Dollar it would probably cost thousands. Of course, it will never be considered a rarity, but a lightly circulated example in a PCGS or NGC holder is quite difficult to find and a true collector coin.

Spend a Little More: Perhaps unsurprisingly, Uncirculated examples of this date are a lot easier to find than an original, lightly circulated version. A collector should be able to purchase an Uncirculated dime from this year for about $150.

On paper the 1945 Mercury dime looks like a very common coin, with a massive 159,130,000 pieces (yes, that’s 159 million) struck for circulation, yet it is worthy of discussion. Remember how we mentioned Full Bands above? It turns out quality control was lacking at the Philadelphia Mint in 1945, particularly in the dime department, and 1945 “P” Mercury dimes with Full Bands are considered one of the true key-dates of the series in any grade.

Most coins are so weakly struck that they don’t even have a sign of the bands; coins with partial bands are also scarce, often selling for a premium. This makes it an interesting coin to look out for, as it is difficult to find a decently struck example in any grade. A nice MS-67 without the full band designation will cost you less than $75, and if you manage to find one that is reasonably sharp at that price you will have found yourself quite a good deal.

Spend a Little More: The sky is the limit for this one. That $75 MS-67 suggested above is really the best most collectors will be able to get. PCGS has only graded three 1945 Mercury dimes MS-67FB, and the last public sale of one was back in 2001, when an example realized $43,125. Even a marked, ugly MS-63FB will cost upwards of $5,000, as collectors chase any coin in an FB holder. With somewhat sharply struck examples being scarce, the key is finding a detailed example that just misses the Full Band designation, and even that will probably have a premium price attached to it.

If you are looking for just a single coin of this type, there are plenty of high grade examples to choose from, particularly from the later dates, some of which were saved in roll quantities and can easily be found in Uncirculated condition. As always, it is important to purchase the best you can afford, which in the case of the Mercury dime and a $100 budget will likely be a graded MS-66FB example. Coins from the San Francisco Mint from the 1940s are always good candidates, as they tend to be lustrous, sharply struck, and very appealing. A 1943-S at that grade level in a PCGS or NGC holder can be purchased without much difficulty for about $50. Several other dates also work for this purpose, as do many of the later dates from the Denver Mint.

Spend a Little More: We have only discussed circulation strikes, but a collector should not rule out a nice Proof example as a type coin. Struck only from 1936 to 1942, Proofs were specifically struck for collectors on polished blanks with polished dies, and will clearly stand out over circulation strikes. Mintages varied, but the 1942 Proof Mercury dime would be a good date to pursue, as 22,000 pieces were struck. A certified PR-65 can be found for about $150 and will truly highlight the design.