We are continuing our series on affordable options for classic issues with one of the most popular coin series in America. The Lincoln Wheat cent series was first struck in 1909, and continued to be struck until 1958. A complete set is an attainable goal for many collectors, but can be daunting, as 144 different date/mintmark combinations are needed, some of which can become quite pricey. In this article I will suggest five coins that a collector might reasonably expect to purchase for less than $100. As we can see, some options only cost $20 or so, but prices can go up exponentially from there. This is part of the fun of coin collecting, as you can make it as cheap or expensive as you’d like. 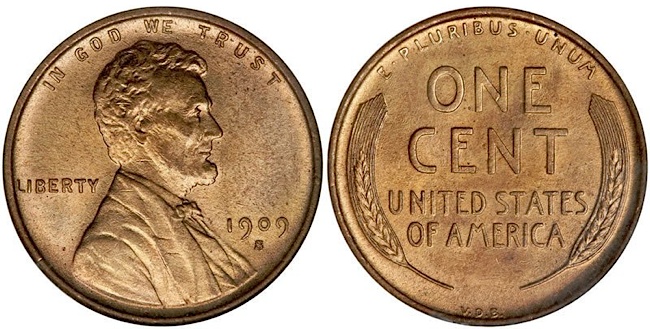 The Lincoln Wheat cent was introduced on August 2, 1909. It replaced the Indian Head cent, which was first struck in 1859. Victor David Brenner designed the new coin, featuring the bust of Abraham Lincoln. Brenner’s initials were found at the bottom of the reverse, between two prominently displayed wheat stalks. While initials of designers had been included on many previous American coin designs, they never had appeared as prominent as they would on those first Lincoln cents. Some members of the public responded that the initials were featured too prominently, and there were calls that they should be removed from the reverse. This happened shortly thereafter, resulting in two distinct varieties of the first year Lincoln cent issue.

The new cents were struck at the Philadelphia and San Francisco Mints. While the latter is a classic key-date in the series, with only 484,000 coins produced, the Philadelphia issue can be found with relative ease. Of the original Philadelphia mintage (27,995,000 coins were struck for circulation) hundreds of thousands still exist in mint state, and an uncirculated example of this iconic first year of issue coin can be purchased for as little as $10 or $20. Full red examples graded by PCGS are a little more expensive, but recent results on eBay show that a PCGS MS-64 RD can be purchased for around $60-$80.

Spend a little more: MS-66 RD graded examples are very popular in the Lincoln Wheat cent series and as such prices are often exponentially higher, especially when the population report show a low number certified (because of the popularity of the series that means less than 100 coins). In case of the 1909 VDB cent, however, I’d like to make a case for an MS-66 RD example, as demand and prices have been steady and slowly increasing in the last decade or so, making this a relatively safe investment. At present, such a coin would cost about $250. 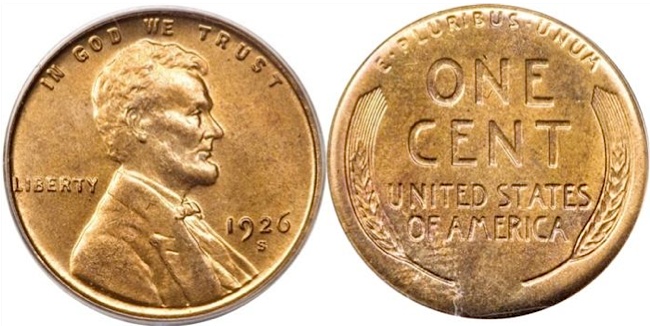 What does that mean for the collector on a budget? It means that the current value of a very lightly circulated AU-58 of under $100 provides an excellent opportunity to purchase a semi key-date with an interesting story. PCGS has graded 129 coins at this level and, while that number certainly includes numerous resubmissions, they can still be found with some searching. With an MS-64 BN selling for several multiples more, the 1926-S Lincoln Wheat cent in AU-58 is a nice coin that many collectors will be able to afford.

Spend a little more: As mentioned above, coins with original mint red remaining jump exponentially in value, with even MS-64RB selling for well over a $1,000. Collectors hoping to spend a little more would do best to find a brown graded example that still has a small amount of original mint color remaining. The difficulty of finding such coins, however, would result in quite a premium over another coin without such color in the same grade. 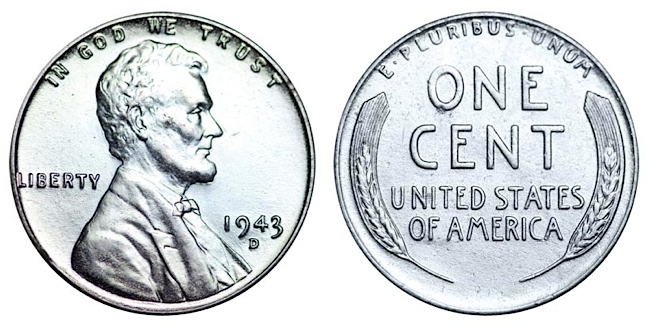 Most collectors will be familiar with the steel cent, produced in 1943 when copper was needed for the war effort. Struck at the Philadelphia, Denver, and San Francisco mints, the coins have a unique appearance, but are not rare at all, contrary to popular belief. A collector wishing to purchase a set of such steel cents in raw, Uncirculated condition can easily find such a set for less than $10. Some caution needs to be exercised, however, as many have been “reprocessed”, which means they are chemically altered to remove oxidation and rust to make the coins appear as new to the unsuspecting collector. A safer bet is to purchase a certified example, which remains affordable, as PCGS and NGC graded MS-65 examples of any of the three dates can easily be found for around $20, and MS-66 graded steel cents can be found for around $40, regardless of mint mark.

Spend a little more: Besides a complete (3-piece) set in MS-65 or MS-66 condition (which won’t break the bank), collectors can aim for a MS-67 graded example of the steel cent. PCGS graded coins at that level sell for about $150. With MS-68 graded examples being the finest known for all three dates, an MS-67 would be among the finest known survivors of this iconic issue. The most common steel cent in MS-68 is the 1943D, which still sells for over $1500, making the MS-67 a very nice and more affordable alternative. 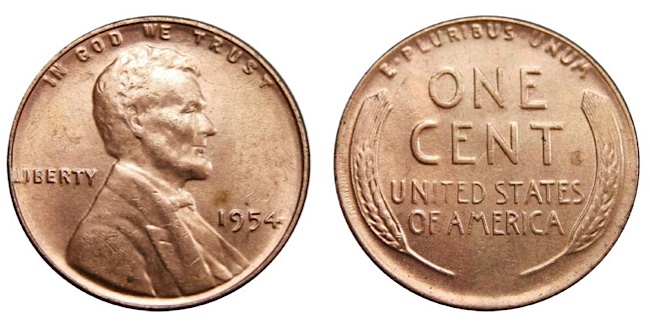 This might seem like a strange addition to this list, but the 1954 Lincoln Wheat cent is actually quite an interesting coin. Struck at the Philadelphia Mint, the issue had a mintage of over 71 million coins. A raw Uncirculated example with nice eye-appeal will probably set you back (at most) a dollar at any major coin show. It is, however, one of the true key-dates of the series in MS-67 RD, with only five coins graded at that level by PCGS. For whatever reason this date tends to come weakly struck, lacking eye-appeal with heavy bag marks, and even grading a 1954 Lincoln Wheat cent at the MS-66 RD level is quite a feat. This makes a high-end PCGS MS-65 RD for less than $25 an excellent value.

Spend a little more: Even though a 1954 Lincoln Wheat cent is quite difficult to grade at PCGS in MS-66 RD (your author has tried), such coins can be found with some searching, as many collectors submit this date in hopes of the elusive MS-67 RD; collectors should be able to find a PCGS MS-66 RD for about $150 (at present the PCGS Population Report shows almost 500 coins certified in that grade). Definitely not cheap, but with the last auction result for a MS-67 RD being $23,500, it almost seems like a bargain.

Proof Lincoln Wheat cents can be divided into three periods: 1909 to 1916, 1936 to 1942 and 1950 to 1958. All highlight the design by Victor David Brenner, but for the collector on a budget the last period (the beginning of the modern Proof set era) provides the best opportunities. Sold in complete sets with the other circulating coins of the time in Proof format struck at the Philadelphia Mint, mintages range from 51,386 for the 1950 Proof issue to 1,247,952 Proof coins in 1957. Most surviving coins display reflective surfaces, with a strong strike and excellent eye-appeal. Many coins come with full mint red surfaces, though some display various degrees of toning.

A good option for collectors would be to source a 1950 Proof Lincoln Wheat cent. Not only is this the first year of the modern Proof set era, it is also the lowest mintage for Proof cents from the 1950s. A PR-65 RD or PR-66 RD can be found for less than $100 with relative ease, which provides a decent value for a relatively scarce coin in a popular series. Another option would be to source a coin graded “Cameo” by PCGS, which means that the contrast between the devices and the fields is exceptionally high. While much scarcer than a non-cameo, a collector should be able to find such a coin from the late 1950s for just a little more than a non-cameo graded coin, and definitely under $100.

Spend a little more: Despite lower mintages, the 1936 to 1942 is also an affordable series, although a little more difficult to find in Gem Proof condition. Still, for about $150, a collector could purchase a coin such as the 1941 (mintage of 21,100 coins) in PR-65 RD, providing another option to purchase an older Proof coin from this long-running and iconic series at a reasonable cost.