Although the half dollar was used for the majority of early commemorative coins, the denomination has been used only periodically within the modern era. From 1982 to date, the United States Mint has issued 18 different commemorative half dollars in uncirculated and proof versions. Assembling a complete collection of these coins represents an achievable goal, which is less costly than the more frequently issued gold and silver issues, and still provides an intriguing display of the diversity of U.S. commemorative issues. 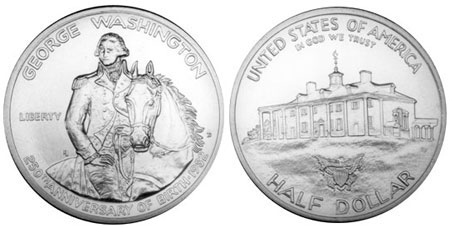 The first issue of the modern era was the 1982 George Washington Half Dollar, issued to celebrate the 250th anniversary of the birth of the first President. The design by Elizabeth Jones featured Washington on horseback on the obverse and a view of Mount Vernon on the reverse. These coins were struck in 90% silver, representing the first 90% silver coins to be produced by the US Mint since the 1964-dated circulating coins. Both proof and uncirculated versions were available with a maximum authorized mintage of 10 million. These coins remained available for sale until the end of 1985, selling more than 7 million pieces. 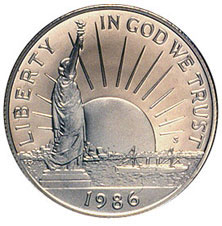 The first copper-nickel clad composition commemorative half dollar was issued in 1986 to celebrate the 100th anniversary of the Statue of Liberty. The maximum mintage was even higher at 25 million pieces, although pricing was lower due to the lack of precious metals content. Across proof and uncirculated versions, this issue sold nearly 8 million pieces, which still represents the highest overall sales for a modern commemorative issue.

In the following years, half dollars would be issued within programs to celebrate the bicentennial of Congress, the golden anniversary of Mount Rushmore, the 1992 Olympics, Christopher Columbus, the Bill of Rights, World War II, the World Cup, and the Civil War Battlefields. 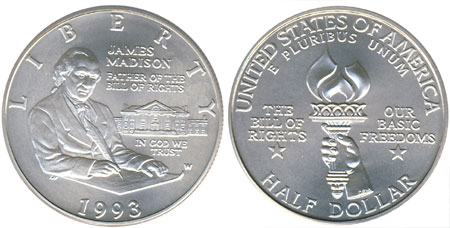 The 1992 Columbus Half Dollar was interesting in that one century prior, the US Mint had issued the first early commemorative coin to mark the 400th anniversary of the explorer’s discovery of America. The 1993 Bill of Rights Half Dollar is noted as the only modern commemorative half dollar besides the 1982 George Washington issue to be struck in 90% silver. The 1995 Civil War Half Dollar often generates stronger interest from collectors and features a design by Don Troiani, an artist noted for his depictions of battle scenes.

From 1995 to 1996, the US Mint issued four different commemorative half dollars for the Atlanta Olympics. In a similar situation to the gold and silver Olympic coins of the same program, the overload of issues resulted in some collectors passing on the offerings. This resulted in relatively low mintages for the 1996 Swimming and 1996 Soccer Half Dollars, which have traditionally been viewed as key issues.

Following the passage of legislation by Congress limiting commemorative programs to only two per year, the number of issues declined and the use of the half dollar denomination became less frequent. Only four commemorative half dollars have been issued in the last 15 years. These have been included in the programs for the Capitol Visitor center, First Flight Centennial, the Bald Eagle, and the U.S. Army. 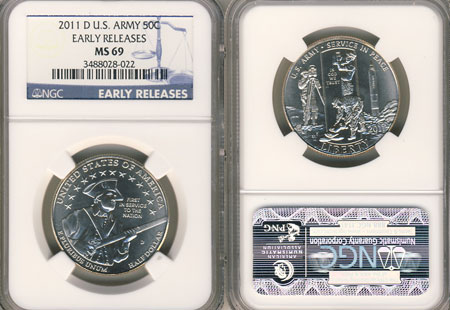 The 2008 Bald Eagle Half Dollar fared the best in sales with more than 300,000 pieces sold across proof and uncirculated versions. The 2011 Army Half Dollar represented the other extreme, with just over 100,000 pieces sold. Some have heralded the uncirculated version of the Army Half Dollar as a new key date, since it represents a fresh mintage low. This issue is also noted as being extremely difficult to find in the top grade of MS 70.

The US Mint will be issuing the next commemorative half dollars in 2013 as part of a program to honor the United States Army 5-Star Generals. This will be followed by another half dollar issued in 2015 to mark the 225th anniversary of the US Marshals Service.