Proof Nickels have been produced for collectors since the denomination was introduced in 1866. Every type had Proof versions struck, although not all dates in the Buffalo Nickel are known in Proof format, since production of Proof coins ceased during the First World War and would not resume until the mid 1930s. A type set of these Proof coins is an interesting collecting opportunity but can be somewhat challenging as high grade Proof nickels can get rather pricey. There are, however, more opportunities where it is possible to collect a Proof nickel set that is relatively easy and inexpensive to complete. This article will focus on one of those sets, consisting of a mere six coins, the 1938-1942 Proof Jefferson Nickel “short-set”. The set, however, can be challenging, especially if pursued in high grade with cameo contrast.

The Jefferson Nickel was introduced in 1938 to replace the Buffalo Nickel, which had been in use since 1913. The new series was designed by Felix Schlag, who had won a Mint organized contest, in which contestants were asked to design a coin honoring Thomas Jefferson, third President of the United States. Unlike the Lincoln Cent and Washington Quarter, the new design would not commemorate an anniversary of the president’s birth, but instead could be seen as another move toward former Presidents on all circulating American coinage.

Proof coinage for collectors was reintroduced in 1936, after a hiatus of two decades in which no Proof coins were sold to collectors. All denominations in use would be struck in Proof format, including the Buffalo Nickel. In 1938, when the Jefferson Nickel was introduced, it meant that Proof coins of both designs were available to collectors that year proof coins were only issued for the new design. Proof coinage would continue until 1942, when it was once again halted, this time as a direct result of World War II, circumstances virtually identical to the first hiatus in 1916.

In 1942, the design of the Jefferson Nickel was slightly altered, but more importantly, the “nickel” would no longer contain nickel for the first (and only) time in its history. Nickel, like other materials, was much in demand during the War and in order to save on the Mints usage the composition was changed to 35% silver, 56% copper and 9% manganese. The coins, especially in circulated condition, have a somewhat darker appearance. They are also readily identifiable by the mintmark, which was moved to the reverse, right above Monticello. The War Nickels were the first coins on which a “P” mint mark was placed on coins struck at the Philadelphia Mint, a practice which would not become customary until the early 1980’s on other denominations. 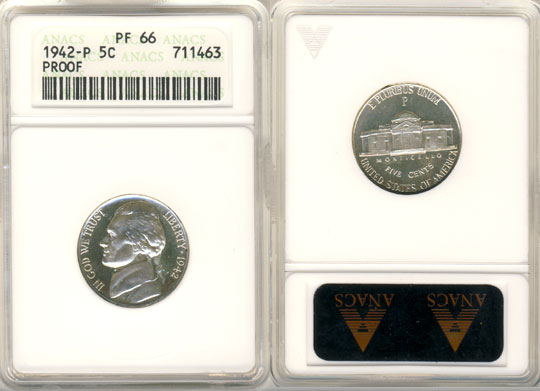 Interestingly enough for the collector of early Proof Jefferson Nickels, the Mint decided to strike both the old variety in nickel as well as the new silver War Nickels in Proof format. The coins are equally as scarce, with both having a little less than 30,000 Proofs produced, although the War Nickel Proof is more in demand as a one-year type coin in Proof format. This brings the total number of coins needed for this short set up to six, which is very doable.

The mintages, however, are not huge, nor is the quality of the typical Proof of this era. As such it is not as easy of a set to complete as it might seem at the first time, although it is not extremely difficult either. It probably falls right in the middle depending on the grade you are seeking. The lowest mintage of the series is the second year of issue, when 12,535 Proofs were struck. The 1942 (regular composition) had the highest mintage, with a total Proof output of 29,600 coins. The other four years fall somewhere in the middle. Interestingly enough the mintage of Proof Jefferson Nickels are generally higher than the other denominations (except for the Proof cents of the time), indicating that there was some early interest in collecting the Proofs as part of the series, not as part of Proof year sets.

While many Proof Jefferson Nickels of this era are still found in gem condition, higher grades are very scarce to even rare. Dies were used for longer periods of time without being polished extensively in between, resulting in an overall lack of eye-appeal. Cameo examples with good contrast of any of the dates are rare, and much in demand. The 1941 is completely unknown in cameo at PCGS, while populations for the other dates generally number a few. PCGS has certified a sole Deep Cameo 1942-P War Nickel, which is one of the finest known of the whole series and of the utmost rarity.

After production of the Proof War Nickels, no Proof Nickels would be struck until Proof production recommenced at the Philadelphia Mint in 1950. These more modern coins are of a different appearance and were produced with more care, although some of the early 1950’s remain very scarce in high grade with cameo contrast. They are not as difficult as the 1938-1942 short set but are also very interesting to collect.