Late last year the U.S. Mint announced that the mintages of the 2010 bullion versions of the five ounce America the Beautiful (ATB) silver coins would be limited to 33,000 of each issue, which is an extremely low number for a bullion coin.  Since then the modern coin market and hobby have to a large extent been dominated by the ATB silver coins.  As with collecting any series of coins, there are advantages and disadvantages to collecting the ATB coins, and in this case, to collecting one version (bullion or numismatic) over another. 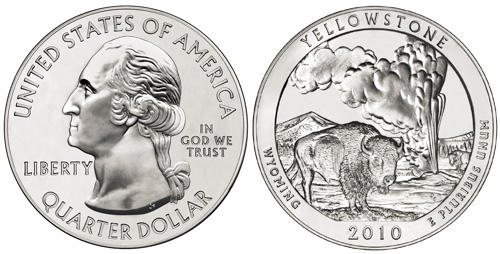 As a result of the U.S. Congress’ decision to create yet another multi-year precious metal-based series with the ATB coins, collectors’ budgets are being strained more than ever.  This is partly because silver has risen dramatically in the past year, even taking into account its almost 30% drop in the past week after almost surpassing its 1980 nominal high of $50 an ounce.  It is also a result of the proliferation of U.S. Mint coin products and series in recent years.  If a collector has any intention of completing a series, he or she needs to decide which series best fits their needs, or which is most feasible for them to collect.

Although I was skeptical of these coins when they were first proposed, as were many, I became intrigued by the ATB coins for several reasons.  The first is the unusually low 2010 mintages, but the coins are also quite compelling for other reasons.  They are the first five ounce coins the U.S. has ever issued, and the national parks images they depict are very attractive.  Every collector has a favorite, perhaps Yellowstone, Grand Canyon, or Glacier Park, and it is hard to deny that the large format of the coins depicts the beauty and majesty of the parks in a way the ATB quarters can not.

The ATB coins, as I have argued before, are a good way to add to one’s silver portfolio, especially if purchased below melt value, which was possible in some instances.  The bullion versions, in particular, were intended as an alternative to the American Silver Eagle series (ASE).  Because the 2010 bullion coins had such a limited mintage, authorized purchasers (AP’s) saw them as numismatic coins and initially priced them accordingly.  But the bullion coins are supposed to carry about the same premium over silver content as ASE’s.  The 2011 coins, of which the first two issues were just released (for Gettysburg National Military Park and Glacier National Park), are being sold by AP’s and other large bullion and numismatic companies at much more competitive prices than the 2010 coins were initially priced.

The recent drop in silver prices resulted in prices for the Gettysburg and Glacier National Park coins of approximately $220-230 per coin based on silver at roughly $37 per ounce.  The premium over silver per ounce works out to about $7, which is only $1 more per ounce than ASE’s currently sell for.  The bullion ATB’s have certain obvious advantages over ASE’s. They have changing designs with five new issues per year, they are unique and attractive as discussed above, and their mintages will pale in comparison to ASE’s, which are made in the tens of millions.  The 2011 coins have mintages of roughly four times the 2010 coins, and possibly more if warranted by increased demand, but the 2011 issues are still low mintage bullion coins. It is unclear if future mintages will be increased, as a result of greater demand, or if they will be decreased because buyers are deterred by higher silver prices or sheer exhaustion.

Another challenge besides rising silver prices for ATB collectors is where to store the coins, especially if housed in PCGS or NGC holders.  Even the raw coins stored in plastic capsules are quite bulky, and I wonder how collectors will find space to store their ATB bullion collections as they continue to grow over the course of the 11-year series. 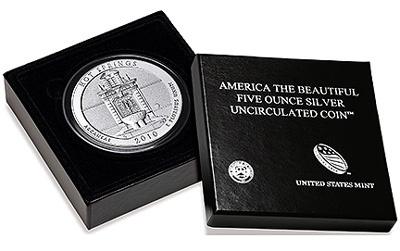 The 2010-P Hot Springs coin, the first numismatic version, was released on April 28 at a price of $279.95.  Most people expected a quick sell-out, but high silver prices may have deterred some buyers.  Others may have been frustrated by having their order suspended and later canceled.  Unless they checked their order status on the Mint’s web site repeatedly, they may not have realized their initial order was canceled, and that they needed to place a new order.  My order was suspended and canceled, so I called the Mint and placed a new order.  I was pleasantly surprised to get right through to a helpful Mint representative, which almost never happens when I contact the Mint by telephone even when a new issue is not being released.

Other buyers may have been waiting to see if the coin sold out quickly, and may have canceled their orders after seeing there was no quick sell-out, although initial sales were very strong.  Despite the lack of a sell out as of May 5, these coins continue to sell for substantial premiums on e-Bay.  The most recent completed transactions I have seen were in the range of $400-420, and early sales were $500 and more. If the Mint’s one coin per household restriction is lifted, I expect the remaining coins would sell out quickly.

Collectors who opted out because the coins did not sell out immediately may regret their decision in the future, as I am confident there will be strong long-term demand for the 2010 coins.  A relevant example may be the 2009 Ultra High Relief (UHR) coins which were minted to demand, but which today command strong premiums over their melt value.  Raw UHR coins are now selling for almost $3,000 each, even though the coins have only about $1500 worth of gold, and high-grade pieces command even higher prices 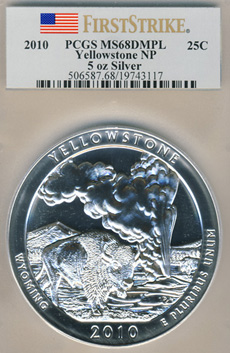 An important difference between the ATB bullion and numismatic versions is the finish on the respective coins.  The Mint has been rather tight-lipped about the special vapor-blasted finish on the numismatic versions, and collectors are eager to see the new coins.  In addition, as buyers of the 2010 bullion coins have discovered, those coins sometimes have highly mirrored finishes that have been designated as prooflike (PL) and deep mirror prooflike (DMPL) by the grading services. High grade PL and DMPL coins, as I have discussed before command prices that can exceed the value of an entire raw bullion set.

I have not yet seen any of the first two 2011 coins, which dealers will begin shipping around mid-May after they receive them from the Mint, other than in photographs.  I have no idea if some of the 2011 bullion coins will have PL/DMPL surfaces, but I believe that is a distinct possibility, and that is something the numismatic versions will not have, as I understand it.  Finally, the numismatic versions, which receive special care and handling when they are made, are likely to grade much higher than the bullion coins, none of which have been graded higher than MS69 by the top grading services.  It is likely that the numismatic versions will mostly grade MS69 and MS70.

The last consideration I would like to highlight is that as with the First Spouse Gold Coins, the ATB series will continue over an extended period of time, and most precious metals experts believe metal prices will continue to march upward but not in a straight line.  That will make it increasingly difficult for most people to assemble a complete collection.  Such a development is likely to make some of the coins very scarce because sales are likely to decline, as they did after 2007 with the spouse coins.  Many collectors are likely to buy only their favorite designs, and subsets are likely to emerge.

But over time, as I tried to explain with my proposal to make a smaller size first spouse coin, the market for such coins will likely face strong headwinds.  To continue increasing in value over time, apart from precious metal content, coin series need a strong two-way market.  That may be in doubt for the ATB series, if silver prices rise substantially over the course of the series, and eventually price most collectors out of the market.