As the shortest-lived half dollar series of the 20th century, the Franklin Half Dollar series might seem like an easy set to complete at first glance. Looks can be deceiving however, as this series can be particularly difficult to complete if the focus is on obtaining well struck pieces with good eye appeal. Yet the series remains very popular with both beginning and advanced collectors, and learning all of the nuances of this series can take some time. In this article I will give a brief introduction and give some tips on how to make building a collection of Franklin Half Dollars an endurable yet fun challenge while taking a look at the reasons why this set is so much more difficult to complete in high grades. For simplicity’s sake I will focus on business strikes for now, as the Proofs are a whole different animal that deserve their own article.

The Franklin Half Dollar was introduced in 1948 to replace the Walking Liberty Half Dollar, which had been struck since 1916. While the latter coin was and is heralded as one of the most beautiful designs ever made by the United States Mint, it was felt that a change to the largest silver denomination produced at  the time was appropriate. Benjamin Franklin, the famous statesman, inventor, and scientist, had been featured on paper money (which, as a printer, was one of the things he printed in colonial America), but he had never been featured on a United States coin. It would be the final denomination introduced for general circulation not to feature a former President on it until the Susan B. Anthony Dollar was struck in 1979.

Production commenced in 1948 at the Philadelphia and Denver Mints, while the San Francisco Mint struck its first Franklin Half Dollars in 1949. The release of the new half dollar was just one year after the first Mint Sets were sold to the general public, containing two examples of each denomination struck at any of the three Mints in use at the time. While the sets must have resulted in a number of high grade half dollars, even the coins in such sets were often baggy from the time they rattled in bins with other coins prior to being placed in the cardboard holders in which the coins were sent to the buyers. These holders and the accompanying envelopes contained sulfur which caused the coins to tone over time. Often seen as tarnish by non-collectors, originally toned coins from these sets are much in demand and often sell for a premium.

No Mint sets were released in 1950, meaning that all coins that have survived in high grade must have come to the public through commerce. Nicely toned coins are virtually unknown for this year, and gems are difficult to acquire because of bagmarks. Yet the coins of this year are not as difficult as some other years that would follow. Bagmarks would remain a problem throughout of the series, with the design being relatively flat, with none of the surfaces well protected from coming in contact with other coins. The design has many open spaces which are prone to bring up hits more noticeably than on coins of different designs.

One problem that is persistent throughout the series is that of strike. Many Franklin Half Dollars are weakly struck, failing to bring up all the details of the dies, in particular the details of the Liberty Bell on the reverse. This problem was also realized by the major grading services, PCGS and NGC, which use a special attribution to indicate well struck coins. The bottom of the Liberty Bell shows horizontal lines that are only complete on well struck coins, with the part near the crack often showing weakness in particular. Coins with this line complete are denoted as having “Full Bell Lines”, abbreviated as “FBL”, and can be extremely difficult for some years. One also has to realize that the grading standards seem to adhere to different standards, with NGC generally being stricter when it comes to Full Bell Lines than PCGS. 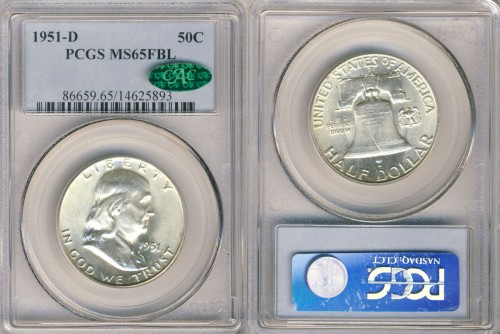 This gets us to the most difficult coin to find in gem condition with Full Bell lines, the 1953-S. For some particular reason it appears that the dies at the San Francisco Mint were set apart further than at other Mints that year or any other years, resulting in many weakly struck coins. Bagmarks are also prevalent this year, and many coins that are weakly struck don’t even grade higher than MS-63 at best. As a result a gem with full bell lines easily fetches five figures at auction making this set extremely difficult to complete in MS-65FBL, or any FBL grade.

While Franklin Half Dollars were generally saved in quantity and cannot be considered rare in uncirculated grades, many bagmarks ruin most of the coins for collectors of certified coins. While most other dates besides the 1953-S are not extremely difficult to find well-struck, bagmarks and scratches remain a constant problem throughout the series. Difficult dates in gem that are virtually unknown in higher grades are the 1959, 1961, 1962 and 1963 Philadelphia issues, despite having some of the higher mintages of the series. Besides that any coin in MS-67FBL can be considered to be a true grade rarity, as very few Franklin Half Dollars exist at that grade level. 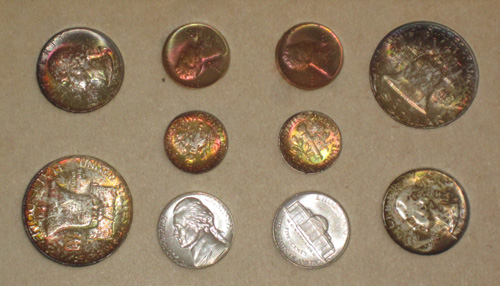 As previously mentioned there are relatively few toned Franklins available, and if they do come up for sale they are generally one of the earlier years. The main reason is that the Mint sets in cardboard holders were replaced with sets in plastic in 1959, stopping a run of coins in material that caused the coins to tone wildly. For the later years a coin would have to have spent many decades in certain albums (only a few albums will work) or envelopes under the right circumstances. This is one of the reason that most of the later Franklin Half Dollars, if not all, generally come white or with only minor toning.

As you can see there are many different reasons why a set of 35 different Franklin Half Dollars is much more difficult than might seem at first glance. Collectors of toned coins will have difficulty finding non-white coins that are attractive, while collectors of the highest certified grades will realize how rare some of the issues are without many bagmarks. As such we have a challenging series which can give many years of collecting fun, but also a lot of frustration after looking through thousands of 1961 (or any other date) Franklin Half Dollars for that one super gem.