Although the United States Mint has confirmed details of the upcoming issuance of 2010 Proof Gold Eagles, the status of the other collectible version of the American Gold Eagle remains undetermined. 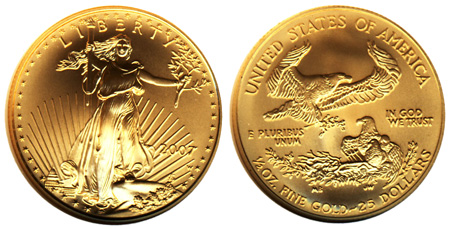 From 2006 to 2008, the US Mint issued “collectible uncirculated” versions of the American Gold Eagles. These coins were struck on specially burnished blanks, which were hand fed into adapted coin presses one by one. The “W” mint mark was included below the date, to further distinguish the coins from the standard bullion version.

During the three years of availability, the uncirculated Gold Eagles were produced in four different sizes: one ounce, one-half ounce, one-quarter ounce, and one tenth ounce. The coins were sold directly to collectors individually or as part of a four coin set containing one of each coin. For 2006, the one ounce coins were also incorporated into two of the 20th Anniversary Gold Eagle Set offerings. For 2008, the one-half ounce coin was included in the Double Prosperity Set.

Sales of the newly issued collector coins were low in comparison to the traditional proof coin offerings, prompting the Mint to discontinue the fractional versions of the uncirculated Gold Eagle. For 2009, the US Mint planned to offer the one ounce coin, however this was ultimately canceled due to high demand for bullion coins.

Based on a recent inquiry to the United States Mint, a final decision has not yet been made as to whether the 2010-W Uncirculated Gold Eagle will be produced before the end of the year.