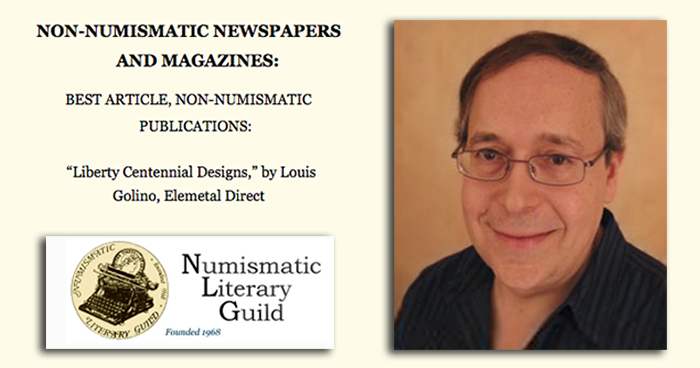 The award for the best article in a non-numismatic publication was given for his story “Liberty Centennial Designs,” published in the magazine Elemetal Direct, about the 2016 trio of gold Liberty coins.

Louis has been writing about coins since 2010 for a wide range of publications and websites. He began by writing for Coin Update on modern U.S. coins. He then wrote a weekly column for CoinWeek on classic and modern coins and precious metals for five years, and wrote regularly for American Hard Assets / Elemetal Direct. In 2015 he started a monthly column on world coins in The Numismatist; he also writes periodic feature stories there, including several cover stories. In 2016 he resumed writing for Coin Update and started a feature on world coins.

Elemetal Direct, which ceased publication earlier this year, was a publication of the company Elemetal, a major precious-metals conglomerate. The magazine was previously called American Hard Assets.

The Numismatic Literary Guild, founded in 1968, is an organization made up of several hundred writers, authors, editors, publishers, photographers, catalogers, curators, and other individuals from around the world who are engaged in publicizing and promoting numismatics through writing and related skills.

Each year, the NLG holds a symposium on timely issues affecting its members and stages an annual bash—which, besides the awards presentation, features a lavish buffet and hobby-related skits and song parodies. The NLG also publishes a newsletter.

Membership information can be found at the NLG website.