In late May, a federal court judge in Texas issued a ruling against a New York-based firm that owned a third-party grading company between November 2010 and December 2011, citing the Racketeer Influenced and Corrupt Organization Act (RICO) and potentially awarding close to $1.9 million for the plaintiffs.

You can read about the lawsuit by clicking here. You can also read Judge Nelva Gonzales Ramos’s Findings of Fact and Conclusions of Law (PDF) in which she summarizes and then expands on the case. In essence, the company that offered the coins may have given the perception of independent objective grading. It sold $727,569 worth of coins to the plaintiffs that later were assessed as being worth only a fraction of that sum, including an evaluation by Heritage Appraisal Services that put the value at $190,865.

Viewers may find the particulars of the case intriguing from a hobbyist’s perspective. We occasionally see probable self-slabbed coins in professional-looking holders that may give the appearance of independent objective grading but that only may involve seller and grader as the same person. Will this case eventually be used as a precedent for the auction companies and portals that offer those coins and assess value according to PCGS and/or Red Book prices?

Our intent is not to pass judgment on any one company, auction house or portal (which is why we are not naming any of them). But you can judge for yourself if the coin below, an 1890 Morgan dollar, passes as MS66 worth $23,000 (PCGS recommended price). That is how the coin was listed by an auction house offering lots on an Internet portal. 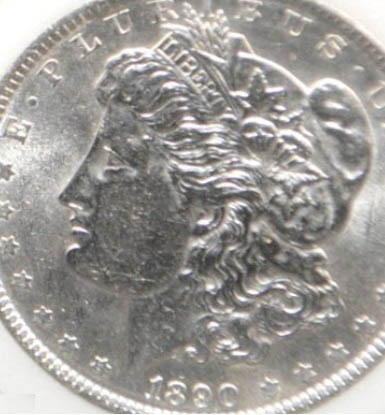 One can never really be certain about the grade from the poor quality of the photo. (The coin gives the appearance of being almost uncirculated and dipped due to the bag marks on the cheek and general lack of luster.) And, of course, it is inappropriate to use PCGS suggested prices for coins not holdered by that Newport Beach-based company. But for comparison sake, view an authentic 1890 MS66 graded by PCGS: 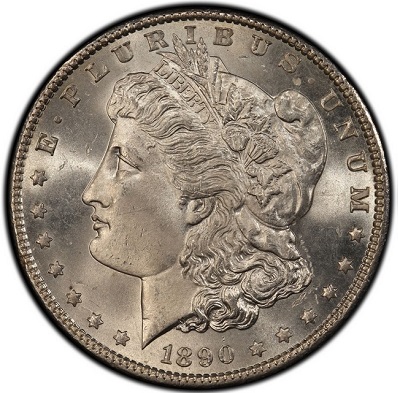 As noted earlier, Coingrader Capsule is not interested in naming companies or portals; but we do want to offer some guidelines that may mitigate against any overhyped value of coin lots.

1. Sellers should only cite PCGS coin prices for PCGS coins. Each holdering company has different standards.

2. Know the reputations of holdering companies. Reliable ones include the “eBay-recognized” firms of PCGS, NGC, ICG and ANACS.

3. Master grading so that you are able to identify condition, strike, luster and eye-appeal of any coin.

As for auction houses and portals, we recommend that they re-evaluate their terms of service to mitigate against sellers that exaggerate value.