Precision, attention to quality and detail, pride in craftsmanship, and careful accountability are qualities that shine through in the coin production activities at the West Point Mint. Under plant manager Ellen McCullom, the facility strikes millions of precious metals coins each year for investors and collectors around the world in addition to its duties safeguarding billions in precious metals assets.

Due to the high security of the facility, it is not open to public tours, but this article will provide an inside look at how coins are produced at the West Point Mint. 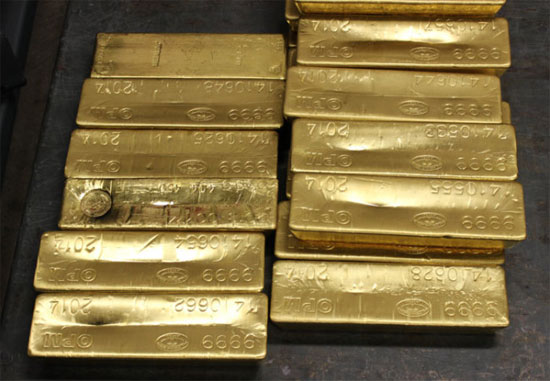 The production process for many gold coins begins with the 400 ounce gold bars which the facility safeguards. Some of the bars are sent to contractors where they will be alloyed and manufactured into planchets. The planchets for silver coins are typically sourced directly from contractors.

Before any of the planchets are used in production, they must be tested to ensure they meet contract specifications for weight and alloy. Shown above is an optical emission spectrometer used within the assay process. 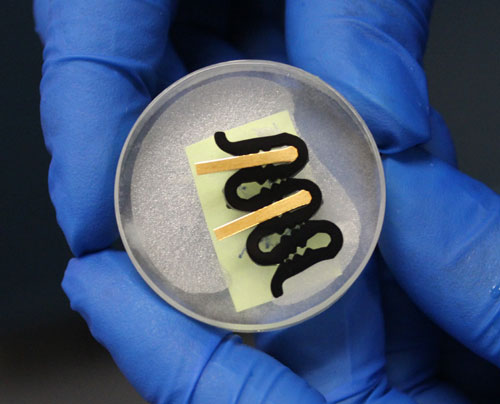 In addition to verifying the weight and alloy, the dimensions, surface roughness, and grain size are also examined. Shown above is a planchet which has been sectioned to examine the internal grain structure. 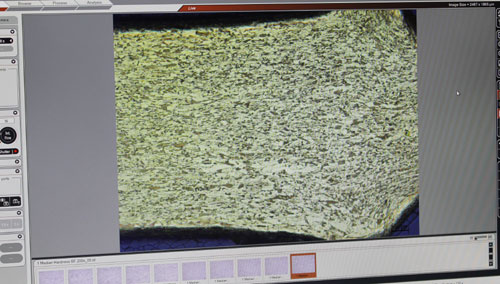 Shown above is a magnified cross section of a gold blank showing the grain structure. 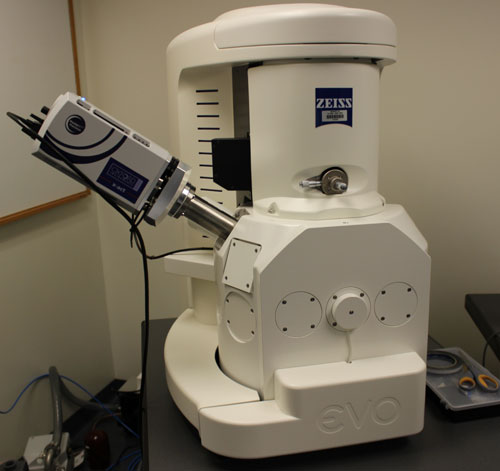 A scanning electron microscope can also be used to detect and more closely examine any processing defects or impurities. Details on any imperfections are relayed back to the suppliers for corrective action. 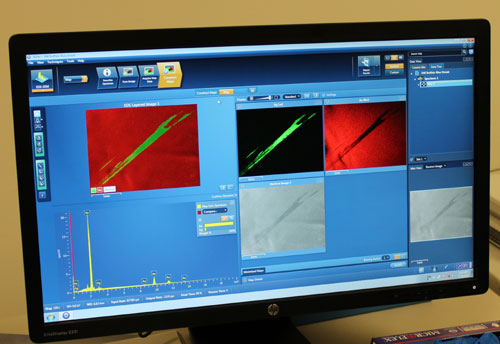 A blue streak which appeared on a 24 karat gold planchet was found to be silver. 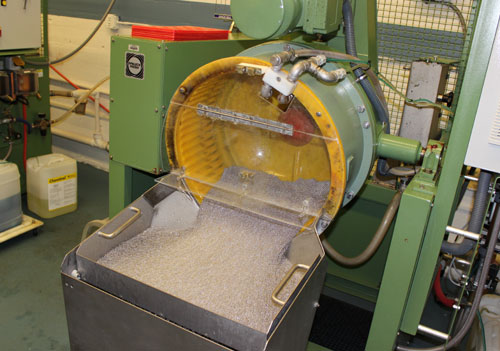 Once determined to be acceptable, the planchets move to the burnishing room where they are burnished against steel shot. 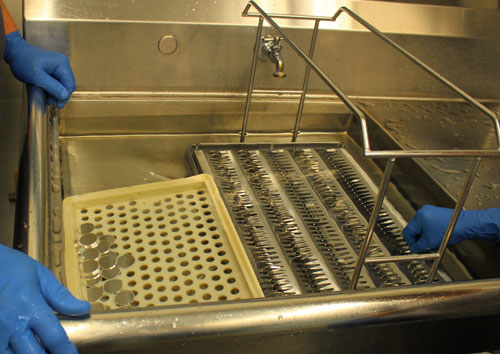 The burnished planchets are washed and then receive an ultra sonic drying. After this point, they are ready to be used in production. 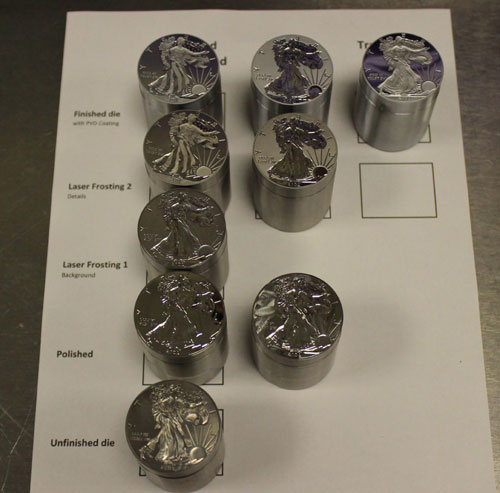 The West Point Mint also performs the steps necessary to get unfinished coin dies sent from the Philadelphia Mint ready for use in production. The image above shows the progression of steps necessary to go from a raw die to a finished die for coins which will have an enhanced uncirculated, reverse proof, and traditional proof finish. 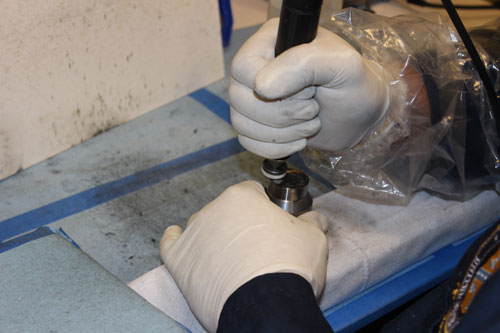 First, the unfinished dies are polished using hand tools and diamond paste. This serves to remove any imperfections and create a basic finish. Additional polishing is performed with a machine first using brushes and then felt heads to further improve the finish. 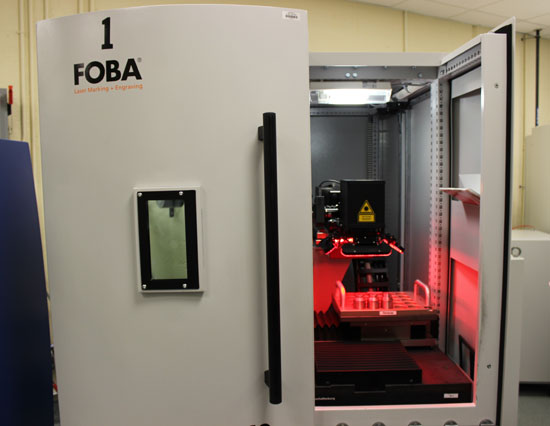 Once the polishing process has been completed, the dies are laser frosted in the machine shown above. 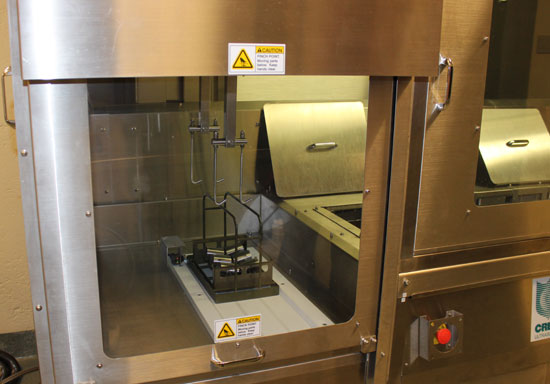 After the laser frosting process is complete, the dies receive an ultrasonic cleaning. From here, the dies move to a clean room where a final inspection is performed and a PVD coating is applied. PVD, or physical vapor deposition, applies a thin chrome coating which serves to increase die life. 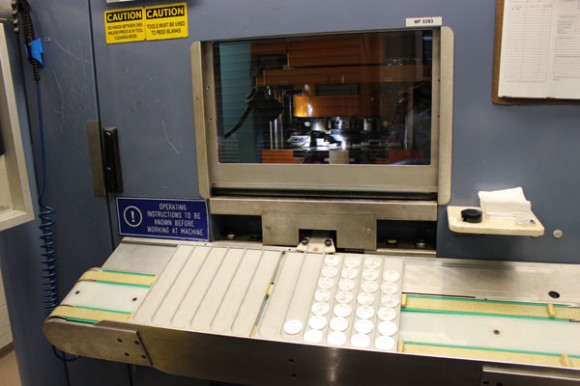 With the planchets and dies prepared, the coin production process can begin. The machine above is shown striking the popular American Silver Eagle bullion coins. 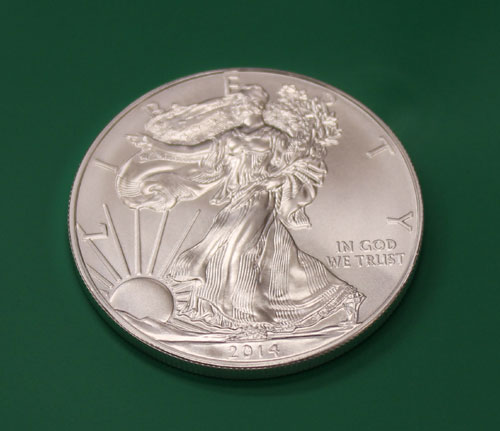 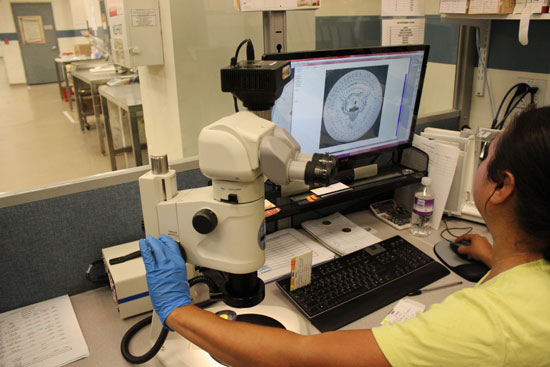 Quality control takes place right on the production floor. Here, one of the reverse proof silver Kennedy Half Dollars is being examined. 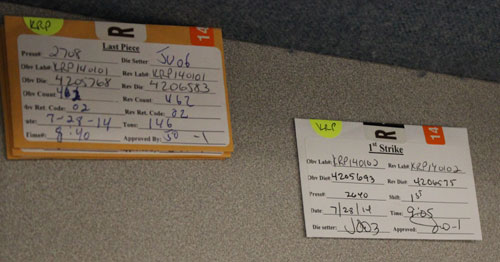 The first and last strikes from each die receive close examination. 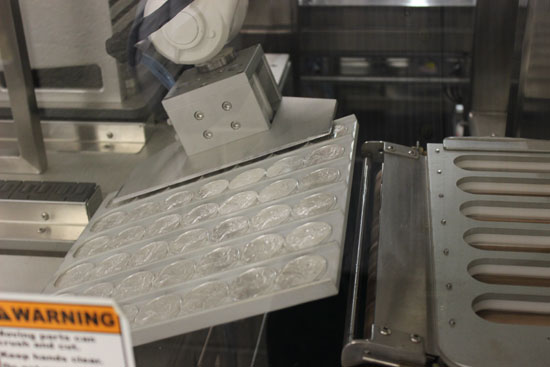 The packaging process for certain high production coins is automated. Here, trays containing American Silver Eagle bullion coins are being fed into a machine which will automatically place the coins in tubes and package the tubes into boxes. Here, the tubes are being automatically filled with 20 one ounce coins each. 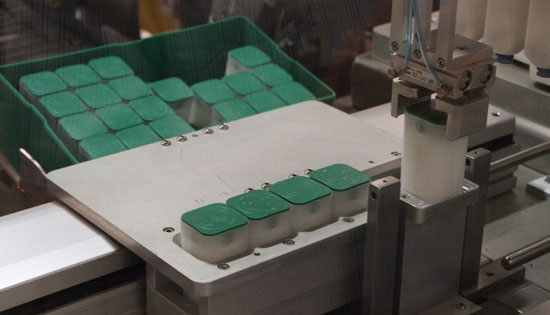 Once the tubes have been filled, they are capped and placed into a green monster box. Each box will contain 25 of the 20-coin rolls, for a total of 500 ounces of silver. The rolls and box are weighed at each step to ensure accuracy. 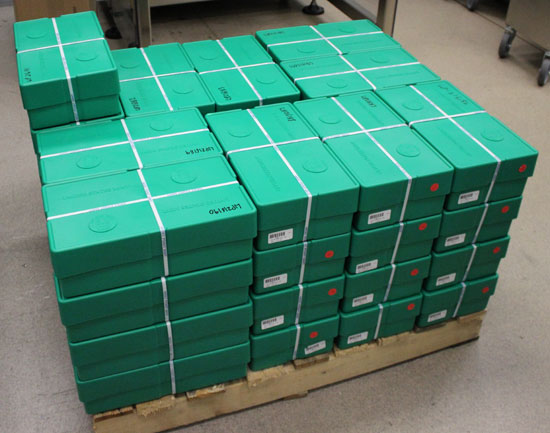 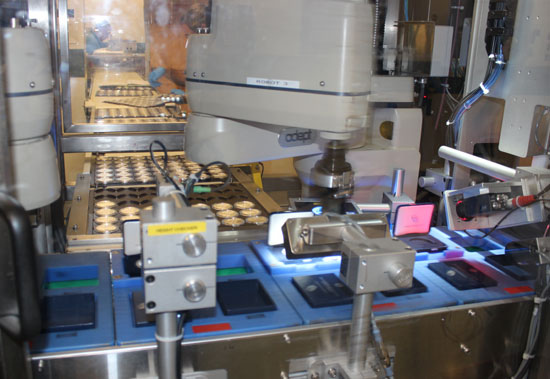 In addition to the automated packaging for the bullion coins, the packaging process for the Proof American Silver Eagles is also automated. The coins are automatically encapsulated and placed in boxes with the accompanying certificate of authenticity. 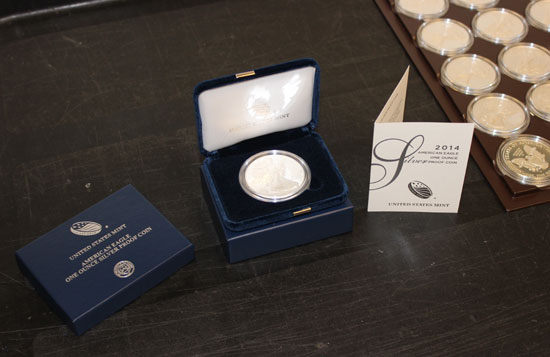 Last year, the United States Mint sold more than 850,000 of the 2013-W Proof Silver Eagles, making it the highest selling numismatic product of the year based on unit volume. 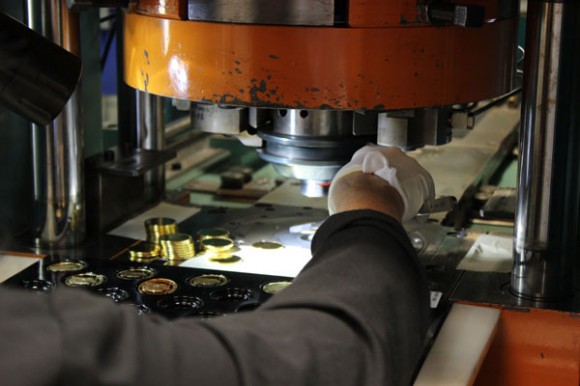 The production process for the 24 karat gold Kennedy Half Dollars is less automated than the higher production Silver Eagle coins. The gold blanks are manually fed into the machine where they will be struck three times under 90-95 metric tons of pressure. 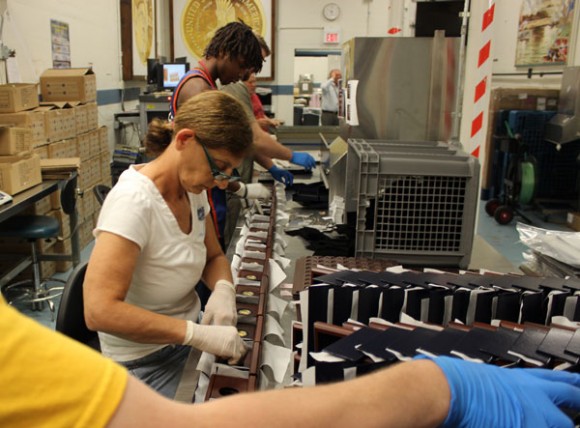 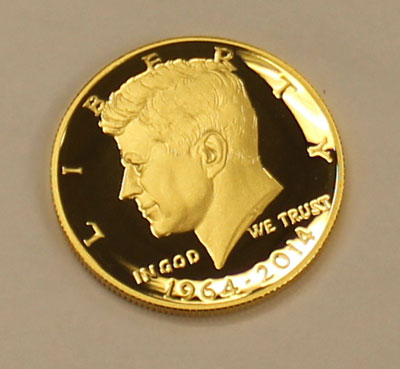 Here is a closer look at the final coin, which contains 3/4 of a troy ounce of 24 karat gold and carries the same diameter and thickness as a standard half dollar. The obverse design features the restored 1964 portrait design created by Gilroy Roberts and the dual date of “1964-2014”. The reverse carries the heraldic eagle design by Frank Gasparro based on the Presidential Seal with an added inscription of the precious metal weight and purity and the “W” mint mark. 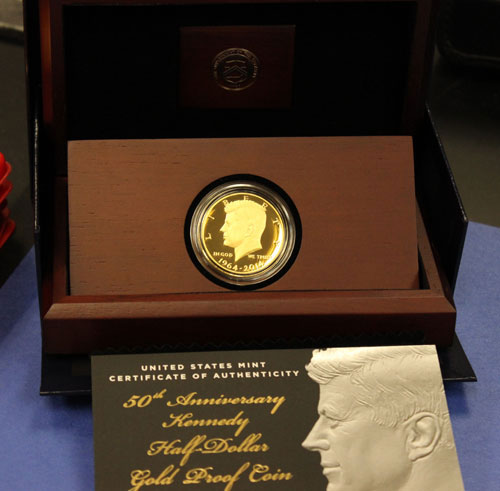 The coins are encapsulated and packaged in a single, custom-designed brown mahogany hardwood case with removable coin well and certificate of authenticity. Sales will begin on the US Mint’s website, by phone, and at retail locations on August 5, 2014 at 12:00 Noon ET. The initial production level is 40,000 units, but demand may very well prove higher. The Mint will evaluate sales activity during the first week of sales and adjust production plans accordingly.