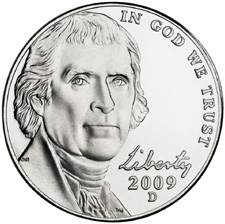 The bill H.R. 6162 Coin Modernization, Oversight, and Continuity Act of 2010 passed in the Senate on November 30, 2010. This was the same day that a separate coin related bill authorizing palladium bullion coins was also passed in the Senate. In order to become law, both bills now only await the President’s signature.

H.R. 6162 was introduced by Melvin Watt of North Carolina on September 22, 2010. The majority of the bill deals with establishing rules and procedures for increased Congressional oversight of coin production. This was likely motivated by the increasing costs of base metals, which have recently made lower denominations more costly to produce than their face values.

At a House subcommittee hearing held in July, the Director of the United States Mint had requested that Congress delegate authority to the Secretary of the Treasury to select coin compositions.

Instead, the bill will require the Secretary of the Treasury to make biennial reports to specified committees on the production costs for each circulating coin, cost trends, and possible new metallic materials or technologies for the production of circulating coins. The Secretary may make recommendations for changes in metallic content or coin production methodology, but Congress would retain the ultimate authority to act on these recommendations.

The bill also contained technical amendments related to bullion coins, which were rendered moot, at least for the current year. One provision seeks to change the law to ensure that collector versions of the Gold and Silver Eagle may be issued each year. Collectible proof versions of the coins have already been issued for 2010. Another provision seeks to change the specifications for the new 5 ounce silver bullion series, which has already been produced and will go on sale next week.