The United States Mint and National Park Service officials will launch the first coin in the new America the Beautiful Quarters Program at a special ceremony scheduled for April 20, 2010 at 10:00 AM CT. The ceremony will be held at the Hot Springs National Park Administration Building located at 101 Reserve Street, Hot Springs, Arkansas. 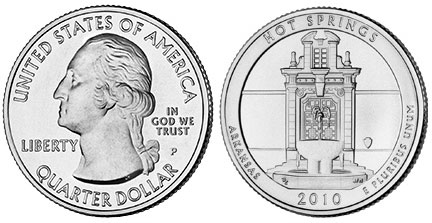 The new America the Beautiful Quarters series will feature a different national park or national site in each of the 50 states, 5 U.S. territories, and the District of Columbia. Similar to the prior 50 State Quarters Program, five different quarters with unique reverse designs will be released each year. The obverse of each coin will feature a portrait of George Washington, with details restored from the original 1932 Washington Quarter.

Hot Springs National Park will be the first site depicted in the new quarter series. The area first came under the protection of the federal government in 1832 as Hot Springs Reservation. The Hot Springs Quarter features the facade of park headquarters building with a fountain in the foreground. This was designed by Don Everhart and sculpted by Joseph Menna.

The launch ceremony will coincide with the park’s 178th anniversary. Children in attendance will receive a free Hot Springs National Park Quarter to commemorate the event. All attendees will be served birthday cake and have the opportunity to exchange currency for rolls of Hot Springs Quarters.

The evening before the launch ceremony on April 19, 2010 at 5:00 PM CT, the United States Mint will host a coin forum. The forum will provide an opportunity for the public to express their views about future coinage and learn about upcoming US Mint coin programs and initiatives. The coin forum will be held at Quapaw Bath House, 413 Central Avenue, Hot Springs, Arkansas.