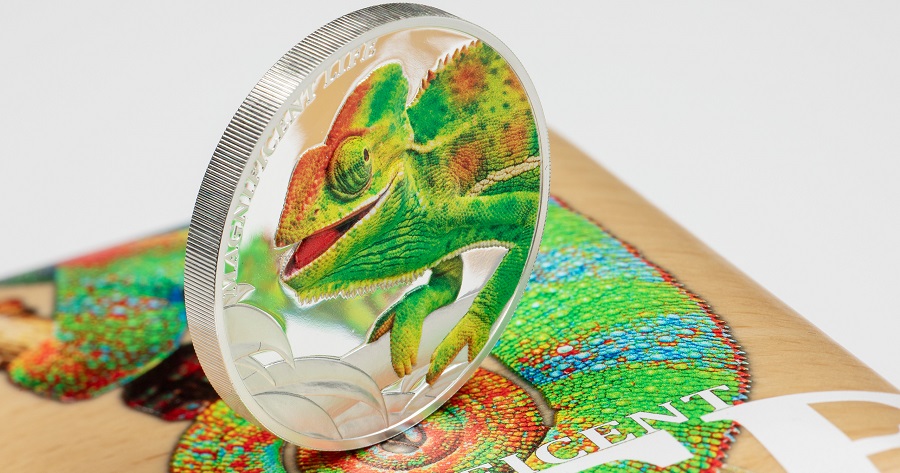 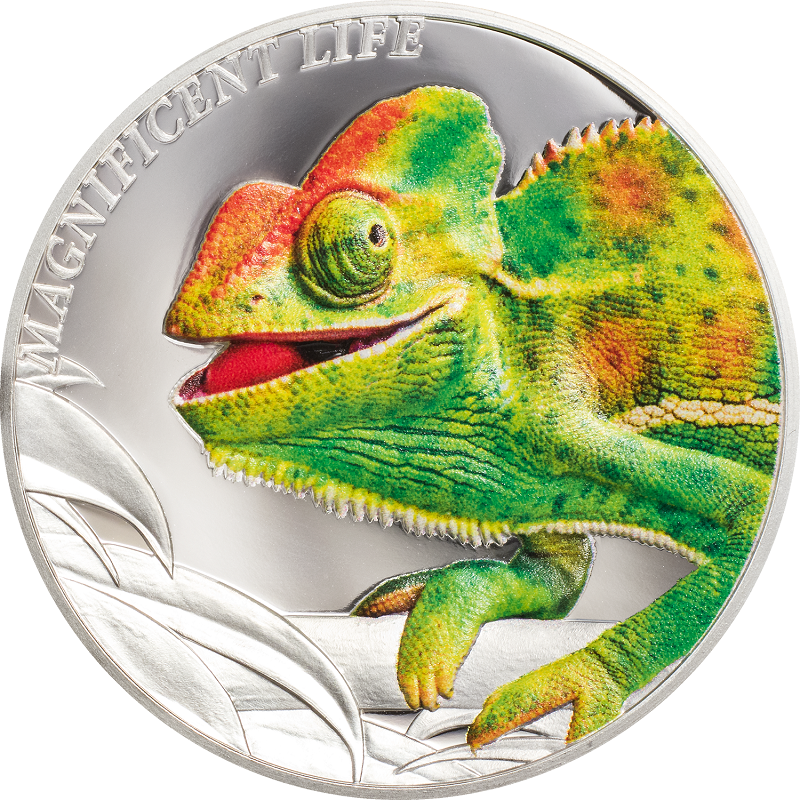 One side features the colored front part of a chameleon to the left on a branch, its head turned towards the observer, in the right-field is the title of the series MAGNIFICENT LIFE. 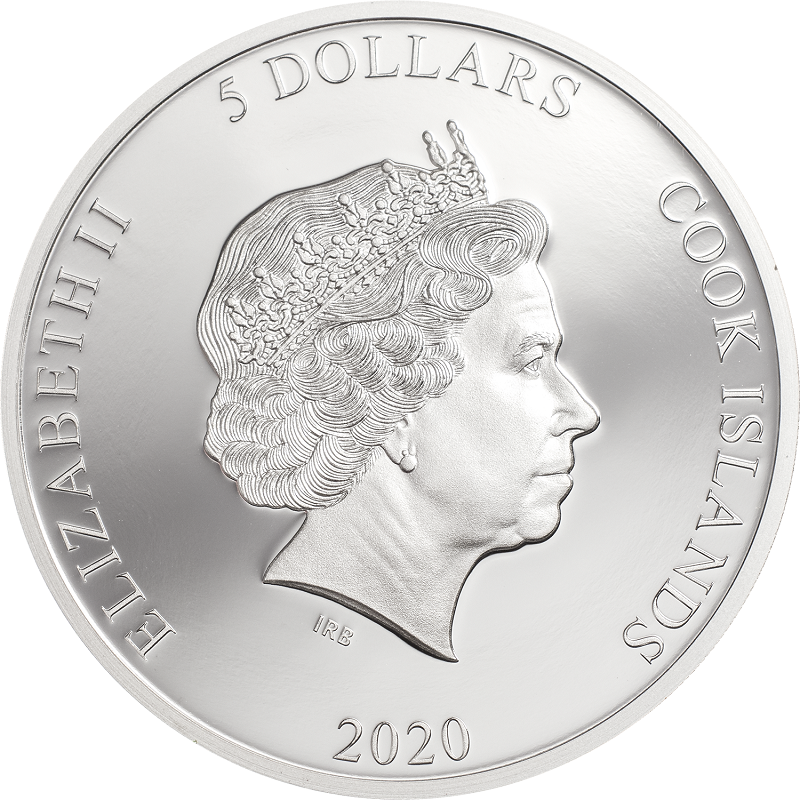 The other side shows the portrait of Queen Elizabeth II by Ian Rank Broadley (signature IRB below the neck). Around it is the legend ELIZABETH II – 5 DOLLARS – COOK ISLANDS / 2020. 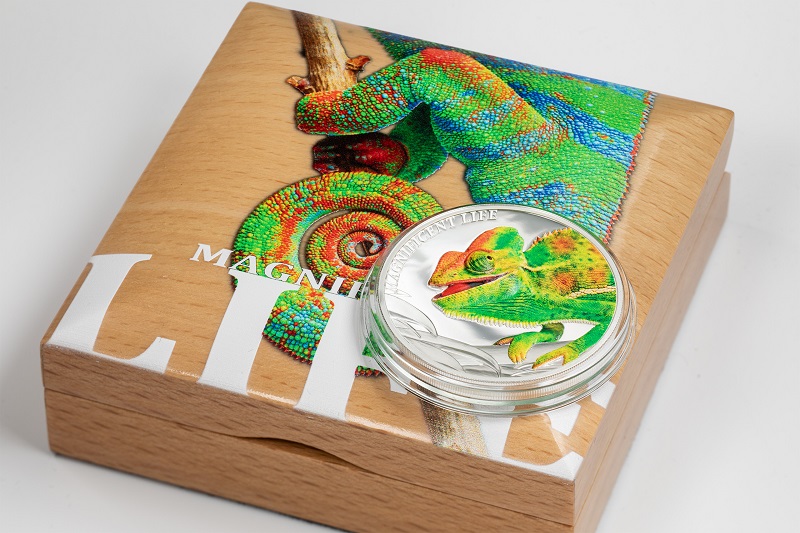 With the sixth issue called Chameleon, CIT completes their successful series “Magnificent Life.” Thanks to realistic animal motifs that combine smartminting with virtuoso color application, Magnificent Life has become a highlight that amazes both animal lovers and collectors. Connoisseurs can tell from the six issues the series consists of how incredibly quickly smartminting technology has developed over the past six years.

One side of the coin features the African chameleon (Chamaeleo africanus). CIT attached great importance on capturing in a striking way on the coin all the special features that make every chameleon a wonder of nature, and achieved this by means of smartminting and color application.

First, there are the incredible eyes: They protrude from the head like little cones and can move independently of each other. Thanks to smartminting, the coin features a realistic, three-dimensional depiction of one of the two eyes.

At least as impressive is the tongue, which is kept in the gular pouch and can extend up to 1.5 times the animal’s body length of 30 to 35 centimetres. The chameleon uses the tongue to catch its prey. Thanks to a sticky secretion combined with the ability to create a short-term vacuum, the tongue has a tensile force of about 0.4 newtons. That’s why CIT made sure that this impressive painter is clearly visible in the chameleon’s mouth in red color.

The extremities, which are designed like pincers, can also easily be recognized on the coin. They are perfect gripper hands for an arboreal species.

Last but not least, the designers placed particular emphasis on capturing the astonishing colorfulness of the animal in a lifelike manner. It is the very reason why the chameleon has become the epitome of mutability in our language. 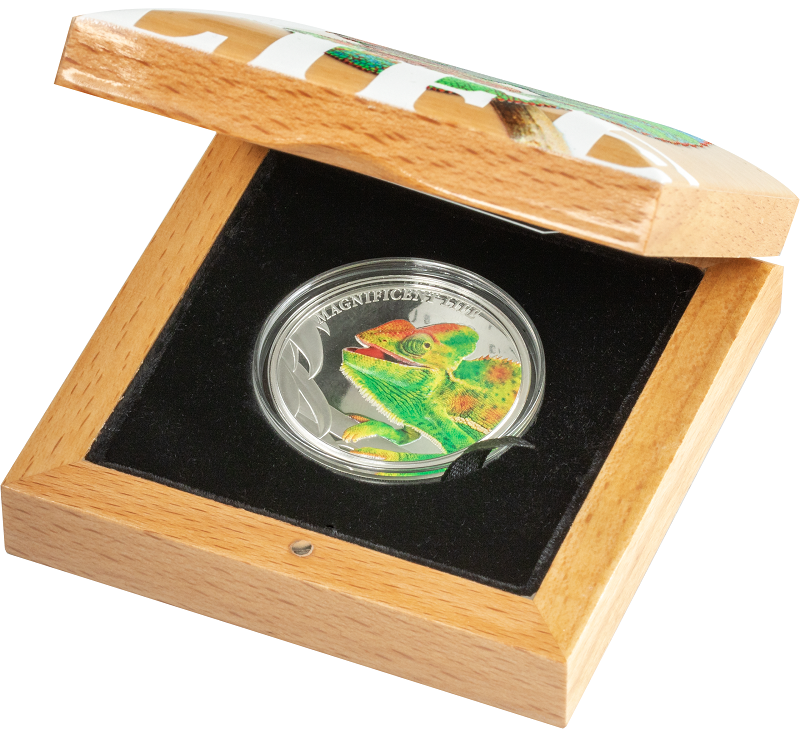 All these incredible characteristics make the chameleon a true wonder of nature and the perfect conclusion of the CIT series “Magnificent Life.”