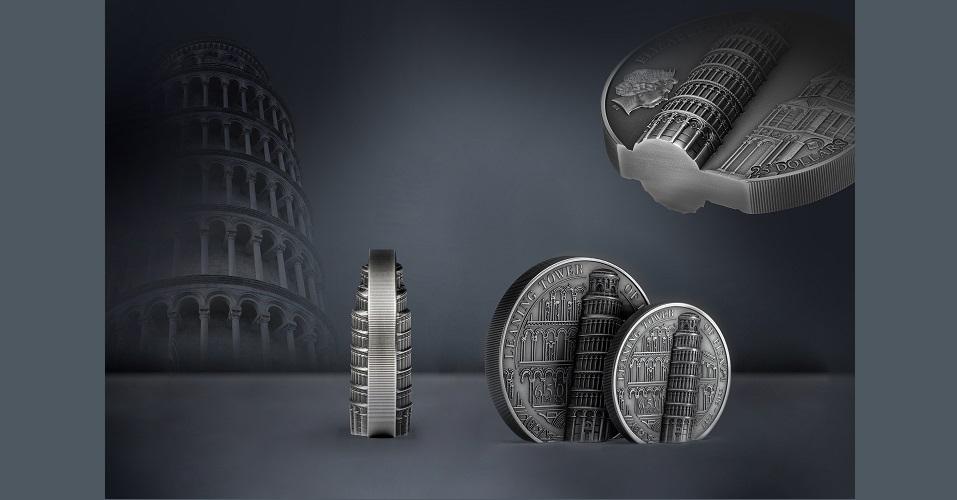 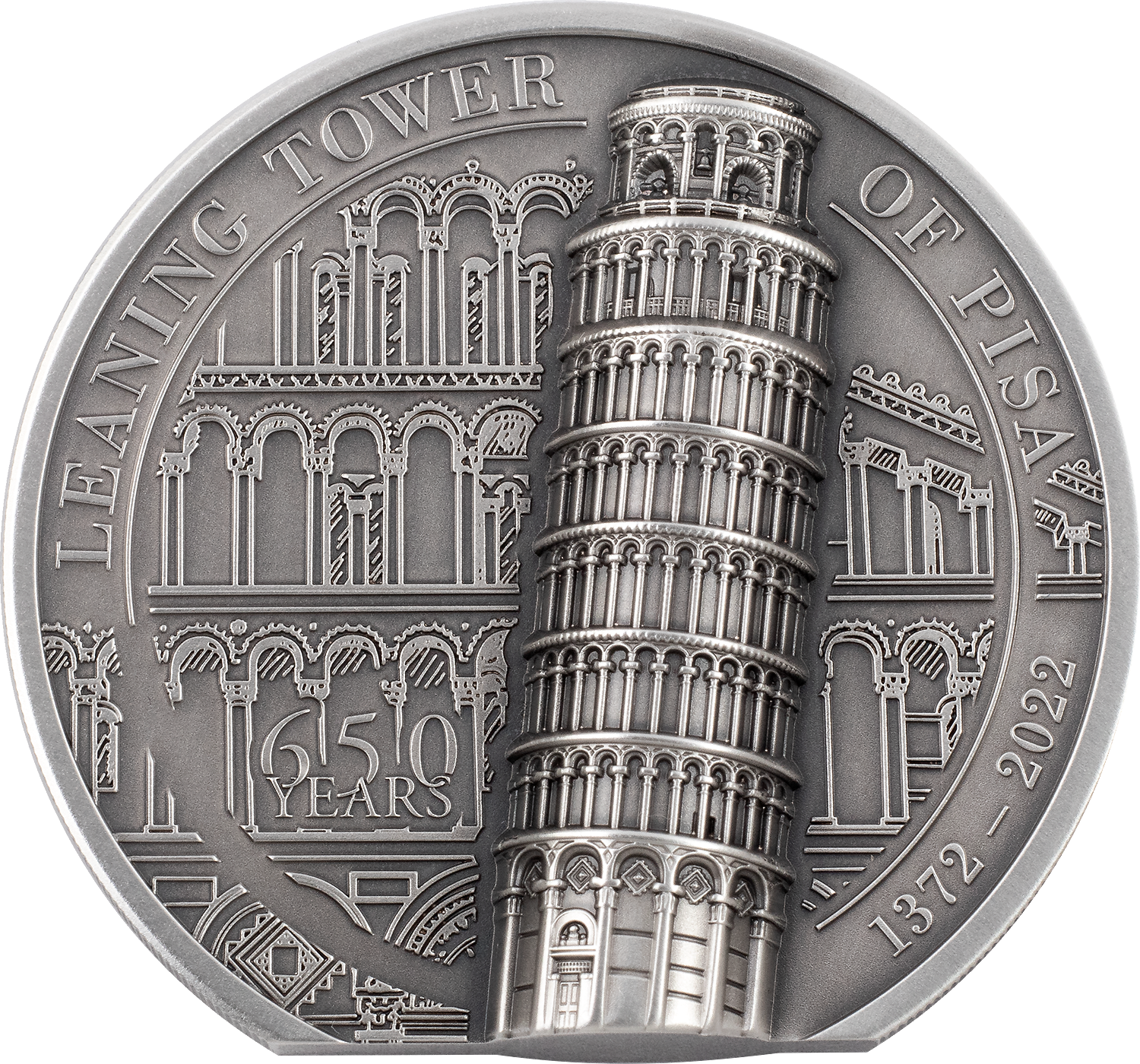 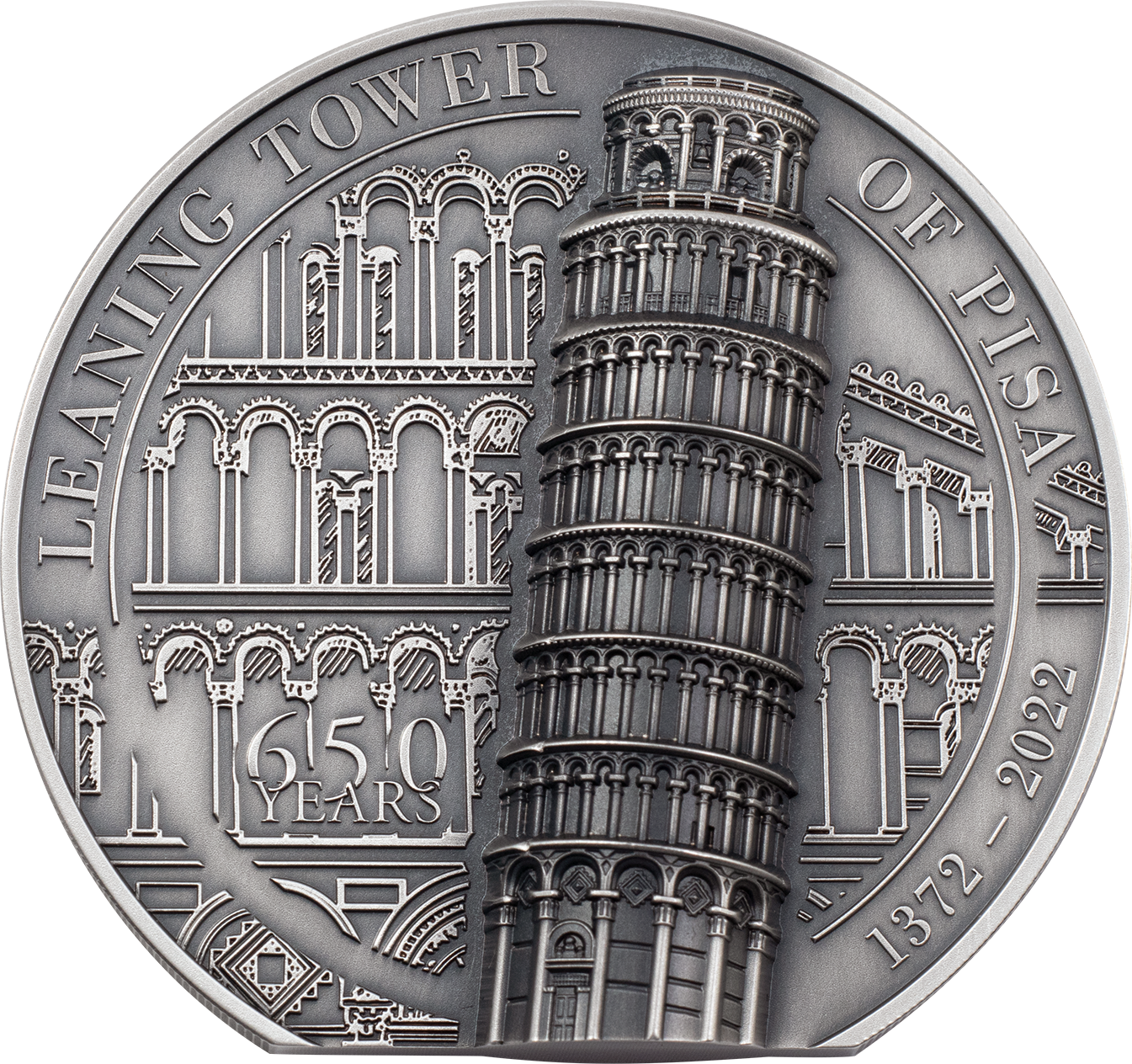 One side features the Leaning Tower of Pisa in front of a sketched elevation of the Romanesque facade; in the arches is 650 / YEARS; around it is the legend LEANING TOWER – OF PISA / 1372-2022. 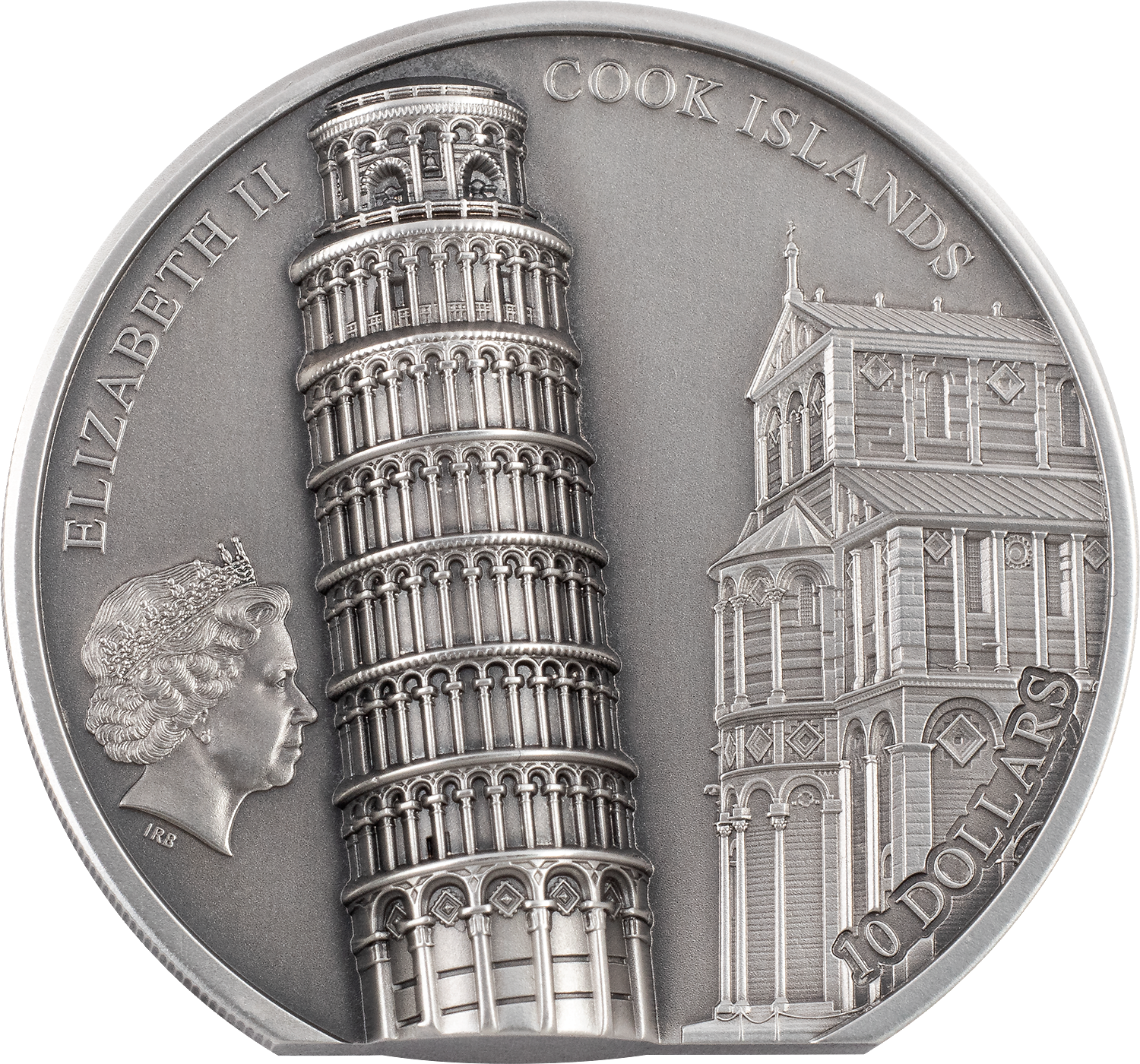 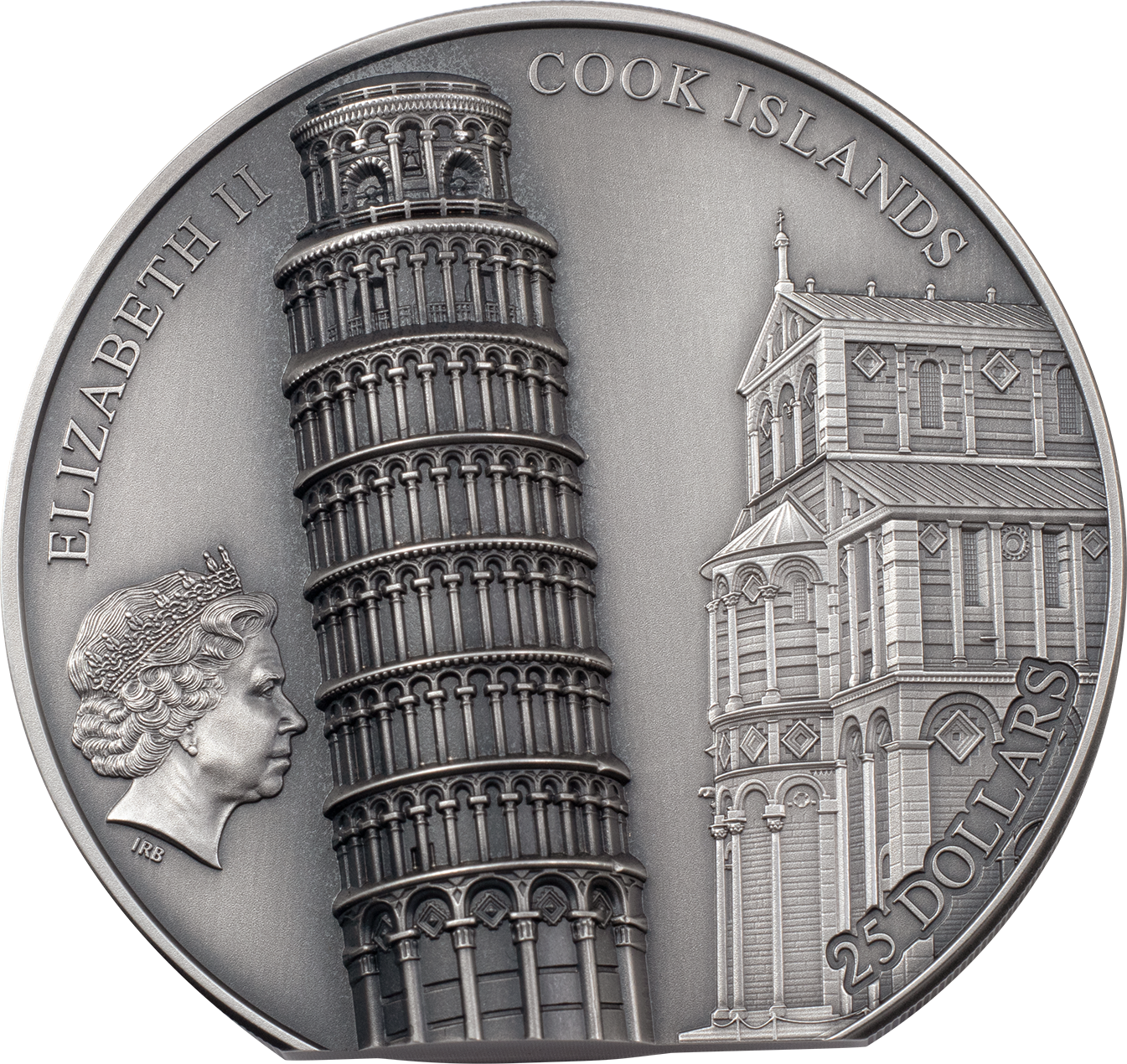 The other side shows the Leaning Tower of Pisa, and to its right is the Cathedral of St. Mary of the Assumption; in the left field is the portrait of Elizabeth II; below is IRB (= Ian Rank-Broadley), and around it is the legend ELIZABETH II – COOK ISLANDS / 10 resp. 25 DOLLARS. 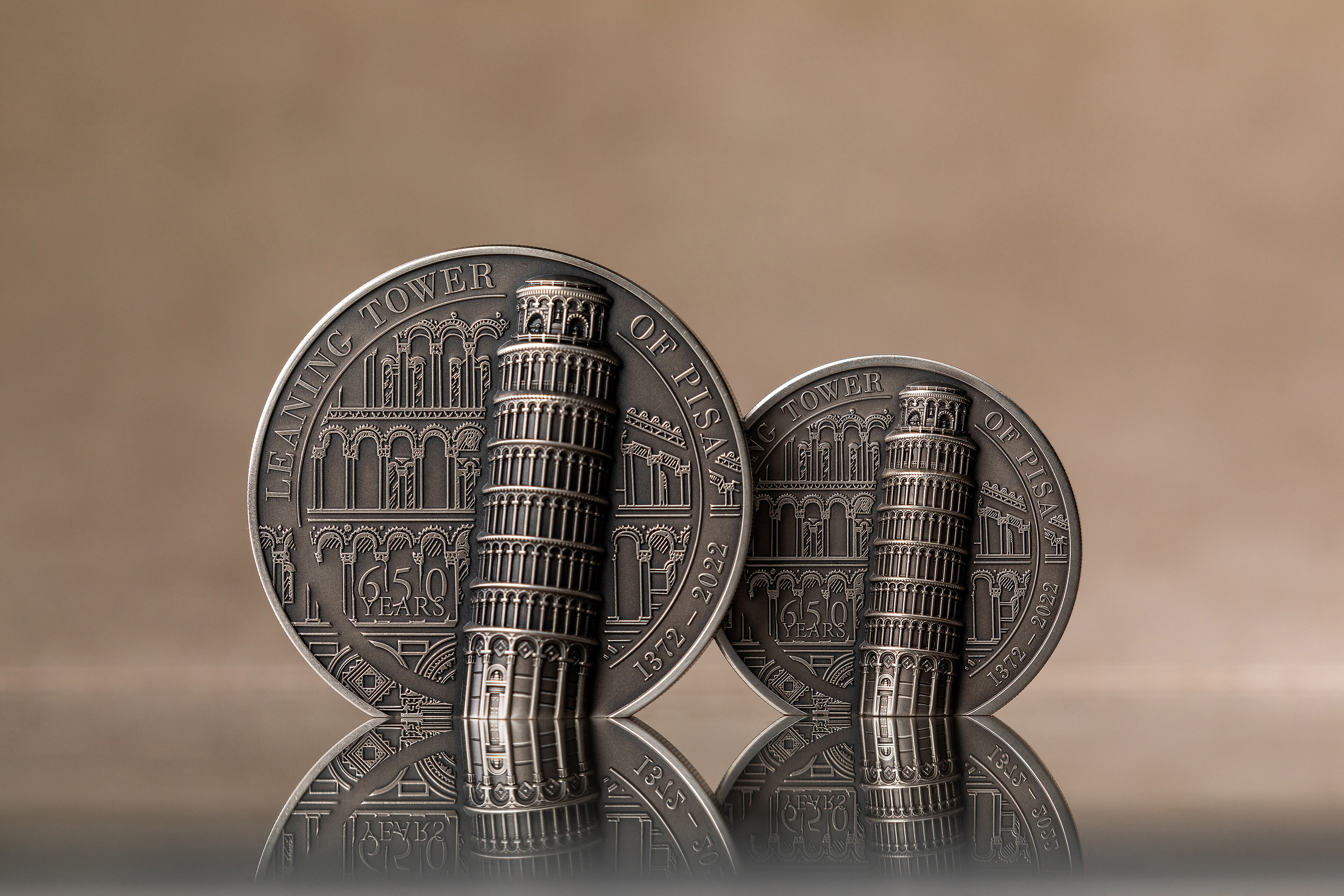 In 2022, the Leaning Tower of Pisa celebrates the 650th anniversary of its completion. On this occasion, CIT dedicates a commemorative coin to what is probably the world’s most popular leaning building. Thanks to perfected smartminting technology, the tower minted in ultra-high relief becomes a three-dimensional miniature sculpture. Therefore, this innovative issue is no commemorative coin featuring a tower on its obverse and reverse — it is a miniature version of the Leaning Tower of Pisa with its two halves being separated by the coin. Thanks to the flat bottom edge, anyone who wants to bring a piece of Tuscany into their home can place the coin vertically, turning it into a miniature sculpture.

The Leaning Tower of Pisa can be found in Piazza dei Miracoli, the Square of Miracles, as the ensemble, which has been a UNESCO World Heritage Site since 1987. Piazza dei Miracoli is one of Italy’s most important tourist destinations. In the center of the square is the impressive Cathedral of St. Mary of the Assumption, whose openwork facade is the first to complete the transition from flat to sculpted facades, a change that marked a new style in Western art. This cathedral is also depicted on one side of the coin referring thus to the fact that the Leaning Tower of Pisa was planned to be nothing but the bell tower of the cathedral. But the architect made some crucial mistakes: He failed to create a sufficiently deep foundation for the tower to stabilize the 14,200 tons of Carrara marble that weighed down on a circle with a diameter of only 12 meters on sandy ground. The result: The building began to sink down while the construction work was still in progress. Until recently, there has been no end to the costly building safety measures aimed at preventing the tower from collapsing. But perhaps it is the very fragility of the structure that attracts thousands of tourists to Pisa every year. 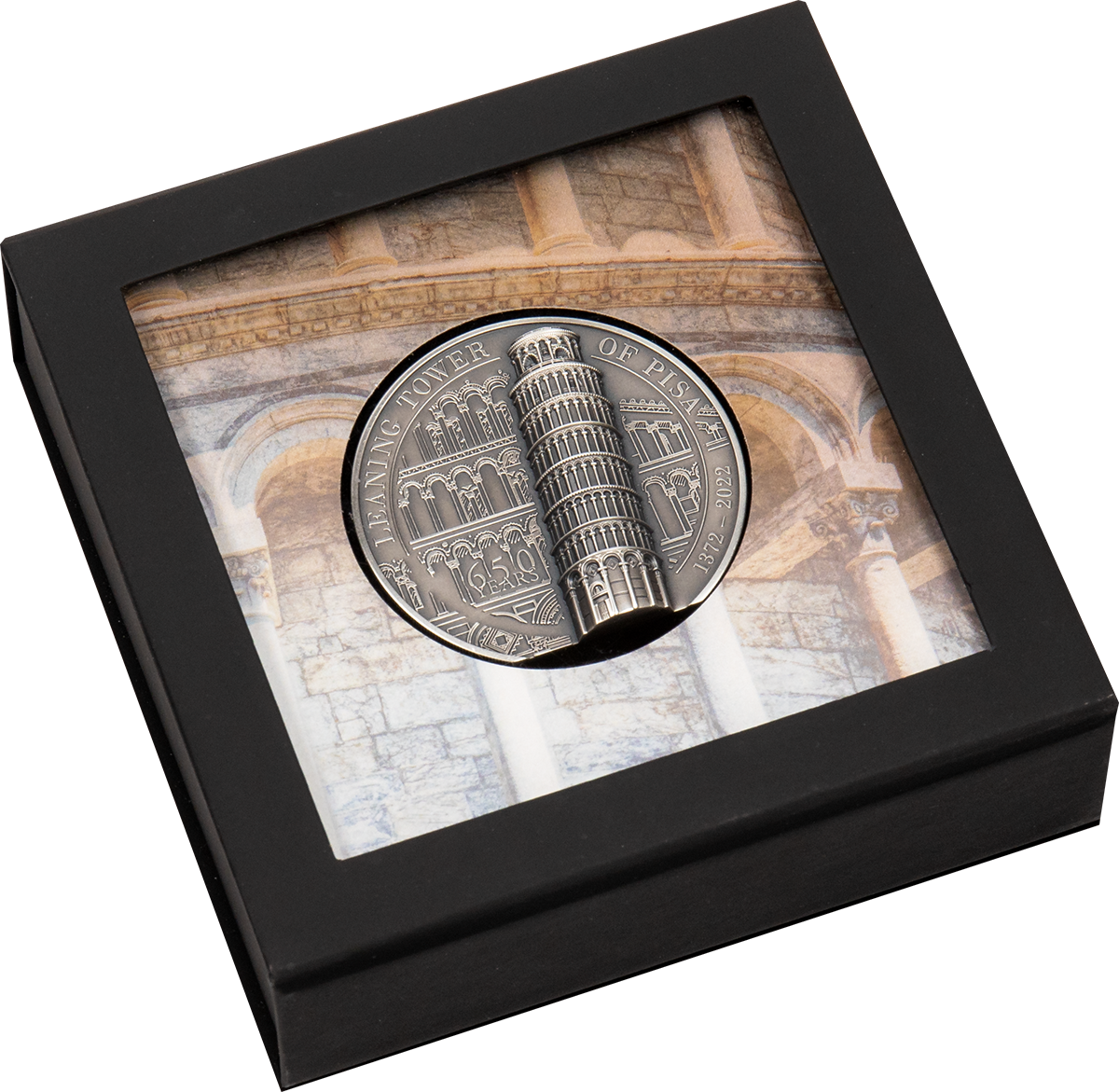 For further information about the coins, please click here.

If you want to fully understand all dimensions of this coin, you have to watch this film.