If you’ve been a regular reader of Coingrader Capsule, you know we have several series running now, including a new one on coin doctoring in addition to the highly popular “Crossover, -under and -out” series on submitting coins graded by one company to another company, to test standards.

In the weeks ahead we will discuss procedures for grade disagreements, which we need to define as it differs from grade resubmissions.

Again as in the column “Slide Marks, Slider Marks, Sliders,” we face the unique numismatic conundrum of hobbyists so detailed that we assign precise numerical grades on complex scales with all manner of codes designating varieties–such as 44 II/I 37 B/Ad (3 TF) (179) I-5 R-7 for the so-called “King of VAMS” 1878-P VAM-44 7/8 Tailfeather Tripled Blossoms–and then misuse the English language on relatively common coin-related practices.

A grade disagreement involves a submission by you or through your dealer to a grading company like PCGS, NGC or ANACS concerning a coin just returned to you that you feel was inaccurately evaluated and encapsulated.

A grade resubmission involves a coin you purchased or own that you did not submit to a grading company but decide in retrospect was inaccurately evaluated and encapsulated.

Typically you’ll find procedures for resubmission on company FAQs, but may be hard pressed to locate easily links that explain how to challenge a grade in a recent submission. Today we’ll deal with a grade disagreement involving an ANACS holdered coin. Readers of Coingrader Capsule are welcome to point to links for NGC and PCGS in the comments section below; but be patient, as I will report on those companies in future capsules. The point is not that it is possible to challenge a grade, but how easily procedures are found on Web sites and what happens before, during and after the challenge.

To do that correctly, one has to receive a slab back from a company that truly qualifies as worthy of challenge. That happened recently with a 1923-S Walking Liberty Half Dollar sent to ANACS and returned with a Details label stating “scratched.”

I would never send a scratched coin for slabbing. I inspected the returned coin carefully and could not see any scratches. There were a few faint lines over the sun on the obverse, but I discounted those as either too faint to affect the grade or minor planchet cracks.

I sent this email to ANACS: “I have been happy with the service of ANACS. However, in this last shipped batch, I disagree with the details label that the 1923-S half dollar is scratched. There are some very minor planchet cracks (barely visible) on the obverse sun. I’d I’d like to send this in for reconsideration. Can you tell me the process and possible cost?”

I received a courteous reply from an executive of the company who instructed me to return the coin for re-evaluation. He promised to provide specifics when a determination was made concerning the challenge. 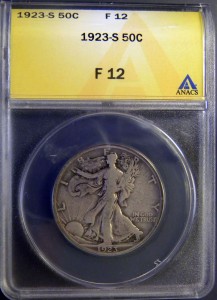 I sent the coin that day and received a reply within 10 days, noting that indeed there were faint scratches on the sun but that they should not have affected the grade because they were too minor. ANACS reholdered the pictured coin, thanked me for my inquiry, did not charge me (as companies do under “grade resubmissions”), and returned the coin via FED-EX, again at no charge.

This is the type of customer service that we need to promote and applaud. Yes, I realize that ANACS tries harder as it generally is considered third-fiddle to PCGS and NGC; but, overal, I trust ANACS as much as if not more so than the the former when it comes to authentication, ancients, and altered surfaces. Moreover, there are no clubs to join or dues to pay, and its rates are among the most reasonable with quick turnover.

You can find details about ANACS submissions here.