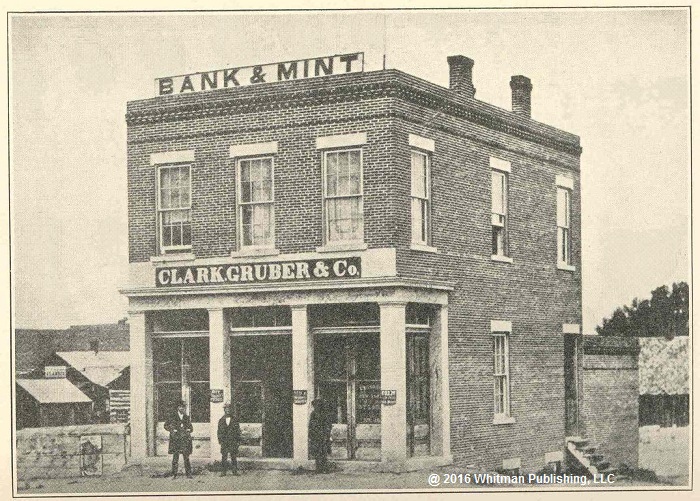 Colorado is a beautiful state, and for coin collectors a very special one, rich with numismatic history and connections. Gold and silver mining became an important industry in the American West in the late 1850s and early 1860s, giving birth to many issues of private and territorial gold coinage. The privately run mint of Clark, Gruber & Co., set up in the mining town of Denver, became well known for the quality of its coins. Turning out denominations of $2.50, $5, $10, and $20, it minted nearly $600,000 face value of gold pieces in less than three years, starting in 1860. 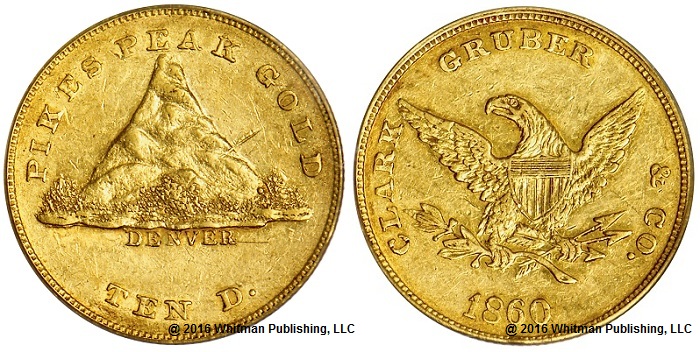 These “coins” weren’t federal legal tender, but they were made of locally mined gold, conscientiously assayed, sometimes even of higher precious-metal content than the Philadelphia Mint’s official issues. Local merchants and pioneers trusted them and accepted them as solid cash. Colorado was made a territory of the United States in 1861. The U.S. Treasury Department saw the growing need for official coinage out West and in 1862 bought the Clark, Gruber & Co. buildings and equipment and opened a federal assay office. From these beginnings the Denver Mint would emerge and grow into one of the nation’s three huge factories for circulating coinage.

Another important “Centennial State” connection for collectors: the American Numismatic Association, headquartered in Colorado Springs. Founded in 1891 and chartered by Congress in 1912 with a mission to “advance and promote the study of . . . numismatic items,” the ANA today has more than 23,000 members who collect coins, tokens, medals, paper money, and related examples of material culture. Every year at its headquarters on the campus of Colorado College, the ANA holds two week-long Summer Seminar sessions, immersing students of all ages and hobby levels—beginner, intermediate, and advanced—in a unique environment of learning, camaraderie, and fun.

It was in this environment that the Citizens Coinage Advisory Committee held its June 2016 public meeting. 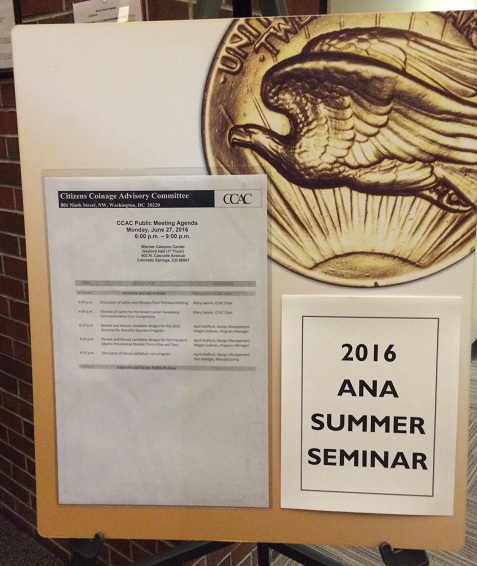 A poster welcomes visitors to the CCAC meeting on the campus of Colorado College, home of the American Numismatic Association’s Summer Seminar.

Established in 2003, the CCAC is a group of 11 Americans who advise the secretary of the Treasury on the themes and designs of circulating coins, bullion coinage, commemoratives, Congressional Gold Medals, and national and other medals. I was appointed to the CCAC in February 2016 as its member specially qualified in numismatics. Other members are qualified as an experienced medallic sculptor (Heidi Wastweet), a numismatic curator (Robert Hoge), an American historian (Dr. Herman Viola), representatives of the general public (Steve Roach, Erik Jansen, and Jeanne Stevens-Sollman), and members recommended by different House and Senate leaders (Mike Moran, Donald Scarinci, Thomas Uram, and chairwoman Mary Lannin). 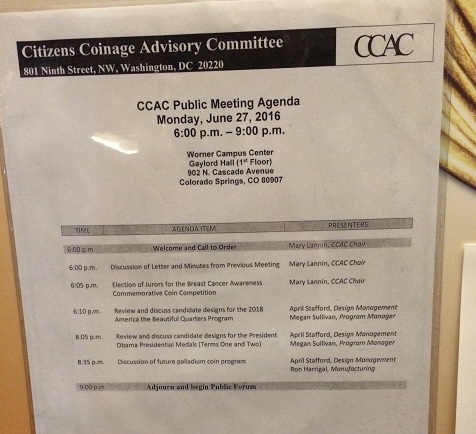 Our June 27, 2016, public meeting started with a moment of silence for Chet Krause, who passed away the week before at the age of 92. Krause figures importantly as a modern pioneer and ambassador of numismatics, the founder of Numismatic News and of Krause Publications, father of many dozens of monumental coin and paper-money reference books and a longtime champion of the hobby. It was fitting that we publicly recognize his passing.

After this memorial, a major part of our agenda was to review, discuss, and vote on designs submitted for five America the Beautiful quarters to be issued in 2018. Our recommendations for the coins for Pictured Rocks National Lakeshore (Michigan), Apostle Islands National Lakeshore (Wisconsin), Voyageurs National Park (Minnesota), Cumberland Island National Seashore (Georgia), and Block Island National Wildlife Refuge (Rhode Island) were reported in Coin Update on June 28. As always, we had a robust conversation around the art portfolios presented to us by the Mint.

Not all of the designs chosen to be recommended to Treasury Secretary Jack Lew were my personal favorites, but that’s the beauty of the CCAC’s process. It brings together 11 seasoned viewpoints that are voiced, debated, and carefully considered in a respectful and orderly public meeting. Then we vote in a weighted ranking process, and the most favored coin designs are chosen as our recommendations to the secretary (as long as they reach a threshold of votes). For Block Island, I preferred the joyful exuberance and energy of two yellowthroat warblers flying over the refuge’s iconic North Light lighthouse. (The relatively small landmass of Block Island is host to more than 70 species of migratory songbirds as they wing along their annual journeys.) The committee’s selection, however, was an artfully focused view of a piping plover on the beach—an equally admirable design that will make an excellent coin. 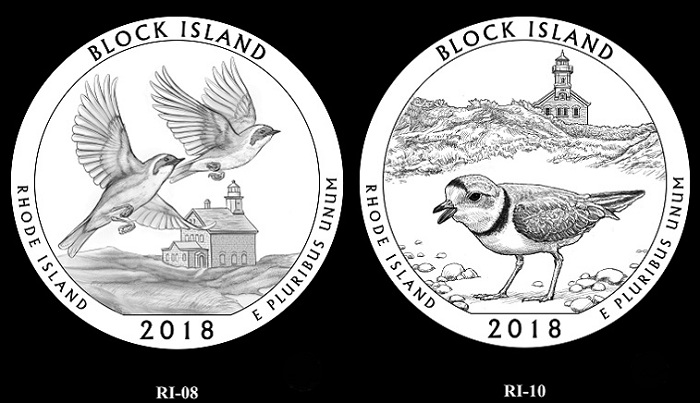 For Georgia’s Cumberland seashore, a charming depiction of a loggerhead sea turtle swimming in the surf was acclaimed by all, ultimately earning 30 of a possible 33 voting points. From the Apostle Islands portfolio, meanwhile, there was no standout winning design; the closest came just shy of a 50-percent vote. After more discussion our decision was to not decide, but rather to request that the Mint “go back to the drawing board,” so to speak, and present another round of improved designs.

The designs of President Barack Obama’s two presidential medals (one for each term) had already been vetted by the White House and narrowed down to a couple slight variations. Our discussion of these bold and well-chosen motifs was largely administrative, with a quick vote by motion leading to our approval and official recommendations. These medals will feature portraits of the president and quotes by him: “Our destiny is not written for us. It is written by us.” (from his January 20, 2009, inaugural speech) and “The single most powerful word in our democracy is the word ‘we.’” They will be available for collectors in a bronze three-inch-diameter format, continuing a national medal series dating back to the early 1800s. 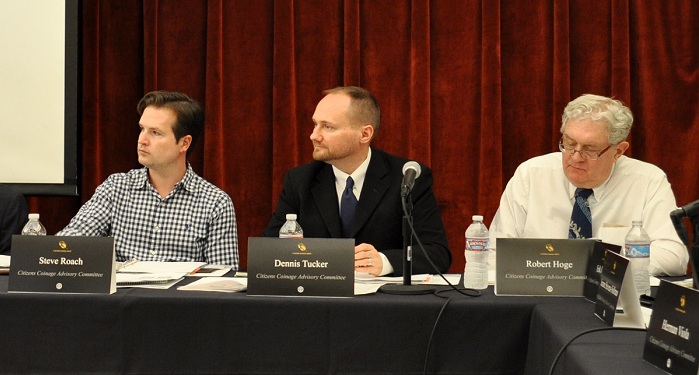 After the coin- and medal-design voting there were reports and updates by Mint personnel. Ron Harrigal, acting quality manager for manufacturing, led an interesting discussion of the recently legislated palladium bullion program. We then opened the floor to conversation with the 30 or 40 hobbyists in the public audience. This was a part of the CCAC meeting that everyone on the committee was looking forward to. We all recognized the valuable opportunity to listen to collectors’ and dealers’ opinions and to converse with our fellow hobbyists. (Earlier that evening many of us had dinner with Summer Seminar attendees in the college cafeteria, and the next morning we would share breakfast, but the public meeting offered a more formal, on-the-record conversation.)

Bob Campbell, owner of All About Coins, past president of the ANA, and a longtime contributor to the Guide Book of United States Coins, remarked on the upcoming palladium coinage, noting that for every one palladium coin he sells, collectors and investors buy 100 American Platinum Eagles. “The Mint might have to make its own market,” he observed (a challenge, but something the United States has achieved with great success in other bullion programs).

Taylor Elwood spoke about his increased understanding from attending the CCAC meeting: “I appreciate now how much effort and time is put into coinage design.” He remarked that the discussion and analysis makes him want to start collecting America the Beautiful quarters and their related five-ounce silver bullion coins. 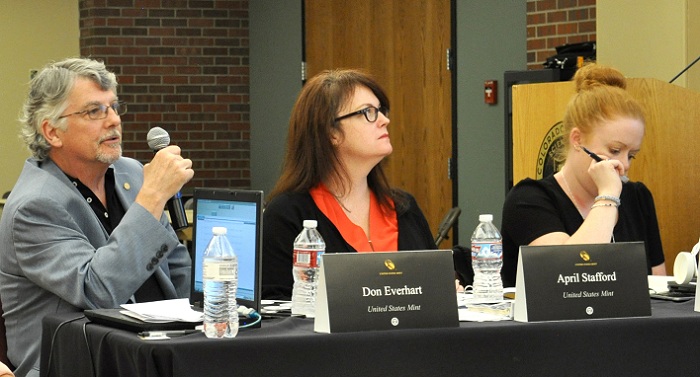 Kim Kiick, executive director of the American Numismatic Association, shared Elwood’s appreciation. “I enjoyed watching the process,” she said. “I learned things. It was very organized.” Kiick valued the opportunity to “hear the thought processes from 11 different perspectives and areas of expertise.”

Donald Scarinci, the senior-serving member of the committee, compared the 2016 meeting to another one held in Colorado Springs six years earlier. “The U.S. Mint is listening to us,” he said, “and listening to you.” He described the current CCAC meeting as being much more collegial than the 2010 meeting, and he had praise for the Mint, crediting its recent directors and current staff for the international awards and recognition won by U.S. coinage designs.

Numismatist Ross Johnson stood up to extol the appeal of classic coin designs such as the Mercury dime, the Standing Liberty quarter, and the Liberty Walking half dollar, noting that collectors love them and want to see them on current coins. “People like the idea of these designs not going away,” he said. “It venerates history and the best of our artistic heritage.” Bob Campbell agreed with Johnson, saying that the old designs represent hope. He told the assembled audience that the first thing his mother saw in America was the Liberty Walking half dollar and its message of hope. “Introduce them to a whole new generation,” Campbell urged, saying that modern versions of these classic designs would make good gifts for children in their birth years. Taylor Elwood concurred. 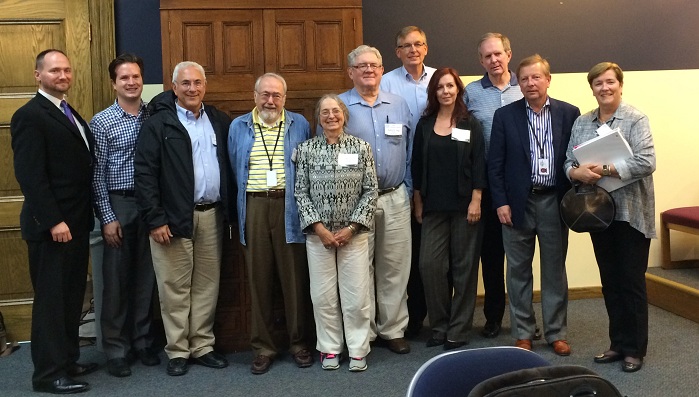 Another collector encouraged the use of high-relief designs in commemorative coinage. And in a packet delivered to me by Red Book senior editor Kenneth Bressett during a brief intermission in the meeting, former CCAC member Bill Fivaz laid out ideas he’s heard from collectors in recent years. I didn’t have time to read these ideas until after the meeting, but I’ll share them with the committee before our next gathering in September. They include: a desire for “no more dead presidents on coins” . . . eliminate the one-cent coin . . . eliminate the dollar bill in favor of the dollar coin, to encourage circulation of the latter . . . the Mint should be more customer-friendly . . . the Mint should be proactive in promoting numismatics on a broader level, through hobby clubs and organizations . . . consider higher-denomination coins for circulation . . . use allegorical figures on circulating coinage . . . and use higher relief on all coins, especially on Proofs. Some of these ideas are outside the bailiwick of the CCAC and even of the Mint itself, being at the Treasury or congressional level (for example, elimination of the dollar bill and introduction of high-denomination circulating coins). Others are definitely on the CCAC’s radar (e.g., using allegory and symbolism rather than photographic depictions of buildings, people, etc.).

All of these ideas are worthy of more discussion, and we thank everyone who came to the meeting for sharing their thoughts. As a reminder: the CCAC’s public meetings are open to everyone who can attend, and if you can’t be there in person you can call in and listen live. We want you to share your opinions—as Donald Scarinci said, the Mint is listening!