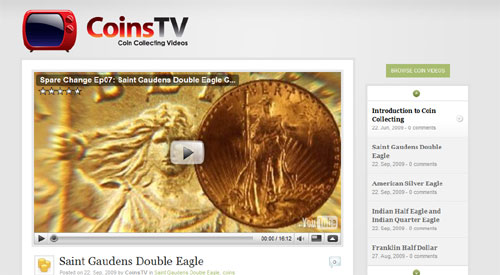 CoinsTV.com will be the official website of the video series “Spare Change: Coin Collecting Guide.” The website provides access to all previous episodes of the series and will be updated with new episodes as they are released.

Each coin video typically focuses on a specific coin series, such as the Saint Gaudens Double Eagles series, which was the focus of the most recent episode. The video provides a historical or legislative background for the series, information on the coin’s designer, coins specifications, key date coins, and suggestions on collecting or investing in the series. The information is presented in an informative and entertaining fashion, which new and advanced collectors will enjoy.

The website provides a separate page for each video that allows viewers to rate the video or provide comments. Visitors can also sign up to receive a notification whenever a new video is added to the website.

CoinsTV.com was created as a joint project of Michael Zielinski and Mark Apsolon.

Mark Apsolon is a guru of chromakey (green screen), video production, and lighting. Mark has been helping people make better videos with his free tutorials and detailed training DVDs on YouTube and MarkApsolon.com. He has also used these skills to create a series of popular videos related to coins and coin collecting that have gathered a significant following.