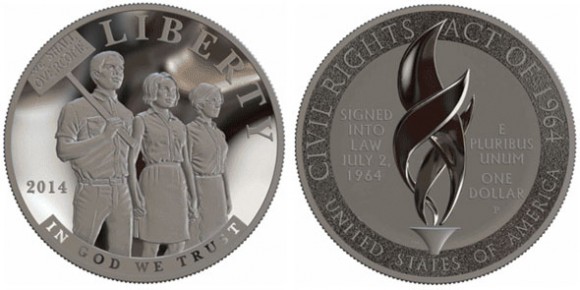 The selected obverse design features three people holding hands at a civil rights march with one of the people holding a sign that reads “We Shall Overcome”. This design is intended to be symbolic of all marches that helped galvanize the civil rights movement. Additional inscriptions include “Liberty”, the date “2014”, and the motto “In God We Trust”. The obverse was designed by Justin Kunz and engraved by Phebe Hemphill.

The reverse design depicts three flames intertwined to symbolize freedom of education, freedom to vote, and freedom to control one’s destiny. The inscriptions read “Civil Rights Act of 1964”, “Signed into Law July 2, 1964”, “E Pluribus Unum”, “One Dollar”, and “United States of America”. The reverse was designed by Donna Weaver and engraved by Jim Licaretz.

The 2014 Civil Rights Act of 1964 Silver Dollars will be available for purchase at the United States Mint starting on January 2, 2014. Each coin is struck in 90% silver and 10% copper with a weight of 26.73 grams and diameter of 1.5000 inches. The coins will be offered in both proof and uncirculated qualities.

According to a preliminary product schedule, the proof version will be priced at $49.95 and the uncirculated version will be priced at $44.95. These prices include a surcharge of $10 per coin, which will be distributed to the United Negro College Fund to carry out the purposes of the fund, which include providing scholarships and internships for minority students and operating funds and technology enhancement services for 39 member historically black colleges and universities.