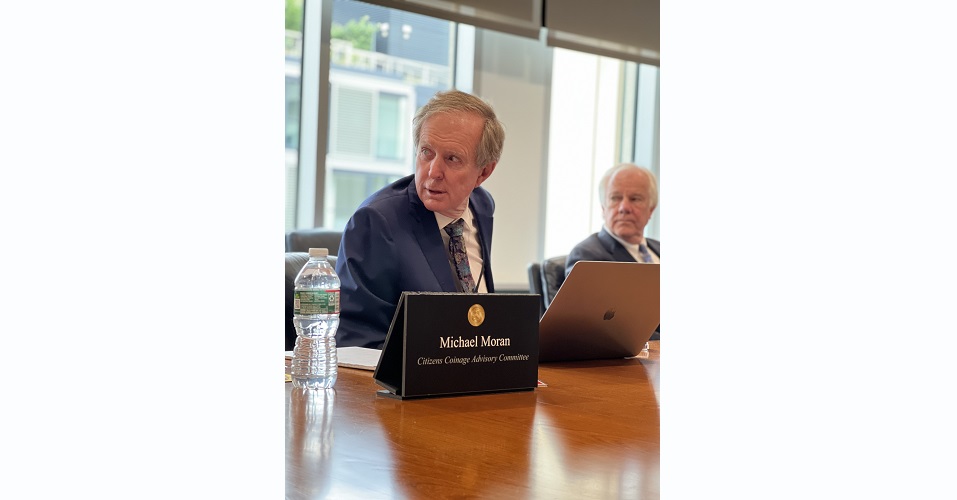 On Tuesday, June 14, 2022, the Citizens Coinage Advisory Committee met at United States Mint headquarters in Washington, DC, to review several coin and medal programs. After discussions, the committee made recommendations to Treasury Secretary Janet Yellen regarding the 2024 Native American dollar and the 2024 American Innovation dollars for Illinois and Alabama.

The group also reviewed designs for the Congressional Gold Medal to the United States Capitol Police and those who protected the U.S. Capitol on January 6, 2021, in addition to conducting other business.

Committee Chair Lawrence Brown welcomed nine of the CCAC’s other members in person, with the eleventh, Robin Salmon, participating virtually.

For the 2024 Native American dollar, the committee was addressed by Dr. Herman Viola, a curator emeritus of the Smithsonian’s National Museum of Natural History and a specialist on the history of the American West. Dr. Viola is a past member of the CCAC. He served from 2014 to 2018 as the committee’s American historian. 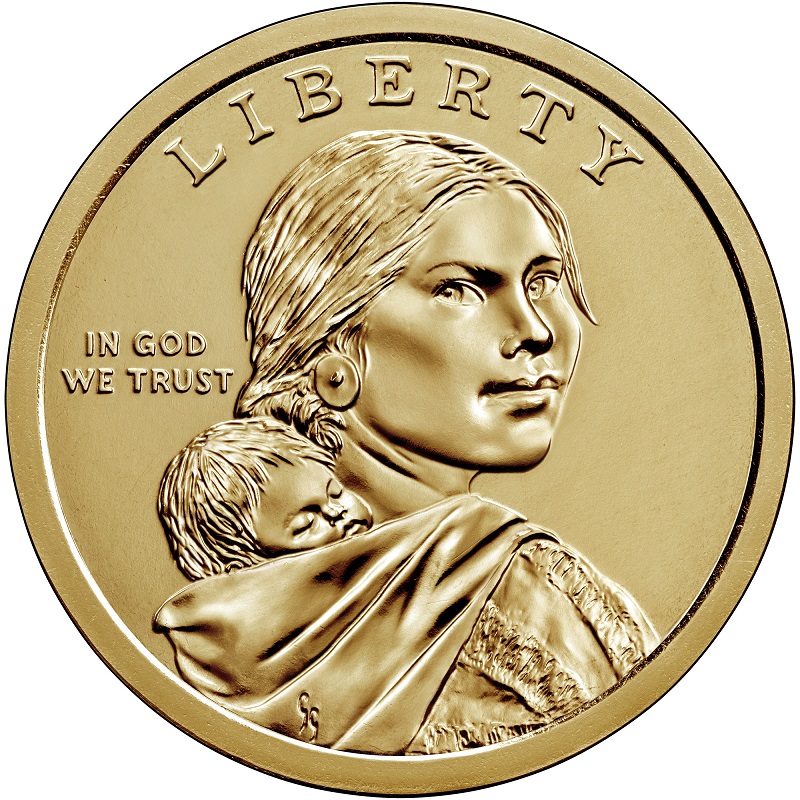 The 2024 Native American dollar will be the sixteenth in a series of coins celebrating the important contributions made by Indian tribes and individual Native Americans to the development of the United States and our nation’s history. The coins’ obverse features artist Glenna Goodacre‘s conceptual portrait of Shoshone guide and translator Sacagawea (who helped the Lewis and Clark expedition) and her son Pomp. The reverse of the Native American dollar has changed annually since the program started in 2009.

The subject of the 2024 coin is the Indian Citizenship Act of 1924, which granted citizenship to “all non-citizen Indians born within the territorial limits of the United States.” This federal act didn’t require American Indians to relinquish their tribal citizenship to become U.S. citizens. It allowed individuals to preserve their tribal identity and rights to communal tribal property.

Dr. Viola noted that a major factor in passage of the Indian Citizenship Act was the invaluable service of Native Americans in the Great War. If every American community had volunteered the percentage of able-bodied members that Native tribes did, Viola observed, there would have been no need for a national military draft. 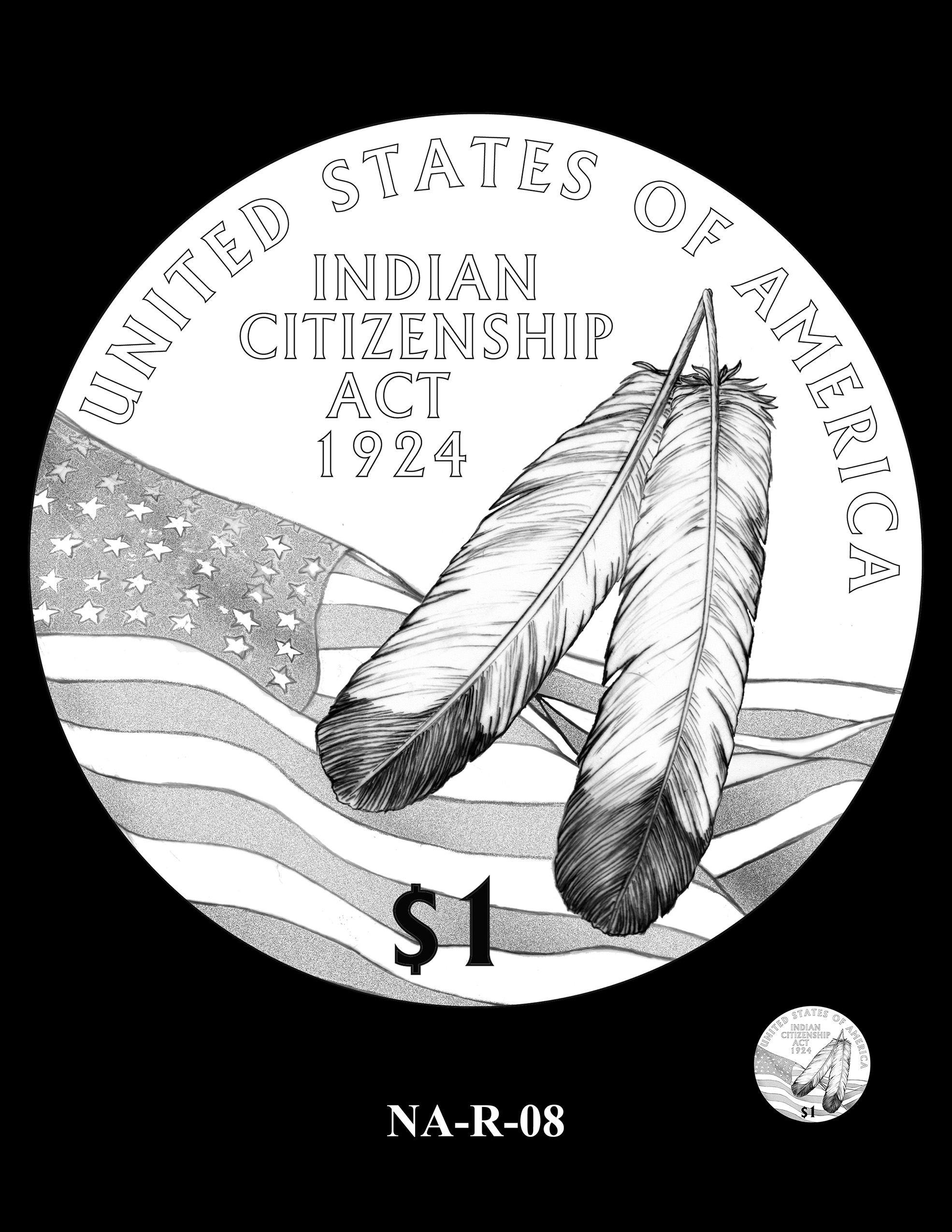 The CCAC reviewed 10 design candidates for the 2024 dollar. After discussion, including insight from Dr. Viola and Mint Chief Engraver Joseph Menna, the committee’s recommendation was for Design 08. This design features two eagle feathers and an American flag, representing the dual citizenship authorized by the 1924 act. 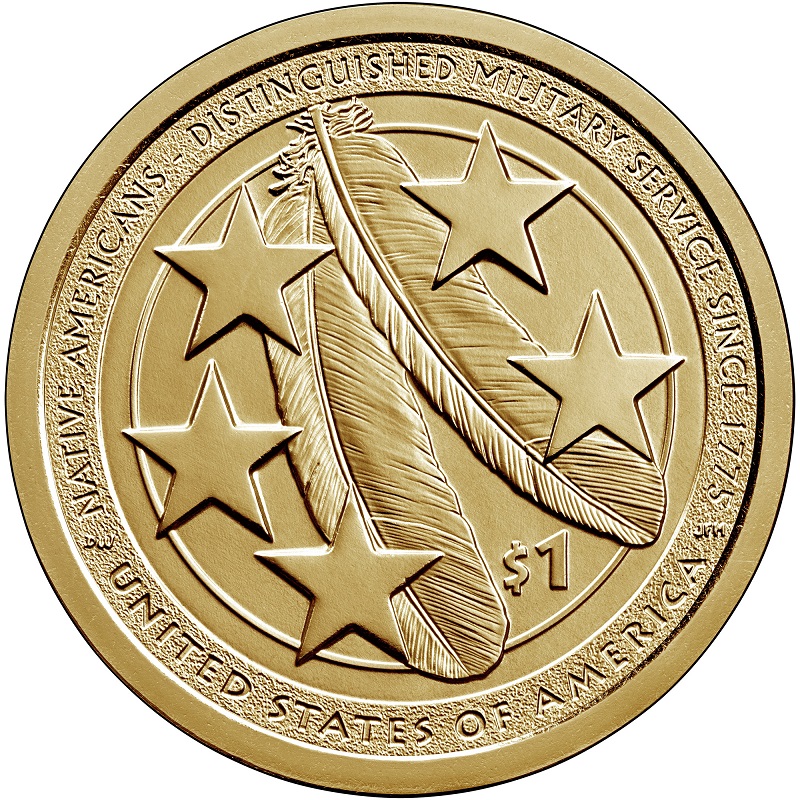 This design, interestingly, is reminiscent of the 2021 Native American dollar that honors American Indians in the U.S. military. 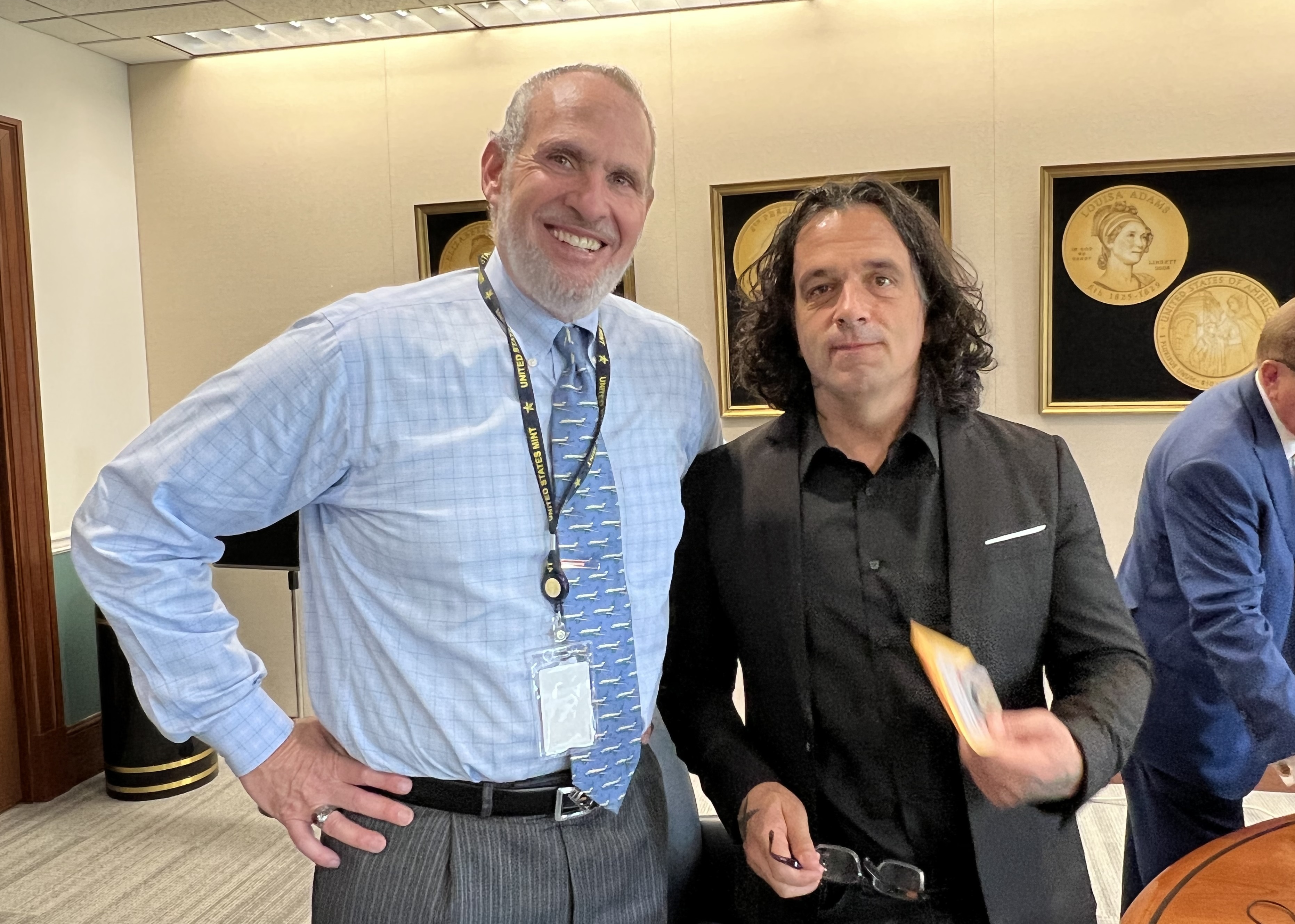 Another U.S. Mint coin program, that of American Innovation dollars, started in 2018 and will run through 2032. The coins are issued each year to symbolize quintessentially American exploration, discovery, and creativity. The fifty states and the five U.S. territories each get a coin to illustrate a significant innovation. Some have been tangible, such as scientific, medical, or engineering inventions, and others have been cultural, academic, musical, or otherwise non-physical. The coins share an obverse design of the Statue of Liberty, by artist Justin Kunz. 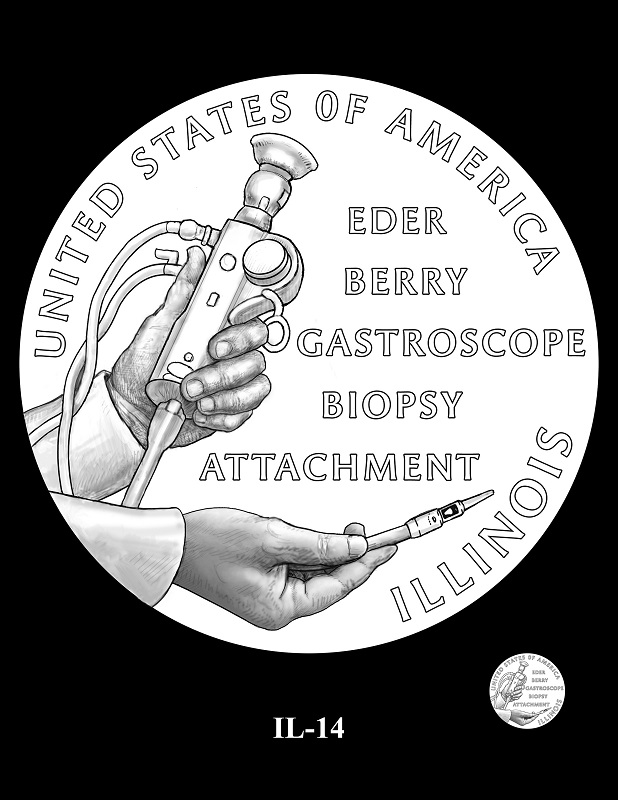 For Illinois’ dollar, Governor J.B. Pritzker recommended one of two themes—the steel plow, or the Eder-Berry biopsy attachment. CCAC Chair Lawrence Brown, a physician, spoke passionately about the life-altering importance of the latter medical invention, which takes tissue samples during gastroscopic exams and has revolutionized digestive-system health. Dr. Brown praised Reverse 14 as being an elegantly crafted depiction of the device in a doctor’s hands.

More of the committee gravitated toward the theme of the steel plow, first popularly manufactured in Illinois in the 1830s. Its invention was “groundbreaking,” as Governor Pritzker’s liaison, Lee LoBue, punned. The steel plow was an improvement over wooden plows that were no match for the Midwest’s dense sod. It brought the Industrial Revolution to American agriculture and helped open the nation’s westward migration through the 1800s. 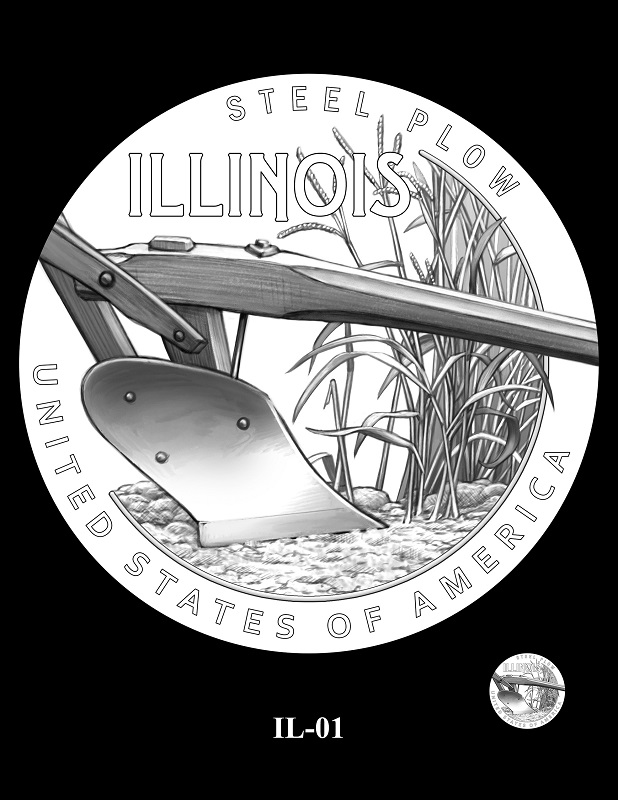 The CCAC reviewed and discussed eight different designs for the steel-plow theme. Some designs focused centrally on the plow itself, highlighting its blade and other physical features, while others showed steel plows in action, with farmers and horses tilling the land. After discussion, the committee’s strong endorsement was for Design 01. It shows a plow blade affixed to a beam and braces, prominently situated in a field of soil and a stand of Big Bluestem prairie grass.

The Mint, in its background information to the CCAC, described the Saturn V rocket as generating more power, at launch, than 85 Hoover Dams. “Initially developed to support the Apollo program for human exploration of the Moon, a total of 13 Saturn V rockets were launched between 1967 and 1972 from the Kennedy Space Center with no loss of crew or payload. As of 2022, the Saturn V remains the tallest, heaviest, and most powerful (highest total impulse) rocket ever brought to operational status and remains the only launch vehicle to carry humans beyond low Earth orbit.” 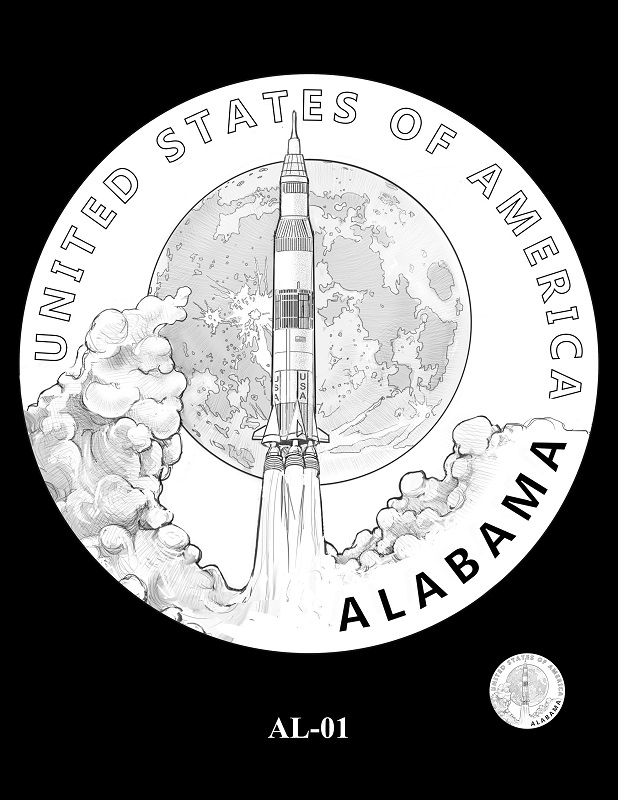 The CCAC reviewed a portfolio of 11 design candidates for Alabama’s Saturn V dollar coin. The committee discussed various aspects of the designs, some of which featured dramatic perspectives of the rocket and NASA-style lettering. After discussion of technical and artistic features, the committee strongly recommended Design 01, which shows a full-length view of the Saturn V rocket lifting off with the Moon in the background. It also recommended that the Mint and Alabama’s liaisons consider the addition of the phrase “Saturn V” and the potential use of NASA-style lettering. 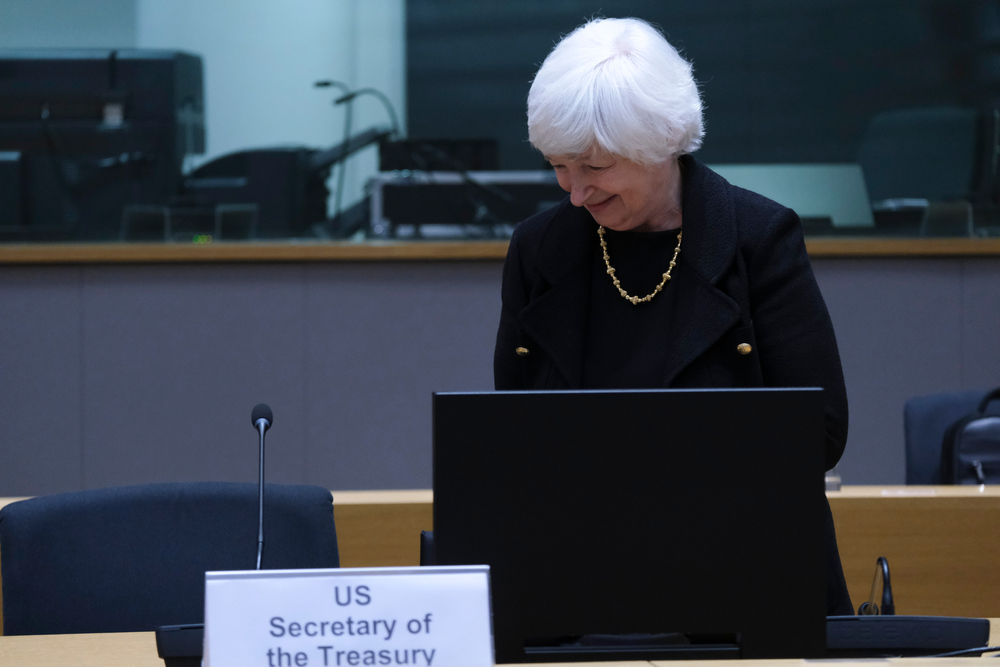 What’s Next for the 2024 Dollar Coins

The CCAC is a congressionally authorized public committee that advises the Secretary of the Treasury on matters relating to U.S. coins and national medals. A second body, the U.S. Commission of Fine Arts, will also review potential designs for the 2024 American Innovation and Native American dollars.

The CCAC and the CFA will each give formal recommendations to Treasury Secretary Janet Yellen. She will then make the final decisions on the coins’ designs.

The designs will be professionally sculpted by engravers at the Philadelphia Mint, and then hubs and dies will be made for coinage production. All of the American Innovation dollars and (since 2011) all Native American dollar coins are struck for numismatic sales only. None are made for circulation. Instead, they’re minted for sale to collectors, as Proof coins and in rolls, bags, and other finishes and formats.

In addition to reviewing coin and medal design portfolios in its June 14 meeting, the CCAC agenda also included public recognition of two retired committee members (Thomas Uram and Jeanne Stevens-Sollman); presentation of four new program recommendations; and discussion of coin and medal ideas suggested by members of the public. The Committee’s next public meeting is scheduled for September 2022.