In 1992, the quincentenary or 500th anniversary of the historic voyage of Christopher Columbus to the Americas was celebrated with the issuance of three commemorative coins from the United States Mint. The program included extremely high maximum mintage levels likely formulated with the expectation that the coins would be heavily ordered by the general public.

The obverse design for the half dollar featured a scene of Columbus landing in the new world with the Santa Maria visible in the background. The reverse featured all three ships of Columbus’ voyage the Nina, Pinta, and Santa Maria. The obverse inscriptions include the dates “1492” and “1992” and the reverse includes the caption “500th Anniversary of Columbus Discovery”. 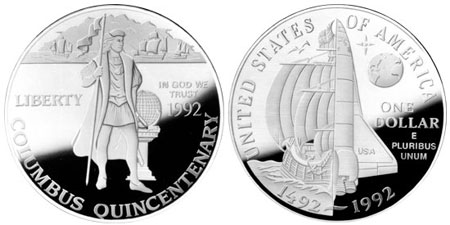 The silver dollar obverse design featured a full length portrait of Columbus holding a banner in his right hand and a scroll in his left. A globe appears to his side and three ships appear above. The reverse design includes the split image of the Santa Maria and the U.S. Space Shuttle Discovery to contrast explorations of the past and present. An inscription on the obverse states “Columbus Quincentenary”. 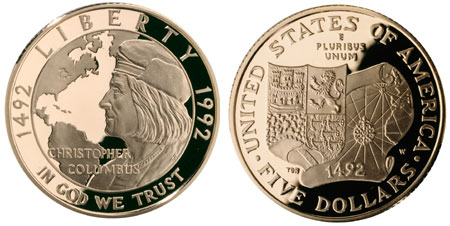 The $5 gold coins featured a profile portrait of Columbus facing a map of the New World on the obverse. The dates “1492” and “1992” appear to either side. On the reverse is the Crest of the Admiral of the Ocean Sea, the rank given to Columbus by Ferdinand and Isabella, which overlaps a map of the Old World, which carries the date “1492”. 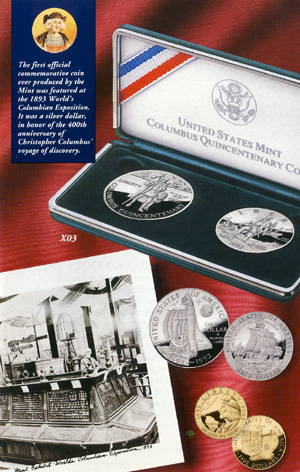 Although the program did not seem to attain the measure of success anticipated, the program did bring the United States Mint commemorative coin program full circle. As noted within promotional materials, the first official commemorative coin ever produced by the Mint was the Columbian Half Dollar, produced in honor of the 400th anniversary of Columbus’ voyage and issued at the 1893 World’s Columbian Exposition. Across two dates of issue, this early commemorative coin had a mintage of 2,500,405, or more than double the collective mintage for the three coins of the modern program.