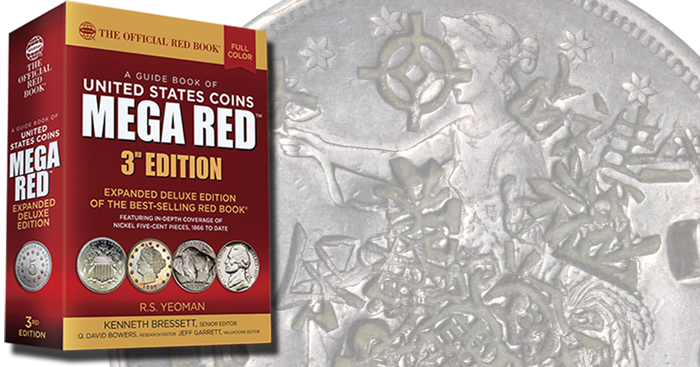 (Pelham, Alabama)—The third edition of MEGA RED (the Deluxe Edition of the Guide Book of United States Coins) features several new appendices covering hobby-related topics. One is a 10-page illustrated study of chopmarks and chopmarked coins by Colin Gullberg, founder of the Chopmark Collectors Club (a member society of the American Numismatic Association) and editor of Chopmark News. MEGA RED retails for $49.95 and is available online and from booksellers nationwide.

Gullberg defines “chops” as personal stamps that intermediaries known as shroffs would punch into inspected silver coins to guarantee they were of good silver and acceptable in trade. The practice started in China in the mid-1600s and took place into the early 1930s. He describes chopmark collecting as an exciting field with many discoveries waiting to be made. “A chopmark collector is like an explorer,” Gullberg writes. “You never know what you will find next.”

The author begins with a history of how silver flowed throughout the world, and especially into China, from the 1500s through the 1800s. He explores the influence of Japan in silver exporting, Europe’s China Trade, and important silver trade coins such as the Spanish 8-reales “cob,” Mexican Portrait or Bust dollars, Pillar dollars, and the famous U.S. trade dollar.

“Most American collectors come into contact with chopmarked coins when they start a trade dollar collection,” Gullberg writes, “yet few have even the scantiest knowledge of this fascinating area of numismatics. Chopmarks played a central role in the use of silver in the China Trade and involved the coinage of dozens of nations and thousands of merchants and money changers over a period of 300 years.”

The study is illustrated with 30 photographs of U.S. and foreign coins, and types of chops including incuse and relief, large and small, Chinese characters and pseudo-characters, and even ink chops. Gullberg also discusses and illustrates assay chops and wedding chops.


For collectors, Gullberg analyzes three broad categories of pricing for chopmarked coins: Group 1, comprising common trade coins from the United States, Britain, Japan, France, and Spain, made specifically for business use in China or commonly circulated there; Group 2, very rare coins, including key dates or mints from Mexico and other countries; and Group 3, non-trade coins commonly found with chopmarks, including Morgan dollars, British shillings, Salvadoran pesos, Russian roubles, and others.

He then lays out his advice for collecting chopmarked coins, giving strategies for focusing on American coins, non-U.S. coins, type coins, and collecting by chop. 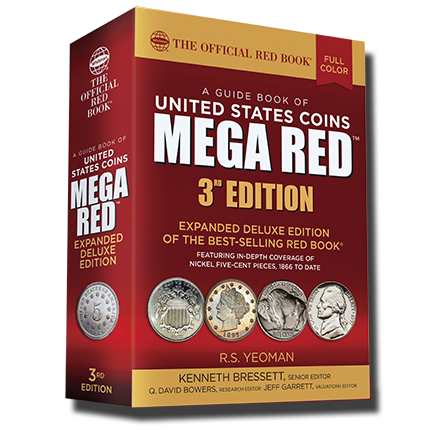 Billed as the “biggest, most useful Red Book ever,” MEGA RED measures 7 x 10 inches and has 1,040 more pages than the regular edition. The larger size and increased page count combined make MEGA RED five times bigger than the regular-edition Red Book. It prices 8,200 items in up to 13 grades each, with 48,000 individual values and 15,400 auction records covering circulated, Mint State, and Proof coinage. The book is illustrated with 7,000 images, including 2,434 that are new to the third edition.

The third edition of MEGA RED officially debuted at the Whitman Coin and Collectibles Baltimore Expo, March 30, 2017, and now is available nationwide. MEGA RED retails for $49.95 and is available online (including at Whitman.com) and from booksellers and hobby shops nationwide. Whitman Publishing is the Official Supplier of the ANA, and Association members receive a 10% discount off all purchases.

Whitman Publishing is the Official Supplier of the American Numismatic Association. As a benefit of membership in the ANA, members can borrow the Red Book (and other Whitman books) for free from the Association’s library, and also receive 10% off all Whitman purchases. Details are at www.money.org.