The People’s Bank of China has issued two new coins to launch a series highlighting some of the country’s “money and assembly halls” located in various cities and towns in China. The series begins with the 90th anniversary celebration of the Money Hall of Ningbo. An important seaport 2,000 years ago and a terminus of the fabled Silk Road, the name Ningbo means “calm waves,” a reference to the way its harbor is shielded from high winds and ocean tumult by a ring of mountains and outlying islands.

Ningbo has served as an historic port on the Maritime Silk Road from ancient times. Its close proximity to Shanghai helped the local “money exchange houses” to develop rapidly following the city’s economic emergence. Over time, national capital was accumulated in banks in Shanghai, China’s financial capital; the banks’ wealth found its way back into the people’s hands in Ningbo. For this practical reason, there was a need to construct and develop the purpose-built Ningbo Money Industry Assembly Hall, which was built between 1924 and 1925, and was officially inaugurated in 1926.

With an area of 1,500 square meters, the hall provided a practical venue for gatherings and trading for people working in the financial sector. In September 1994, the Ningbo Numismatic Museum was built on the Money Hall’s former site, making it the only museum that displays a full range of numismatic products in a medium-sized city in China. In May of 2006, the Hall was listed as one of the major historical and cultural sites protected at the national level by the State Council of China. The building compound represents the pinnacle of Chinese architecture in the Republic of China era (1912-1949). 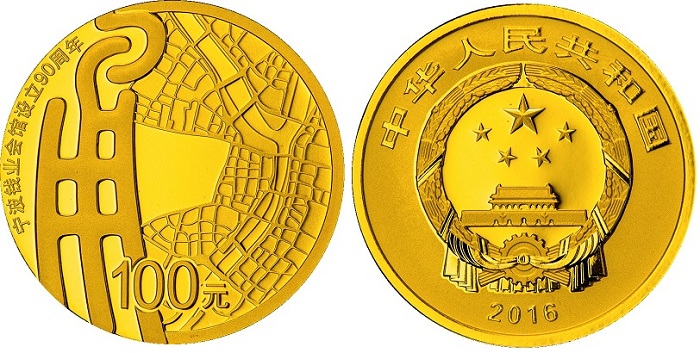 100 Yuan gold: The obverse features the Chinese character “yǒng,” a shorter name for Ningbo, against a bird’s eye view of the confluence of three rivers in the area. The commemorative text “The 90th Anniversary of Ningbo Money Industry Assembly Hall” in Chinese is also depicted, along with the face value of 100 yuan. The reverse design features the national emblem of the People’s Republic of China, the title of PRC in Chinese characters above the emblem, and the year of issue. 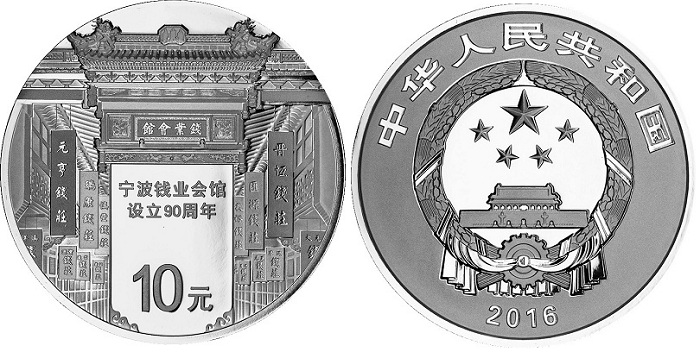 10 Yuan silver: The obverse design features part of the main gate of the Ningbo Money Industry Assembly Hall, accompanied with a detailed view of its interiors. The words “The 90th Anniversary of Ningbo Money Industry Assembly Hall” in Chinese is included with the face value. The reverse design features the national emblem of the People’s Republic of China, the title of PRC in Chinese characters above the emblem, and the year of issue.

Each coin is sold separately. For more information on these and other coins offered by the China Gold Coin Incorporation, please visit the Web site of China Great Wall Coins Investment, or e-mail their office at  to find an approved distributor near you. Information is offered in Chinese.