The United States Mint has indicated that they will begin accepting orders from authorized purchasers for the America the Beautiful Silver Bullion Coins featuring Chickasaw National Recreation Area starting on July 18, 2011. Overall, this will represent the tenth design released for the oversized bullion coin program and the final design released for the current year. 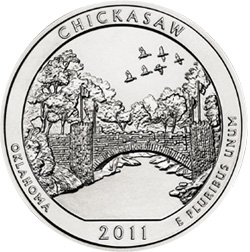 Designs for the ATB Silver Bullion Coins replicate those found on the series of circulating quarter dollars. The reverse features a representation of a National Park or other federally designated area from each of the 50 states, the District of Columbia, and the five U.S. territories. Chickasaw National Recreation Area was selected for the state of Oklahoma.

The reverse design features a view of Lincoln Bridge, which was dedicated in 1909 to celebrate the centennial of Abraham Lincoln’s birth. Inscriptions include “Chickasaw”, “Oklahoma”, “2011”, and “E Pluribus Unum”. This was designed by Donna Weaver and sculpted by Jim Licaretz. The obverse features the 1932 portrait of George Washington by John Flanagan.

The United States Mint will be offering the Chickasaw Five Ounce Silver Bullion Coins to authorized purchasers on an allocated basis. An initial quantity of 126,700 coins will be made available. This may be increased above the initial quantity based on market demand. The same quantity of coins were made available for the four designs previously released in 2011 featuring Gettysburg National Military Park, Glacier National Park, Olympic National Park, and Vicksburg National Military Park.

The entire quantity of 126,700 units for the Gettysburg and Glacier designs has sold out at the authorized purchaser level. The pace of sales for the subsequent two design releases has been slower.

Authorized purchasers are allowed to purchase gold and silver bullion coins directly from the United States Mint in bulk quantities based on the current precious metals price plus a fixed or percentage mark up. In turn, the coins are resold to other bullion dealers, coin dealers, and the public. Authorized purchasers also create a liquid two way market for US Mint issued bullion products.