Chickasaw National Recreation Area, located in south central Oklahoma, was named to honor the Chickasaw Indian Nation, who were relocated to the area during the 1830’s. The park was originally established in 1902 as the Sulphur Springs Reservation, renamed and re-designated as the Platt National Park in 1906, and was combined with the Arbuckle Recreation Area in 1976. 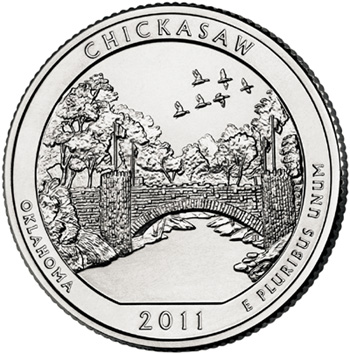 The Chickasaw National Recreation Area Quarter depicts the Lincoln Bridge, built of limestone and dedicated in 1909 to celebrate the centennial of Abraham Lincoln’s birth. The bridge was the first constructed improvement in the national recreation area and a favorite scenic spot.  Also included in the design are the incused phrases “Chickasaw”, “Oklahoma”, and “E Pluribus Unum”, as well as the date of issue. The coin will represent the fifth and final issue of the United States Mint’s America the Beautiful Quarters Program for 2011.

The official circulation release date for the coin will be November 14, 2011. Two days later on November 16, an official launch ceremony will take place in Flower Park on the grounds of the national recreation area.

The Chickasaw Quarter is or will be available from the U.S. Mint in the following products: