The 2011-P Chickasaw National Recreation Area Five Ounce Silver Uncirculated Coin went on sale at the United States Mint on February 9, 2012. This is the tenth release in the numismatic series of America the Beautiful Five Ounce Silver Coins. 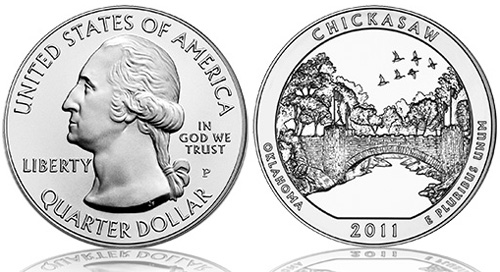 The reverse design was selected to represent Chickasaw National Recreation Area in Oklahoma. It features a depiction of Lincoln Bridge, built in limestone and dedicated in 1909 for the 100th anniversary of the birth of Abraham Lincoln. The bridge has become a favorite scenic destination within the national site. Inscriptions placed within a circular area around the circumference of the coin include “Chickasaw”, “Oklahoma”, “2011”, and “E Pluribus Unum”.

The obverse design features a portrait of George Washington, from the 1932 Washington Quarter. The inscriptions include “United States of America”, “Liberty”, “In God We Trust”, “Quarter Dollar”, and the “P” mint mark for Philadelphia.

Each coin contains 5.0 troy ounces of .999 fine silver with a diameter of 3 inches. The weight and fineness of the coin are indicated by incuse edge lettering. The coins have an uncirculated finish created through a vapor blasting technique and are placed into a capsule with protective outer box and certificate of authenticity.

The Chickasaw Five Ounce Silver Uncirculated Coins are limited to a total mintage of 35,000 coins. The price for each coin is currently $204.95, with no household order limited imposed.