The Royal Mint have launched (5th December) a new coin commemorating the 200th birthday of literary giant Charles Dickens. The coin features a profile of the author created from the titles of some of his most famous works.

Born on 7 February 1812, Charles Dickens is considered to be the quintessential Victorian author, with his unforgettable and often harsh depiction of nineteenth-century life.  Drawing on subject matters from his own experiences, alongside inspiration from friends and family, his characters from novels including David Copperfield, Great Expectations and Oliver Twist have become true icons of English literature. 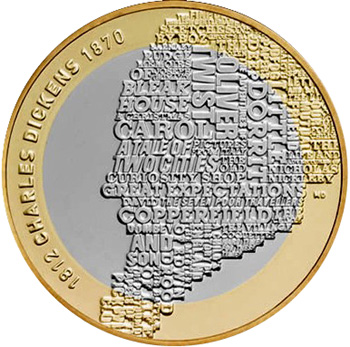 Artist Matthew Dent (who designed the reverse of the current “coat of arms” British circulation coins) has arranged well known titles from Dickens’ novels to create a unique and innovative portrait of the author, literally in his own words.  From his Sketches by Boz, to his last and unfinished novel, The Mystery of Edwin Drood, the coin is a uniquely styled bibliography of Dickens’ literary masterpieces, referencing much loved classics including The Old Curiosity Shop, Nicholas Nickelbey and A Christmas Carol. The inscription next to the portrait reads “1812 CHARLES DICKENS 1870”.

On the edge of the coin is an inscription which features the quotation “Something Will Turn Up”, spoken by the ever optimistic Wilkins Micawber in David Copperfield, Dickens’ own favourite story. A character based on Dickens’ own father, Micawber’s name has become synonymous with someone who lives in hopeful expectation.

The obverse of the coin includes the well-known effigy of HM Queen Elizabeth II sculpted by Ian Rank-Broadley along with the coin’s denomination and year “2012”.

The bi-metallic coin is struck in both cupro-nickel (centre disc) and nickel-brass (outer ring) with a combined weight of 12 grams and a diameter of 28.4 mm.  The circulation strikes of this coin are expected to be released in the spring 2012.Celebrating a great literary past during this Christmas season, the Charles Dickens £2 Brilliant Uncirculated commemorative coin in a special presentation folder is available from the Royal Mint website. Precious metal versions of this exceptional coin (Gold and Silver) will be available from 30th January 2012.