The Royal Mint have launched (24th February) the precious metal versions of the hugely popular Charles Dickens £2 coin, which was issued for the 200th anniversary of the author’s birth. 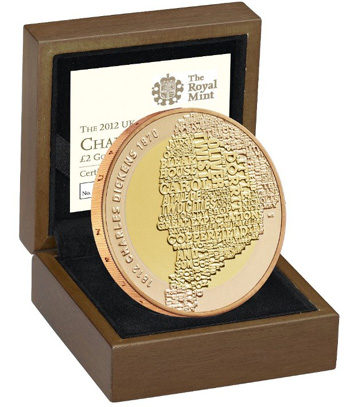 The coin, designed by Graphic artist Matthew Dent (who designed the reverse of the current “coat of arms” British circulation coins), includes much-loved titles and works of the author in a style creating a recognizable profile of Charles Dickens. The base metal coin was launched on the 5th December 2011 and has become one of the most sought-after commemoratives in the £2 series. The inscription positioned to the left side of the portrait reads “1812 CHARLES DICKENS 1870”. The edge lettering around the rim reads “SOMETHING WILL TURN UP” spoken by the ever optimistic Wilkins Micawber in David Copperfield, Dickens’ own favorite story. A character based on Dickens’ own father, Micawber’s name has become synonymous with someone who lives in hopeful expectation. 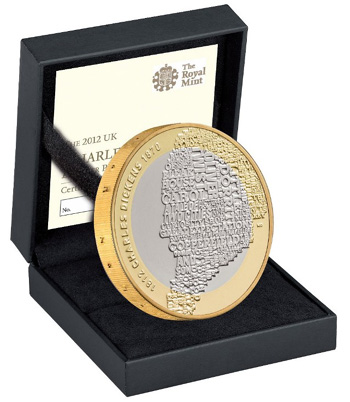 The sterling silver version includes a gold plated outer ring giving it a bi-metallic effect. The coin weighs 12 grams also with a diameter of 28.4 mm. The mintage for the silver coin is limited to 8,000 pieces. A piedfort version (24 grams) of the silver example is also available with a limited mintage of 2,000 pieces.

The Gold, Silver and Silver Piedfort commemorative £2 coins are available to pre-order now from The Royal Mint website www.royalmint.com