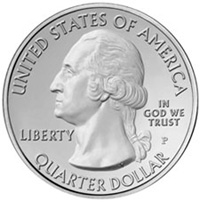 Later this year, the United States Mint will begin offering a new silver bullion investment coin. The coins will feature the designs of the America the Beautiful Quarters and contain five ounces of .999 fine silver. A recently introduced bill seeks to change some of the requirements for the coins.

Reports indicate that production of the America the Beautiful 5 ounce silver coins has already begun. The US Mint plans to strike 100,000 pieces for each of the five 2010 designs. The official release date as well as the premiums for the coins have not yet been provided.

Since the new offering is classified as bullion, the coins will be distributed through the US Mint’s authorized purchaser network. The authorized purchasers are able to buy bullion coins directly from the Mint in bulk quantities and then resell them to other bullion and coin dealers as well as the public.

Despite the fact that some of the first coins have already been struck, the bill H.R. 6162 proposes changes to design and specification requirements. The same bill also seeks increased Congressional oversight of circulating coin production and amendments to the law concerning the issuance of American Silver Eagles.

The specified changes are likely in response to production challenges that the United States Mint had encountered earlier in the year during trial strikes. Since coin production is already underway, the specification changes may no longer be necessary. Provided the bill becomes law, the US Mint would seemingly have a choice of retaining the original specifications for future production, or adopting different specifications allowed under the amended law.