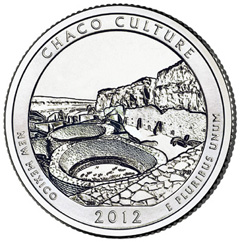 A launch ceremony and coin exchange have been scheduled for the Chaco Culture National Historical Park Quarter. This coin represents the twelfth overall release within the America the Beautiful Quarters Program that features national parks or sites from each of the states, territories, and the District of Columbia.

The Chaco Culture Quarters were released into general circulation on April 2, 2012, with sales of numismatic bags and rolls beginning at the United States Mint on the same day. The reverse design of coins depicts a view to the west of two elevated kivas that are part of the Chetro Ketl Complex, the north wall of Chetro Ketl, and the north wall of the canyon.

The official launch ceremony held by the United States Mint and National Park Service will take place on Thursday, April 26, 2012 at 10:30 AM MT. The location will be the Chaco Culture National Historical Park Visitor Center, 1808 RD 7950, Nageezi, NM 87037.

Attendees will include Richard A. Peterson, Deputy Director of the United States Mint; Barbara West, Superintendent of the park; and Theresa Pasqual, Director of Acoma Historic Preservation Office. Nearly 200 schoolchildren from around the region will also be in attendance. Members of the public  who attend the ceremony will be able to exchange currency for rolls of the new quarters at face value.

The evening before the ceremony on April 25 at 6:30 PM MT, the United States Mint will host a coin forum at the Gateway Park Museum and Visitor Center, at 3041 East Main Street in Farmington, NM. This will provide an opportunity for the public to learn about upcoming coin programs and initiatives and express their views on future coinage.