During their most recent meeting, the Commission of Fine Arts (CFA) reviewed the design candidates for the Congressional Gold Medal to be issued honoring the World War II members of the Civil Air Patrol (CAP) and provided their recommendations.

Under Public Law 113-108, enacted on May 30, 2014, a single Congressional Gold Medal was authorized to be awarded to the World War II members for the Civil Air Patrol in recognition of their exemplary record during World War II. The unpaid volunteer civilian members of the Civil Air Patrol had used their own aircraft to perform a myriad of essential tasks for the military and the Nation during World War II, logging more than 500,000 flying hours, sinking two enemy submarines, and saving hundreds of crash victims. 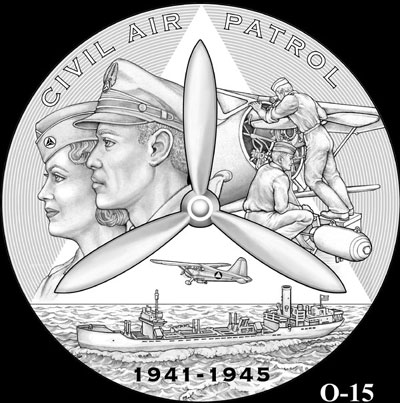 From the available candidates, the CFA recommended obverse design alternative #15 as the most elegant composition and the most illustrative of the range of duties and people involved in the Civil Air Patrol. The design features the CAP roundel at center, dividing the space into three equal segments which represent the pilots, the support crews, and the CAP mission itself. At the left are two CAP pilots in profile. To the right, a ground support crew prepares a plane for its mission. At the bottom is a depiction of one of the many important missions undertaken by the CAP. 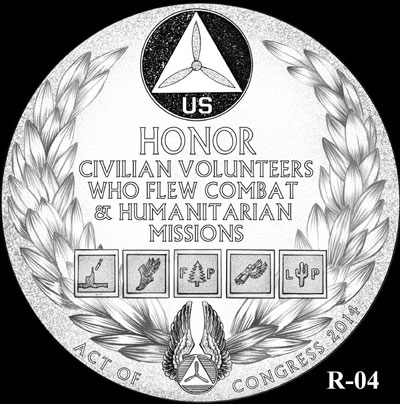 For the reverse, the CFA recommended design alternative #4, which contains a laurel wreath representing honor and service, surrounding CAP insignias. The inscriptions read “Honor Civilian Volunteers Who Flew Combat & Humanitarian Missions” and “Act of Congress 2014”. The CFA suggested careful consideration of the typefaces so the pairing of the obverse and reverse result in a well-composed medal.

At a separate meeting, the Citizens Coinage Advisory Committee (CCAC) was also given the opportunity to review the same slate of design candidates for the WWI Civil Air Patrol Congressional Gold Medal.

The CCAC had recommended design alternative #14 for the obverse, which depicts two CAP pilots with the CAP roundel shown above. At the base of the design, an armed single-engine CAP aircraft is shown lifting off from the runway. For the reverse, the CCAC recommended alternative #3, which features the CAP insignia with inscriptions ‘Eyes of the Home Skies” and “Act of Congress 2014”.

The responsibility to select the final designs for the medal rests with the Secretary of the Treasury.