The Commission of Fine Arts (CFA) recently provided their recommendations for three Congressional Gold Medals which will be awarded in honor of the men and women who perished as a result of the terrorist attacks of September 11, 2001. The three medals carry designs to honor the victims of the attacks at the World Trade Center in New York, the Pentagon in Virginia, and the crash of Flight 93 in Pennsylvania.

Following the award, the Congressional Gold Medals are to be given the National September 11 Memorial and Museum in New York, Pentagon Memorial at the Pentagon, and the Flight 93 National Memorial in Pennsylvania for permanent display. The Secretary of the Treasury is also authorized to strike duplicate versions of the medals in bronze for sale to the public.

The United States Mint prepared separate sets of candidate designs for the obverse and reverse of each medal. View the entire slate of design candidates for New York, Virginia, and Pennsylvania.

From the available design candidates for the New York Medal, the CFA members recommended obverse #8 and reverse #13 with suggested modifications. For the obverse, they supported the balanced composition and abstract depiction of the World Trade Center towers, but noted the difficulty reading the phrase “Always Remember” due to the background texture. They suggested shortening the phrase to improve legibility. For they reverse they suggested removing one of the roses from the composition and removing the comma after the word “countries”.

For the Pentagon Medal, the CFA recommended obverse #9 and reverse #8. On the obverse they suggested removing the plantings along the Pentagon facade to simplify the composition. They generally supported the emphasis on text for the reverse and noted the inclusion of an eagle, which they did not favor for inclusion on the obverse. 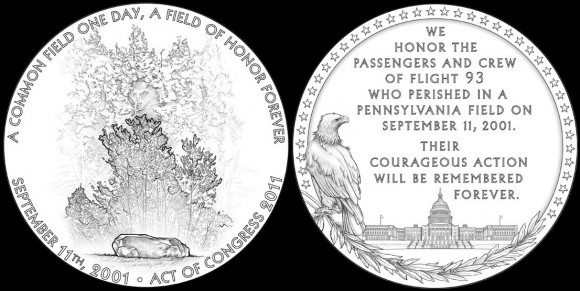 At a separate meeting the Citizens Coinage Advisory Committee had offered their recommendations for the Fallen Heroes of 9/11 Congressional Gold Medals. They favored different alternatives for the obverses of the New York and Pentagon medals, but offered the same recommendations as the CFA for the reverse designs and Pennsylvania Medal pairing. Coverage of the CCAC meeting and recommendations can be found here.

The authority to make the final design selections for the medals rests with the Secretary of the Treasury.